Ir Amim reports that on March 2nd the Jerusalem Planning Committee will consider a brand new plan to expand the area of theGivat Hamatos settlement in East Jerusalem by 40% and to more than double the number of housing units slated to be built there. The new plan – called the “East Talpiyot Hill” plan – involves the construction of 3500 units and 1300 hotel rooms, to be built on a plot of land adjacent to the site where the Givat Hamatos settlement (planned for 2610 units) is slated to be built. As a reminder: tenders for the construction of those units were issued in January 2021 (just hours after PResident Biden was inaugurated), and the construction of the infrastructure for that project is already underway. 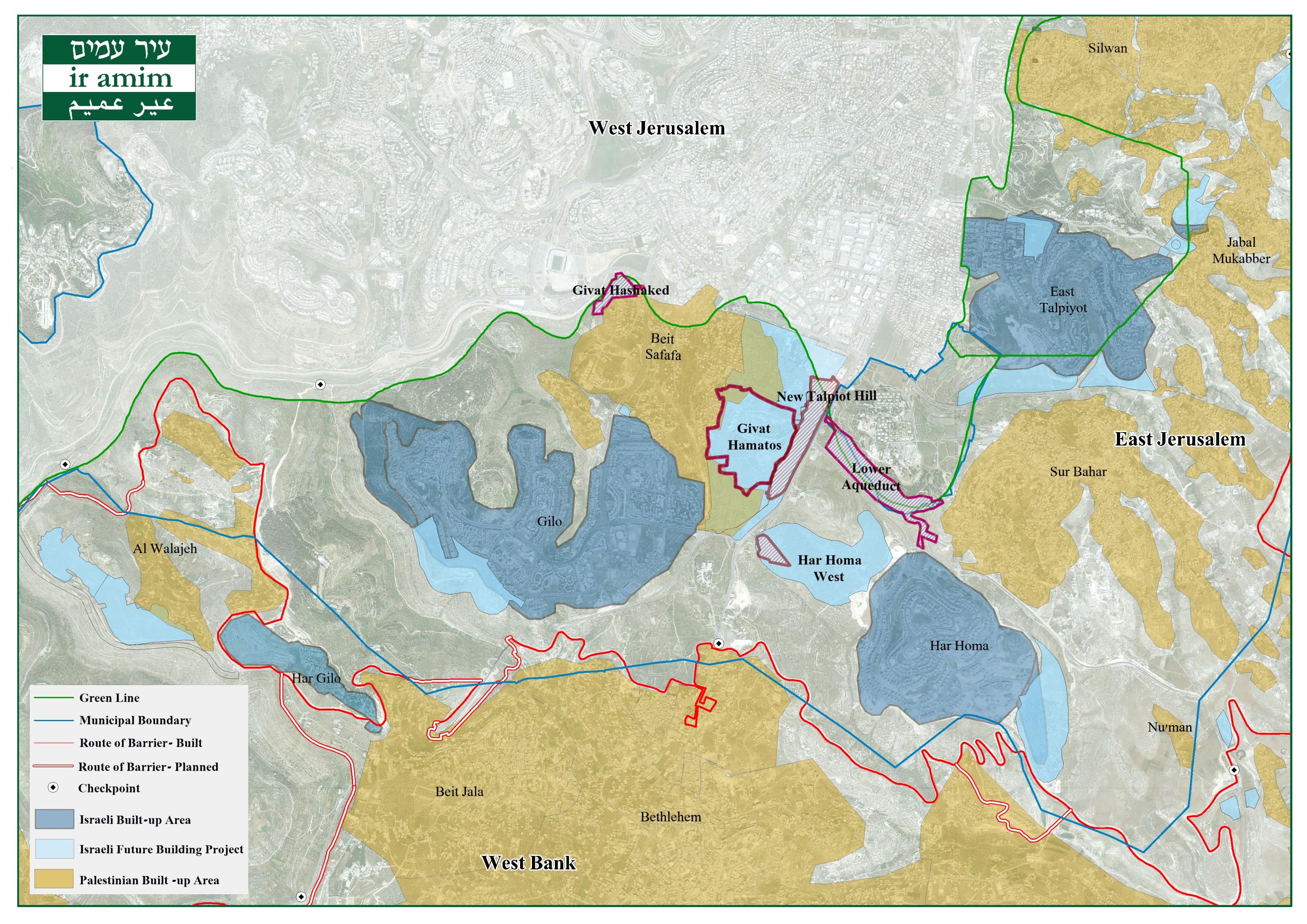 The “East Talpiyot Hill” plan involves construction on a strategic strip of land that will expand the area of Givat Hamatos eastward, connecting it with another new settlement plan – the “Lower Aqueduct Plan.” These plans ultimately create a string of settlements — spanning from Gilo to Givat Hamatos to Har Homa — that, together with the planned “Givat HaShaked” settlement to its north, completely encircle the East Jerusalem Palestinian neighborhood of Beit Safafa with Israeli settlement construction. Ir Amim further warns that the inclusion of hotels in this new plan “will likely serve as a major source of competition with the tourism industry in Bethlehem, potentially diverting vital business from the Palestinian economy.”

This land on which the “East Talpiyot Hill”project will be built was owned by the Greek Orthodox Church until 2009 – when the church sold many of its most prized properties to settler entities. The Church has contested these sales, alleging fraud – but Israeli courts have rejected the Church’s objections and allowed the contested sales to stand. This particular tract of land was sold to an Israeli businessman and the New Talpiyot Hill company, which together initiated this new plan.

Importantly, Ir Amim notes that there are indications that Israel is carrying out land registration for plots located in the tract of land on which the “East Talpiyot Hill” project would be built. This is highly significant, as the registration appears to be happening in secret and – as revealed by Bimkom’s and Ir Amim’s ongoing monitoring and research, “settlement of land title proceedings are largely being used to dispossess Palestinians of their properties and seize more territory in East Jerusalem for Israeli settlement. “

Haaretz reports that the Israeli Central Command has presented to the Israeli government its plan to expel some X,000 Palestinians from eight villages in Masafer Yatta in the South Hebron Hills – plans it had reportedly  been working on for two months (i.e., even before the new government took power). Sources told Haaretz that the new government has not given the IDF the order to carry out the expulsions yet, but nonetheless the IDF saw fit to design a plan, using vans, to carry out the evictions. Israeli Defense Minister Yoav Galant has reportedly told the IDF that he “needs to study” the matter.

Israel Carries Out Demolitions in Area B

Haaretz has revealed that on November 24, 2022, the Israeli Civil Administration demolished two Palestinian structures in Area B of the West Bank — the area in which, under the Oslo Accords,  Israel enjoys no jurisdiction over civil matters (such as building enforcement). The Civil Administration denies that the demolition violated the Oslo Accords, arguing that it was within its rights because it was acting to address alleged major damage caused to a nearby archaeological site, called Khirbet Tarfin. Israeli political figures were reportedly involved in the decision to carry out the demolitions.

In a statement to Haaretz regarding the demolitions, the Civil Administration stood proudly by its demolition, and committed to defending archaeological sites across the whole West Bank. The statement reads:

“The Civil Administration will continue to expend major efforts and resources in researching and preserving the archaeological sites in Judea and Samaria [the West Bank] in addition to pursuing enforcement activity against antiquities thieves and the building of illegal structures in the heart of archaeological sites.”

The Civil Administration’s statement – and Israel’s move to raze these two Palestinian structures – should be understood against the backdrop of the years-long campaign by settlers pushing the government to unilaterally take control over archaeological sites (defined expansively) throughout the West Bank. In this way settlers and their supporters are- with great success – weaponizing archaeology as a tool for the dispossession of Palestinians.

This effort should also be understood as an expansion of the settlers’ enormously successful tactics in getting the Israeli government to annex Area C – with Israeli policy now treating Area C as sovereign Israeli territory in virtually all ways (other than a public declaration of annexation). Now that the new governing coalition has announced a total freeze on Palestinian construction in Area C and has increased demolition of Palestinian “illegal” construction (i.e., Palestinian construction on their own private land, but lacking Israeli permits, due to the fact that Israel refuses to issue Palestinians permits to build) — and now that Netanyahu has declared Israel’s “exclusive and inalienable right to all parts of the Land of Israel” — it is not surprising, but is still alarming, to see the same land grab tactics that worked so well in Area C applied in Area B. Indeed, more Israeli actions/policies that further the erasure of any meaningful Oslo-era boundaries between West Bank areas should be anticipated.

MK Danny Danon (Likud) – who previously served as Israel’s Ambassador to the UN – has unveiled a bill that would have Israel unilaterally annex the Jordan Valley.

Jordan Valley annexation bills have been introduced into the Knesset for years, but have rarely if ever received real consideration, though support for such a measure is likely high. In September 2019, Netanyahu committed to annexing the Jordan Valley.

The Forum for Young Settlements, an advocacy group by and for settlers, is pushing the new Israeli government to act swiftly to suspend the rule of law to “legalize” settlement outposts across the West Bank that were built in violation of Israeli law, and many of which are located on privately-owned Palestinian land. As part of the coalition agreements, the parties agreed to “legalize” the outposts within the first 60 days of the new government tenure- – but settlers apparently think this is too long, and are demanding that the government act immediately.

The Forum said in a statement:

“[The Forum] congratulate[s] the Prime Minister and the ministers for establishing a stable national right-wing government for the first time in years, and for introducing ‘Young Settlement Regulation’ into the coalition agreements….this is the time to approve the proposal of the decision-makers for regulation. The government’s decision is already prepared, and over 25,000 residents of the young settlements in the winter months cry out for a resolution to their humanitarian needs and immediately enable the connection of all the young settlements to electricity, water, and other infrastructures.”

U.S. Ambassador to Israel Thomas Nides told the Israeli Kan news outlet that the U.S. opposes “massive settlement growth” — seeming to signal the Biden Administration’s acceptance of settlement construction on a less-than-massive scale (FMEP president Lara Friedman notes that this reminds her of an old joke: a couple celebrating their 50th wedding anniversary was asked, what made this marriage last so long? Partner 1 responded – “when we got married, we agreed that I get to make all the big decisions, and my partner gets to make all the small decisions; as it turns out, there has never been a big decision, so peace has reigned between us!”). Nides further said that the U.S. continues to oppose outpost legalization but does not have any “red lines” for the Israeli government.

Peace Now has released an updated map of the West Bank, showing settlements, outposts and more. You can view and download the map here: https://peacenow.org.il/en/%d9%8dsettlements-map-2023

Adalah released a new report on the details contained within the new Israeli coalition deal. The paper examines the following 11 items:

On de facto annexation of the West Bank, Adalah writes:

“These appointments effectively give the RZP control over all settlement construction projects in the West Bank; authority over nearly all issues relating to the settlements: the building of homes, demolition of homes and other buildings, and all other aspects of daily life. This ministerial position will also no longer require the Prime Minister’s approval at various stages of West Bank settlement construction projects; instead, it will only be required once, during the initial stages. Smotrich has made clear that he intends to use this authority to de facto annex the West Bank by, in particular, dismantling the Israeli military’s Civil Administration over the Israeli Jewish settlers illegally residing there and instead putting their governance under Israeli civil domestic law, while continuing to keep Palestinians under military rule. This move will more deeply entrench the two separate systems of governance that already exist based on racial identity, an unquestionable hallmark of a system of apartheid.”