In Public Disagreement Over Future of West Bank, Bennett and Gantz Continue to Play Nice

As has been the case since the inception of the Bennett coalition government, the government’s top figures continue to publicly disagree — to some degree — vis-à-vis the future of the West Bank. This week, Prime Minister Bennett addressed his divergence of views with his Defense Minister Benny Gantz, telling Ynet:

“My perception is different than that of the defense minister although we work in harmony. I oppose a Palestinian state and I think it would be a grave mistake to import the failed Gaza model of Hamas which shoots rockets at us, and turn the entire West Bank to that.”

Meanwhile, in an interview with Foreign Policy magazine, Gantz seemed to suggest his reluctant acceptance to a future Palestinian state (or something that might be called a “state”), saying, “we will need two political entities.” Notably, in that same interview he vowed to never evacuate West Bank settlements.

Haaretz reports that nearly 33% of all new settlers in 2020 immigrated to the West Bank from the United States. A total of 191 Americans moved to the settlements last year alone, a year when the growth rate of the settler population slowed to 2.3% — a rate which is both an all-time low for settlements, but (as in the past) remains higher than the growth rate within Israel itself, which stood at 1.6% in 2020.

Haaretz published a new report on how settlers have enlisted (not unwillingly) the IDF in their attempts to seize control over the Tel Sebastia archaeological site in the Palestinian city of Sebastia. Part of the site (including the entrance, parking lots, and souvenir shops) is on land that is designated as Area B by the Oslo Accords, meaning the IDF should not be operating there. Different settlers groups now consistently – on a twice weekly basis, according to Haaretz – run tours for Israelis to visit the site, for which the IDF provides military escorts. 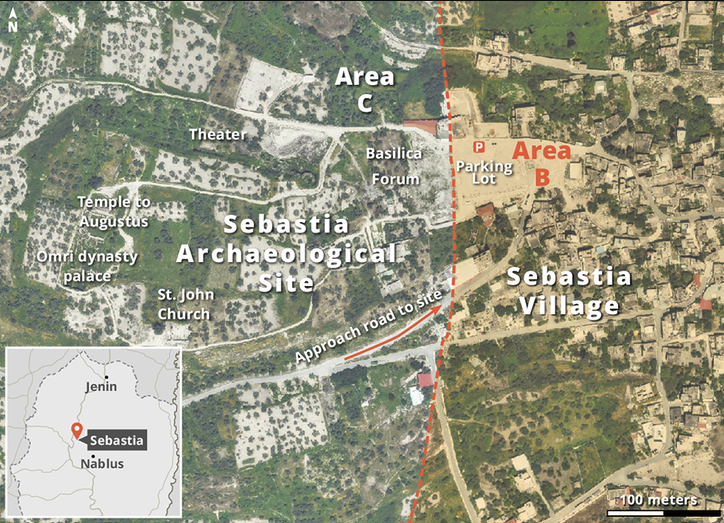 Speaking to Haaretz, one of the settlers who organizes some of the tours, explained to Haaretz:

“The army has an interest in securing and getting to know the area…The army needs to preserve our historical values. It has a role to protect our lives, but also our quality of life.”

“I refer to the settlers’ visits to the site as ‘incursions,’ and everyone who lives in the area suffers. The army will come even during the night, firing stun grenades. It’s all for the settlers.”

Settlers have been openly agitating – with some success – for Israel to assert control over the archaeological site in Sebastia for years. In January 2021, Emek Shaveh (an Israeli NGO expert in – and focused on – archaeology) wrote about what is happening in Sebastia, saying:

“The archaeological site of Sebastia is identified with Samaria, the capital of the Kingdom of ancient Israel in 9-8 BCE. The site also features ruins from the Hellenistic, Roman and later periods. The village of Sebastia is situated within Area B while the site itself is located mainly in area C. Over the past few years, the Samaria Regional Council has been organizing tours to the site, particularly during the school holidays.  Several times this year, the Civil Administration has removed a Palestinian flag from the village and the site. In the most recent incident, a flag was raised following renovation works funded by the Belgian government. In their response the regional council blamed the Palestinians for destroying a site central to Jewish history and UNESCO for supporting the Palestinians. Sebastia is on the tentative list of World Heritage sites in Palestine….the integration of ancient sites into an organized strategy designed to weaken Palestinian hold on Area C is worrying. The formalization of this approach is likely to result in a steep rise in actions over ancient sites and structures, from water cisterns found in many villages, to major sites such as Sebastia. The justification for preserving and developing ancient sites familiar to us from East Jerusalem is now being applied wholesale to hundreds of places in the West Bank to the detriment of the Palestinians living near the sites and to the multilayered heritage inherent in the ruins which will be distorted for political ends.”

As FMEP has chronicled, settlers and their allies are intent upon taking control of archaeological sites and artifacts that are currently under Palestinian control, claiming the sites are neglected and/or damaged. For example, in February 2021 settlers used a construction mishap to raise claims to the Mt. Ebal site.

In January 2021, the state of Israel committed funding to a new settler initiative to surveil archeological sites under Palestinian control. While the objective of protecting antiquities might appear uncontroversial and apolitical, the true (and transparently self-evident) objective behind this effort is to support yet another pretext to surveil and police Palestinians, and yet another means to dispossess them of their properties. It is the result of a campaign that has taken place over the past year in which settlers have escalated their calls for the Israeli government to seize antiquities located in Palestinian communities across the West Bank, especially in Area C, which Israel today treats as functionally (and legally) indistinguishable from sovereign Israeli territory. The controversy that erupted over the Mt. Ebal archaeological site in February 2021 should be understood in this context.

Previous victories for the settlers include the Israeli Civil Administration’s recent issuance of expropriation orders for two archaeological sites located on privately owned Palestinian property northwest of Ramallah. The expropriations – the first of their kind in 35 years – come amidst a new campaign by settlers lobbying the government to take control of such sites, based on the settlers’ claims that antiquities are being stolen and the sites are being mismanaged by Palestinians. The settlers’ pressure is also credited as the impetus behind the government’s clandestine raid of a Palestinian village in July 2020 to seize an ancient font. The Palestinian envoy to UNESCO, Mounir Anastas, recently called on the United Nations to pressure Israel into returning the font to the Palestinian authorities.

In June 2020, a settler group calling itself “Shomrim Al Hanetzach” (“Guardians of Eternity”) began surveying areas in the West Bank that Israel has designated as archeaological sites in order to call in Israeli authorities to demolish Palestinian construction in these areas. The group communicates its findings to the Archaeology Unit of the Israeli Civil Administration (reminder: the Civil Administration is the arm of the Israeli Defense Ministry which since 1967 has functioned as the de facto sovereign over the West Bank). The Archaeology Unit, playing its part, then delivers eviction and demolition orders against Palestinians, claiming that the structures damage antiquities in the area.

As a reminder, in 2017, Israel designated 1,000 new archaeological sites in Area C of the West Bank. The “Guardians of Eternity” group, not coincidentally, is an offshoot of the radical Regavim organization, which among other things works to push Israeli authorities to demolish Palestinian construction (on Palestinians’ own land) that lacks Israeli permits (permits that Israel virtually never grants). The group raised public alarm about the Trump Plan, alleging that hundreds of biblical sites in the West Bank are slated to become Palestinian territory.

In a new report, the Palestinian human rights group Al-Haq documents the intensification of Israel’s policy of compelling the self-demolition of homes by Palestinian owners in Jerusalem. As FMEP has reported in the past, Israel in effect coerces Palestinians into tearing down their own homes in order to avoid exorbitant Israeli fees and other consequences, while facing the same ultimate fate: homelessness in Jerusalem.

Al Haq’s report specifically documents four cases where Palestinians were forced to self-demolish their home between August 16-23, 2021. Al-Haq explains why Israel’s policies that result in coerced self-demolitions are “gross violations of international law, perpetrated under law enforcement considerations for the purpose of executing the forcible transfer of the protected Palestinian population from Jerusalem.”

“House demolitions have been central tools to facilitate Israel’s land appropriation and dispossession. Israeli planning and zoning laws were from the onset designed to prevent Palestinian urban development, through elaborate legal arrangements including lengthy, costly and complex building permit procedures, and several building prohibitions based on land designations as ‘green areas,’ or ‘national parks’ to limit as much as possible Palestinian construction, with the result that only 13 percent of east Jerusalem land is zoned for construction, in already heavily urbanized areas. Demographic pressure and the need for urban expansion, coupled with the Israeli authorities’ denial of 93 percent of overall building permits, Palestinians are forced to build their homes without permits. Between 30 and 50 percent of Palestinian houses in Jerusalem are estimated to have been built without permits, putting some 100,000 individuals in jeopardy. They are subsequently ordered to demolish their homes by the Israeli municipality or the Ministry of Interior, under the tacit complicity of settler organizations. From January 2009 to November 2019, 952 Palestinian houses and structures were demolished in Jerusalem, inducing the forcible displacement of 3058 Palestinians including 1,196 children. Demolitions in Jerusalem represent some 20 percent of overall demolitions carried out in the entire occupied West Bank. Between 1 January 2021 and 24 August 2021, Al-Haq documented 42 homes demolished in Jerusalem, including 30 self-executed demolitions. The self-execution aspect raises home demolitions to another level of Israeli oppression imposed on Palestinians, obliged to carry out the dismantlement of their houses by themselves. Additional 10,000 NIS (about $2,500 USD fines) and up-to-18-months imprisonment are applicable for an individual who refuses to demolish his home by himself, which in fact, amounts to a State coerced demolition.”