In a wild week in Israeli politics, the Blue & White party splintered as Benny Gantz entered into negotiations with  Likud party to form an emergency power-sharing government. As negotiations made significant headway, the issue of Israel’s annexation of West Bank land nearly derailed the deal. At the time of publication, Israeli press is reporting that the parties have come to some kind of an agreement and expect negotiations to be completed soon that finalize a coalition agreement; it remains unclear what if anything has been agreed with respect to annexation..

To recap how we got here, the Likud party – led by the quarantined Netanyahu – demanded that under a coalition agreement the unity government would move to quickly annex at least part of the West Bank.  Likud has reportedly made this point non-negotiable. The Times of Israel reports that Netanyahu is pushing the point by arguing that annexation must be done before U.S. elections in November 2020, at which time the window of opportunity might close if Trump loses. Netanyahu is facing pressure to be absolutist on this point from his “frenemies” in the Yamina party – Naftali Bennett and Ayelet Shaked – who have threatened to advance legislation against Netanyahu for corruption if he reneges on his annexation campaign promise. Yamina leader Shaked further threatened Netanyahu over rumors (which are looking to be accurate) that the Justice Ministry will go to a Blue & White MK, which Shaked warns “will end chances of expressing sovereignty over Judea and Samaria.”

The remnant of the Blue & White party led by Benny Gantz has not agreed to the Likud push for annexation, instead insisting that the first six months of a unity government focus solely on weathering the COVID-19 crisis. Gantz has also reportedly insisted that annexation should then only happen in coordination with the international community,  and not unilaterally with solely U.S. backing, as Likud prefers. This Gantz position has been met with confusion, given that the international community has not been supportive of the Trump plan, and by-and-large opposes Israeli annexation of West Bank land. To make matters even more confusing, Gantz has previously and very publicly welcomed the Trump Plan with open arms.

Reportedly, one possible Gantz-Netayahu “compromise” would be to go ahead with annexation only “if the Trump administration gave its full-throated backing to the move.”  Likud sources have leaked a different version of the deal, suggesting that the parties have agreed to delay annexation, but have agreed the delay will be for less than six months, permitting Gantz to claim victory in keeping the government focused in the immediate term on COVID-19, while enabling annexation to be carried out before U.S. elections. In addition, sources suggest that an agreement along these lines would include a Likud “concession” that will allow Blue & White party members to “vote their conscience” on an annexation proposal in the Knesset (i.e., allowing them an empty gesture of opposition against an initiative that, by joining the coalition, they are responsible for allowing to come to a vote).

In response to the negotiations, Peace Now called on Gantz to oppose annexation and released a statement saying:

“When the settler right talks about applying sovereignty to the territories or swaths of them, they mean a unilateral and dangerous annexation. The role of the government is to maintain Israel’s ability to flourish as a Jewish and democratic state. This can best be done by keeping an open hand for peace, promoting negotiations with the Palestinians, and taking care to keep its relations with its partners in the region and beyond from deteriorating. The so-called “unity government” to be formed soon must commit not to carry out any unilateral annexation measures in the West Bank. Below is a breakdown of reasons why annexation is not in Israel’s national interest.”

Israel’s Response to Coronavirus Looks A Lot like the Implementation of the Trump Plan, Especially in East Jerusalem

Adding to the topics covered in last week’s Settlement Report (cutting off Shufat Refugee Camp, over-policing Issawiya, and settler violence), the Israeli government continues to roll out policies in the name of fighting the spread of COVID-19 that, in actuality, advance Israel’s annexation plans.

Illustrative of the Israel’s overall policies towards East Jerusalem in the time of Coronavirus, Israel allowed the Palestinian Authority (PA) police force to enter the East Jerusalem neighborhood of Kafr Aqab in order to disperse a riot between groups clashing over the installation of a roadblock leading into the neighborhood. The PA is expressly prohibited by Israel from operating in East Jerusalem neighborhoods. This prohibition that has left neighborhoods like Kafr Aqab, which is located within the Israeli-drawn municipal borders of Jerusalem but on the West Bank side of the separation barrier, in a no-man’s land limbo, with Israel shirking its responsibility for the welfare of legal residents of Jerusalem while simultaneously prohibiting the PA from accessing the areas. One Kafr Aqab resident put it succinctly:

“We [Palestinians living in Kafr Aqab] are paying taxes like anyone else in Israel, but in the first real test, the state is disassociating itself from us. From their standpoint, we may as well die.”

Consistent with this long standing policy of neglect, Ir Amim reports that the Israeli government is failing to  provide adequate services to Kafr Aqab at this time of extraordinary urgency and need. In a letter to Jerusalem Mayor Moshe Leon, Ir Amim noted that there is a shortage of medical supplies and disinfectant, that the water supply is insufficient, and that the city provided food baskets for only 300 families, while there are 800 families in need. Ir Amim also reports that there is a growing sanitation crisis as services have been impacted by employee furloughs at a time when trash production has increased due to families being quarantined at home.

Various Israeli plans and proposals for “Greater Jerusalem,” designated areas like Kafr Aqab, the Shufat Refugee Camp, and other neighborhoods beyond the barrier to be excised from the city, with the intent of engineering a stronger Jewish majority in Jerusalem. The Trump Plan adopts Israel’s position on the matter, and assigns the future (conditional) Palestinian state-in-name-only control/responsibility over Kafr Aqab neighborhood. By all appearances, the COVID-19 crisis has provided Israel a pretext to start implementing this reality by permitting the PA to operate openly in Kafr Aqab.

Similarly, Palestinian police have also been openly operating in the Shufat refugee camp – where rumors swirled last week that Israel intends to close the only checkpoint leading into other areas of Jerusalem. Likewise, in the village of al-Walaja, located partially within the Israeli-drawn borders of Jerusalem and partially in the West Bank, residents are reportedly following orders from the PA offices based in Bethlehem. In both cases, Haaretz reports that the PA is acting in these areas to enforce quarantine/lockdown orders to slow the spread of the Coronavirus.

In East Jerusalem neighborhoods that Israel intends to formally annex, with the approval of the Trump Plan, Israeli actions are decidedly the opposite. Rather than allowing the PA to in any way play a role in helping Palestinian residents cope with the COVID-19 threat,  Israel continues clamp down on any hint of PA presence of activity — even arresting a prominent Palestinian Authority figure, Fadi al-Hidmi (the PA Minister for Jerusalem Affairs), at his home on the Mount of Olives on April 3rd, based on allegations that he was conducting activities on behalf of the PA. In addition, on March 31st, Isareli authorities stopped a Palestinian food supply truck in East Jerusalem on the suspicion that the effort was organized by the Palestinian Authority. In fact, the supplies had been donated by Palestinians citizens of Israel for needy families in the  East Jerusalem neighborhood of Sur Baher. 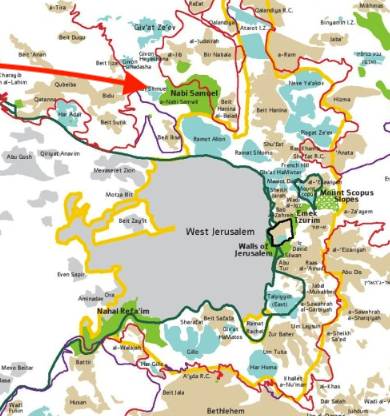 Finally, in what is perhaps the most egregious and inhumane face of Israel’s COVID-19 pro-annexation policies, on March 22nd the Israeli military closed the only entry/exit checkpoint for the Palestinian village of Nabi Samwil. This small village is located on a strategic and highly prized hilltop (inside of a national park) just outside of the municipal borders of Jerusalem but on the Israeli side of the separation barrier — placing residents (who have West Bank ID cards) in a Kafka-esque situation wherein they are cut off from both Jerusalem and the West Bank (legally they are forbidden from taking the one road out of the village into Jerusalem, since they are West Bankers, and the West Bank is accessible only via a circuitous route that passes through an Israeli checkpoint – for background see: The Palestinian village where Israel forbids everything). The military enforced the closure with only 14 hours’ notice for residents. On March 25th, HaMoked submitted an urgent pre-petition to the State Attorney’s Office to re-open the checkpoint, arguing that the village does not have a permanent doctor and only one tiny store for supplies. HaMoked intends to submit another urgent petition to the High Court of Justice. HaMoked stressed that closing the checkpoint denies the village’s residents access to medical care and essential groceries.

The suffocation of Nabi Samwil is in line with Israel’s long-time ambitions to completely de-populate the village and take control of the land.

Settlers Advance Annexation Agenda of Their Own, Including Through Violence

In addition to Israel government actions which advance an annexationist agenda (described above), settler efforts to take over more land have continued during the Coronavirus-based West Bank lockdown. Indeed, the lockdown may be aiding and even fueling these efforts.

In the northern West Bank, for example, settlers are once again terrorizing Palestinians who come anywhere near the site of the former Homesh settlement, which was dismantled by Israel in 2005 as part of the Gaza disengagement. Since then, settlers have been obsessed with the desire to re-establish Homesh, hosting religious events and protests at the site of Homesh, some of which have been attended by Israeli MKs and politicians. Because of the settlers’ actions and the lack of enforcement by Israeli military/police, Palestinians were unable to access the area until as recently as February 2020. Now, while Palestinians’ movement is restricted due to PA-imposed efforts to stop COVID-19, settlers (who, as Israelis, are under far less strict COVID-19 related rules, which in any case the IDF doesn’t appear to be enforcing rigorously on settlers), have re-established a violent presence at the site intended to keep Palestinians away. Over the past month, Palestinians report at least five violent incidents.  On March 26, Yesh Din sent an urgent letter to Israeli authorities documenting the violent incidents and demanding that authorities immediately evacuate the settlers and investigate their crimes.

A key tool settles use to takeover Palestinian land is violence (as documented in great detail in this excellent report by Yesh Din). As the West Bank lockdown continues, settler violence towards Palestinians and their property has predictably continued and even increased, and fear is growing that it will get worse. According to the Israeli Defense Ministry, in data it provided to Haaretz, there were (at least) 16 physical confrontations between settlers and Palestinians in March, compared to only nine in February and five in January. B’Tselem recorded 21 cases of settler violence, including destruction of property, in March alone.

“The quantity and severity of the violent cases we’ve handled in recent weeks is mind boggling. As long as authorities continue to disregard Palestinians’ lives instead of protecting them and arresting the hooligans, the settlers’ violence will only increase and spread.”