Over the last month – which marks the beginning of the annual olive harvest – Israeli settlers have perpetrated numerous violent “price-tag” attacks on Palestinians, their olive groves, and their communities.

On October 16th, Palestinians in the Deir Ammar village woke up to find car tires slashed and hate graffiti spray painted on cars and homes. Later in the day, a group of about 30 masked settlers, apparently from the Yitzhar settlement, attacked a group of Palestinians accompanied by volunteers organized by Rabbis for Human Rights who were picking olives. The settlers uprooted several olive trees, set the grove on fire (Yesh Din estimates that hundreds of acres were burned as a result), and attacked the volunteers, injuring five and beating one volunteer, an Israeli citizen, with an iron rod to the point that he “feared for his life.” A statement from Yitzhar settlement later Wednesday blamed the incident on “provocations caused by extreme-left activists.” One settler from Yitzhar was arrested in connection to the violent assault and arson. The first-person account from the Israel who was beaten, who is himself an observant Jews, is here.

Yitzhar and the surrounding outposts have long been a hotbed of violence against Palestinians – in an important July 2019 report, Yesh Din explained and documented how Yitzhar settlers have used violence to take over more and more land from the surrounding Palestinian villages. The Yitzhar settlement plays host to  the  “Hilltop Youth” settler movement (which has been compared to “a Jewish ISIS”), which bases its operations out of the settlement. This has given the extremist group a perch from which to perpetrate frequent attacks on Palestinians, their property, and their agricultural land (including most notably the 2015 arson/murder in the village of Duma, which killed a Palestinian infant and both parents).

The violence coming from Yitzhar – which is at this point has become a regular trial facing Palestinians – rarely breaks through the Israeli public consciousness, reflecting the Israeli public’s general disinterest (and even hostility) to news about the plight of the Palestinians or activists who work with them.  That changed in recent days, following instances where settlers targeted Israeli soldiers (with video evidence of their deeds).

First, on October 19th, settlers blocked an IDF vehicle from entering Yitzhar, with a settler forcing his way into the vehicle and verbally threatening IDF soldiers inside. Then, on October 20th, a group of 30 settlers staged a riot near Yitzhar, during which the settlers punctured vehicle tires, and threw stones at Israeli soldiers, resulting in the injury of one soldier. The settlers were rioting in response to the arrest of two Hilltop Youth members, one arrested following the October 16 assault, and a second arrested for issuing a threat to an IDF soldier.

In response to the riot, Israeli Prime Minister Netanyahu said: “there will be no tolerance for lawbreakers who raise a hand to our soldiers” — a categorical statement that is contradicted by longstanding Israeli government policy vis-a-vis settler violence.

“This is simply weakness on the part of the state, a lack of desire to deal forcefully with this problem…It stems mainly from the desire to avoid friction with the settlers…The violence is the end result of the whole problem of the hilltop youth. It begins with ignoring the illegal outposts, attacks on Palestinians, attacks on Palestinian property, arson and vandalism. When it relates to Arabs, it’s easier to ignore it. But when soldiers are attacked, it comes up again.”

In response to the violence, the Israeli army increased the number of soldiers stationed in the areas around Yitzhar (note: there is no Israeli police station in Yitzhar; though one is badly needed for security reasons, it is vehemently opposed by Yitzhar’s leaders, who have succeeded in preventing one’s establishment). On October 24th, the Israeli army razed two illegal structures recently built in an unauthorized outpost near Yitzhar, and declared the hilltop area a closed military zone.

Reacting to the demolition of the illegal structures, the Yitzhar settlement released a statement:

“[the] community has expressed its firm stance against harming soldiers, and precisely because of this stance the decision to demolish structures as an act of punishment is wrong and destructive. This move does nothing but inflame the situation instead of calming it.”

Indeed, the increased security presence around Yitzhar has not yet deterred the violent settlers. The morning of October 25th revealed that overnight, Yitzhar settlers had set a newly erected police tent on fire. The IDF had installed the tent on the hilltop where the outpost was located to enforce the closed military zone order. October 25th also revealed that settlers once again invaded a nearby Palestinian village, this time Yatma, to spray paint cars with messages referencing Yitzhar and the IDF’s demolition of outpost structures and closure of the hilltop. 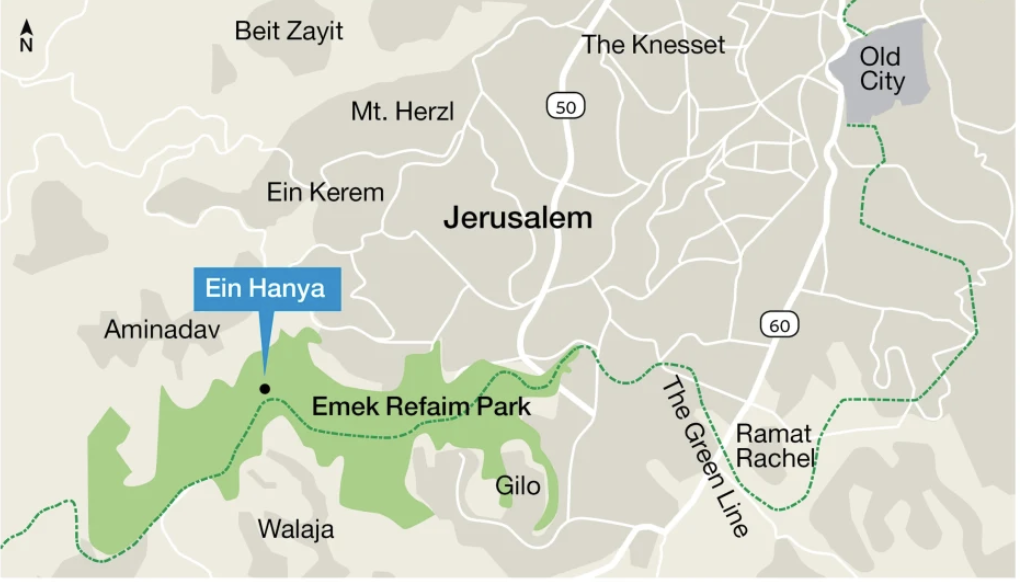 After several delays, on October 15th the Israeli police permitted the Ein Al-Hanya spring to be opened for Israeli visitors on the condition that Palestinians would not be allowed to enter the site. On the first day open, hundreds of Israelis visited the site under the heavy security presence of the Israeli Border Police.

The Ein Al-Hanya spring, which the Jerusalem Municipality first declared a national park and then spent years renovating and millions of dollars into a tourist destination, is located on land historically a part of al-Walajah. Al-Walajah is a Palestinian village that currently finds itself inside of Israel expanded municipal borders of Jerusalem and almost completely surrounded by the Isareli seperation barrier.

“Since we are in the territory of Jerusalem, and building another settler neighborhood could cause a stir, they are building a national park, which will serve the same purpose. The national park will Judaize the area once and for all. Gilo is five minutes away. If you live there, you will have a park right next door and feel like it’s yours.”

“the story of Walaja, where this absurdity took place, contains everything – except humor: the flight from and evacuation of the village in 1948; refugee-hood and the establishment of a new village adjacent to the original one; the bisection of the village between annexed Jerusalem and the occupied territories in 1967; the authorities’ refusal to issue blue Israeli IDs to residents, even though their homes are in Jerusalem; the demolition of many structures built without a permit in a locale that has no master construction plan; the appropriation of much of its land to build the Gilo neighborhood and the Har Gilo settlement; the construction of the separation barrier that turned the village into an enclave enclosed on all sides; the decision to turn villagers’ remaining lands into a national park for the benefit of Gilo’s residents and others in the area”

Since taking the land under the guise of establishing a national park, Israel has implemented several policies aimed at preventing Palestinians from accessing the spring and surrounding lands, including illegally moving a police checkpoint to further choke off al-Walajah from Jerusalem. As detailed in Haaretz, the plan for the park includes three pools filled by the spring – two for Israelis and tourists, and one for al-Walajah residents to water their crops and flocks. However, that third pool for Palestinians has not been built, and the water “merely spills into the nearby wadi.” The other pools, like the park, are currently empty and fenced off.

FMEP has repeatedly documented various Israeli efforts to seal off al-Walajah from Jerusalem. Residents of al-Walajah have fought the growing encroachment by the nearby Etzion settlement bloc and the Israeli government’s attempt to de facto annex the bloc as part of “Greater Jerusalem.” Ir Amim explains several prongs of this effort, including a particularly unbelievable section of Israel’s separation barrier planned to almost completely encircle the village, to turn its valuable agricultural land into an urban park for Jerusalem, and construction of a highway that will connect the Etzion settlement bloc to Jerusalem with Israeli-only bypass roads.

In an interview on October 16th, U.S. Ambassador David Friedman told Arutz Sheva (a pro-settlement media outlet headquartered in the Ariel settlement) that the U.S. peace plan will not require a single settler to leave his/her home. Friedman said:

“Having seen the experience of the evacuation of Gaza [in the summer of 2005], I don’t believe that there is a realistic plan that can be implemented that would require anyone — Jew or Arab — to be forced to leave their home. We think that’s just a recipe for disaster. It almost caused a civil war on much less aggressive circumstances in Gaza, compared to Judea and Samaria [the West Bank]. And so we are not of the view that any forced evacuations are achievable.”

Friedman’s remarks only reiterate what the Trump policy – as it has been implemented on the ground from day 1 of the administration – has looked like: a full-throated endorsement of the Greater Israel ambitions of ideological settlers.