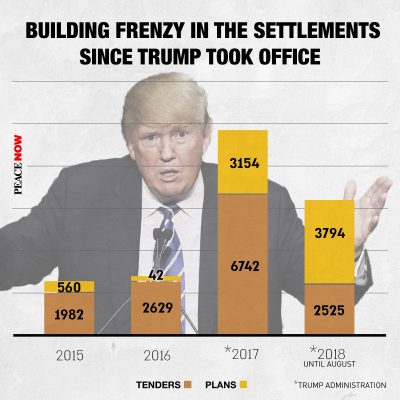 Recently released data from the Israeli Central Bureau of Statistics show that since January 2018, construction has started on a total of 1,073 new settlement units, and total of 1,075 new settlement units (started in previous years) have been completed  – representing new housing for more than 10,000 settlers (assuming, conservatively, a family size of 5-6 people). Together the numbers mark a 66% increase over the same period in 2017. Though settlement plans have advanced at an alarming rate since the beginning of the Trump Administration, actual on-the-ground construction starts did not seen a significant surge until the second quarter of 2018, which saw a 187% increase over the first quarter.

“The Netanyahu government continues to destroy the chances for peace. Further construction in the settlements undermines Israel’s interest in reaching a two-state solution, as such a solution will not be stable without a viable Palestinian state, which settlements increasingly threaten. Unfortunately, since Trump’s election, we have seen a sharp increase in the approval of the plans and tenders, and now we are beginning to see the consequences of these approvals on the ground.”

Settler leaders were characteristically dissatisfied with the pace of construction. The Director of the Yesha Council (and umbrella group representing all Israeli settlements), Yigal Dilmoni, told the Jerusalem Post:

“We are talking about a few hundreds units, which is very little, relative to thousands built throughout the country. Judea and Samaria still have the low building numbers, we expect and hope that we will be given more building permits.”

Ir Amim reports that two plans for new settlement buildings in the Palestinian East Jerusalem neighborhood of Sheikh Jarrah have been deposited for public review. If implemented, the two plans would build two new 6-story buildings in the Um Harun section of Sheikh Jarrah, one with 3 settlement units and the second with 10 settlement units. If implemented the plans will also involve the demolition of two buildings and the eviction of five Palestinian families living there.

The plans were originally approved for deposit in July 2017. As Ir Amim reported in detail at the time, both plans (numbers 14151 & 14029) are linked directly to Jerusalem settlement impresario Aryeh King. King can now count several significant victories for his settlement projects in sensitive Jerusalem neighborhoods over the past two weeks, totalling 309 new settlement units: Two plans were advanced in Sheikh Jarrah, totalling 14 units; one plan was advanced in Beit Hanina, totalling 75 units; also this week, King reportedly announced (though details are scant – stay tuned) that the government has approved a plan for 220 new units in the Nof Zion settlement enclave, located inside the Jabal al-Mukaber neighborhood. It is worth noting that, back in September 2017, the government was poised to issue permits for 176 units in Nof Zion – it is not clear if the 220 include those units, or are in addition to them, or if the numbers are inaccurate or deliberately misleading.

Settlement advancements in Sheikh Jarrah are becoming alarmingly routine. In addition to the developments this week, the inflammatory plan to build a Jewish religious school (known as the Glassman yeshiva project) was recommended for final approval. If implemented, an eight story building will be erected at the entrance to the Sheikh Jarrah neighborhood. The massive building will also include dormitories for young religious men and eight units to house “lecturers visiting from abroad.”

The Land Research Center, a Palestinian organization, reports that the Israeli Civil Administration – the arm of the Israeli Defense Ministry that runs all affairs in the West Bank – has published a detailed plan to expand the borders of the Tene-Omarim settlement to include an outpost that was built without Israeli government authorization, located on lands claimed by the Palestinian village of Dahriyeh.

In order to carry out the plan, the Israeli Civil Administration will add 260,000 square meters of land (roughly 64 acres) to the settlement. The plan calls for 150 new units in Tene-Omarim in addition to new roads and open areas to connect the settlement to an outpost northeast of its borders.

In May 2018, the Israeli Civil Administration advanced plans for 143 new settlement units in Tene-Omarim.

On August 24th, the Israeli NGO Emek Shaveh reported that the Jerusalem Municipality had  issued “gardening orders” as a means of taking over new areas of privately owned land in the Silwan and Abu-Tor neighborhoods of East Jerusalem (in the area known in Hebrew as the Ben Hinnom Valley). Under Israeli law, the Jerusalem municipality can issue orders to use private land for public purposes if it deems the land “unutilized” by its owners. News of the orders broke the day before U.S. National Security Advisor John Bolton attended a dinner party in Silwan hosted by the radical settler group Elad.

The orders seize 27 plots of land owned by Palestinians, based on the argument that the plots are not being used by their owners. The orders disingenuously note that Palestinian owners can seek to reclaim their land in the event that they obtain Israeli-issued building permits (without which they are unable to utilize the land for their own purposes). This explanation, as Emek Shaveh notes, ignores the fact that “the land owners cannot receive construction permits because their land is situated within a national park which, according to law, precludes construction.”

Emek Shaveh goes on to report:

“The gardening orders are the latest in a series of development activities in the Ben Hinnom Valley/Silwan area and will no doubt complement the Elad Foundation’s initiatives in the valley and efforts to link it with tourism ventures in the City of David/Wadi Hilweh. The Elad Foundation together with government ministries are currently promoting several projects within the area covered by the gardening order including a café in Abu Tor, the planned cable car intended to link West Jerusalem to the Kedem Center, and the archaeological excavations which the Elad Foundation has been funding in recent years adjacent to the Catholic cemetery.”

Minister Levin boasted of having directed USD 11.15 million (NIS 40 million) to West Bank tourism projects over the past three years of his tenure.

In addition to his work directing taxpayer funds to the settlements, Minister Levin has also been pushing legislation and procedural rules that advance the direct application of Israeli laws over the settlements (an act of de facto annexation).

On September 17th, the Knesset held a special session (during the Knesset recess) titled, “Justice Minister Ayelet Shaked’s attack on the High Court of Justice and the danger to democracy.” As FMEP has extensively documented, Justice Minister Shaked has been hard at work transforming the Israeli judicial branch in favor of pro-settlement and pro-annexation policies.

Meretz Chairwoman MK Tamar Zandberg opened the the special session defending her own party against accusations of political interference with the Court (Shaked denies a quote attributed to her saying that the High Court is an “arm of the Meretz party”). Zandberg said:

One of many speakers, MK Michal Rozin (Meretz) said:

“Ayelet Shaked’s commander’s spirit is felt in the justice system – from the deepening of her control in the Judicial Appointments Committee, which has become a committee for the appointment of conservatives, to rulings which adopt her anti-constitutional lines, such as allowing the theft of Palestinian lands by the Jerusalem District Court. This spirit is aimed at applying sovereignty in the conquered territories, reducing the freedom of the citizens and expanding the Orthodox control on our daily lives.”

Appearing at the hearing under summons on behalf of the government, Justice Minister Shaked told her critics in the Knesset:

“I understand your anger about the fact that Jews are not being evacuated from their homes, but you must pull yourself together. We have a country to protect. The rule of law must be preserved. We cannot accept a situation in which your criticism of the court is sinking to such depths to which you have recently deteriorated. As the Minister of Justice, I call upon those who sit in this House – on the Left and the Right – to maintain dignified discourse. We don’t have another legal system. Of course it is legitimate to express criticism against a ruling. It is acceptable to argue over ideas, it is permissible to argue over areas of authority. I do so from time to time, but we must maintain respectability and dignified discourse.”