Reportedly at the Trump Administration’s request, PM Netanyahu has put a two-week delay on a highly consequential meeting of the Civil Administration’s Planning Committee, which was set to consider advancing plans for the construction of as many as 2,000 new settlement units. The meeting had already been delayed at least once, out of concern for international blowback around the United Nations General Assembly confab last week. The delay comes as President Trump’s special envoy, Jason Greenblatt, arrives in the region to continue talks ostensibly aimed at restarting peace negotiations.

The decision angered Israel settlers and their allies, many of whom are already frustrated by Netanyahu’s failure to fulfill his promise to market tenders (a final step in the planning process) for 300 new units in the Beit El settlement earlier this month. Once the tenders are marketed, there will be a 60-day bidding period, after which the tenders will be awarded. Beit El is the settlement for which U.S. Ambassador David Friedman served as a longtime fundraiser, until his diplomatic appointment earlier this year. The settlement is deep in the West Bank, near Ramallah.

On September 25th, Israel’s High Court of Justice heard arguments [CORRECTED: The hearing scheduled for September 25th was delayed, and a new date for the hearing before the High Court has not yet been set. Read on for information about the State’s response to the petitions, submitted to the High Court this week.]  on two competing petitions regarding the future of the residents of the Palestinian village of Khan al-Ahmar. One petition, submitted by settlers living near Khan al-Ahmar, seeks to expedite the demolition of the village school. Another petition, submitted by Khan al-Ahmar’s residents (Palestinian Bedouins), seeks to delay the demolition of the village’s structures, all of which have been issued demolition orders. We covered the background of the community – and Israel’s plan to forcibly relocate its residents [a war crime] to a site near a garbage dump, in order to expand the Maale Adumim settlement – in last week’s Settlement Report, which you can read here.

The Israeli government submitted its response to the petitions on Monday, saying it intends to carry out the demolition of the village and the relocation of its residents by mid-2018. The State asked the High Court to reject both petitions and allow the plan to advance. B’Tselem’s Executive Director Hagai El-Ad issued a blistering response to the State’s argument saying:

No sanctimonious language about a ‘planning, proprietary and realistic’ alternate, or ‘time to prepare’ can erase the disgrace or hide the facts: the destruction of Khan al-Ahmar means the forcible transfer of protected persons, and forcible transfer is a war crime. Those responsible for it will bear personal criminal liability – exactly as B’Tselem stated two weeks ago, in a letter addressed to the prime minister, defense minister, justice minister, chief of staff and the head of the Civil Administration.

Peace Now also issued a statement on the State’s response:

While the government argues that the residents of Khan al-Ahmar will received alternative housing, they will in fact be evacuated against their will for the benefit of settlers, and placed above the garbage dump in Abu Dis. This type of forceful evacuation of protected persons constitutes a severe violation of international humanitarian law.

It appears that the forceful displacement of the residents of Khan al-Ahmar is a form of “compensation” for his right wing supporters for the upcoming evacuation of the Illegal outpost of Derech Ha’Avot, following a High Court ruling.

It is shameful that settlers from Kfar Adumim, who received their lands for free from the government, are fighting for the evacuation of their Palestinian neighbors, who resided in the area long before them.

Ahead of the hearing, the Haaretz editorial board penned a plea to the Court against the forced relocation and replacement of West Bank Bedouin with Jewish settlements, stating:

This political project – the forced uprooting of Bedouin communities, replacing them with new Jewish settlements – is against international law. It has reached the doorstep of the High Court justices, who are under constant pressure to “respect the will of the people” – that is, the will of the settlers who control the government – even though this will is neither legal nor moral. It must be hoped the justices will be able to stand in the breach. The Israeli Defense Ministry is “no longer willing to postpone” the demolition of the Palestinian community of Susiya, according to Haaretz reporting. A senior security official told Haaretz that the demolition will happen within a few months.

Like the Khan al-Ahmar community, the Palestinian residents of Susiya in the South Hebron Hills are the target of Israeli demolition orders and relocation plans. The community that makes up Susiya has a long history, as reported by Haaretz:

Susiya has long been a symbol of both Palestinian steadfastness and Israeli policies. In 1986, Israel expelled the residents from their original ancient village, whose lands were declared a national park. In 2001, they were thrown off their agricultural lands, where they had settled after the earlier expulsion. The High Court of Justice allowed them to return, but didn’t order the authorities to allow them to rebuild. As a result, all the structures in the village were built without permits and are at risk of demolition. The Civil Administration never prepared a master plan for Susiya and rejected the plan the residents had submitted, demanding instead that the residents move to an area near the city of Yatta. The residents refused, but agreed to meet with Civil Administration officials to try to come to some understanding.

The plight of Susiya’s residents continues to inspire a vibrant civil society campaign in both the U.S. and in Israel. Notably, the Obama Administration intervened in the case of Susiya as recently as last year. Back in November 2016, Senator Dianne Feinstein (D-CA) a statement praising PM Netanyahu’s decision to delay the demolition (the link includes links to Feinstein’s long engagement on this issue). In 2015, 10 members of the U.S. House of Representatives sent a letter to Secretary of State John Kerry raising the village’s plight. The New York Times, the Washington Post, and CNN are a few major U.S. outlets that have featured the Susiya’s story sympathetically.

Israeli Military Sets Up New Guard Post in Area A

Peace Now this week published a report documenting the fact that the Israeli army recently established a new guard post in the West Hebron Hills, in a part of the West Bank that is designated as “Area A.” Under the 1995 Interim Agreement, the Palestinian Authority has full civil and security control in the 18% of the West Bank designated as “Area A.” Israeli forces are not allowed to operate in – or even enter – Area A; however, for years Israel has insisted on its right to “hot pursuit” in Area A, carrying out operations at it pleases. 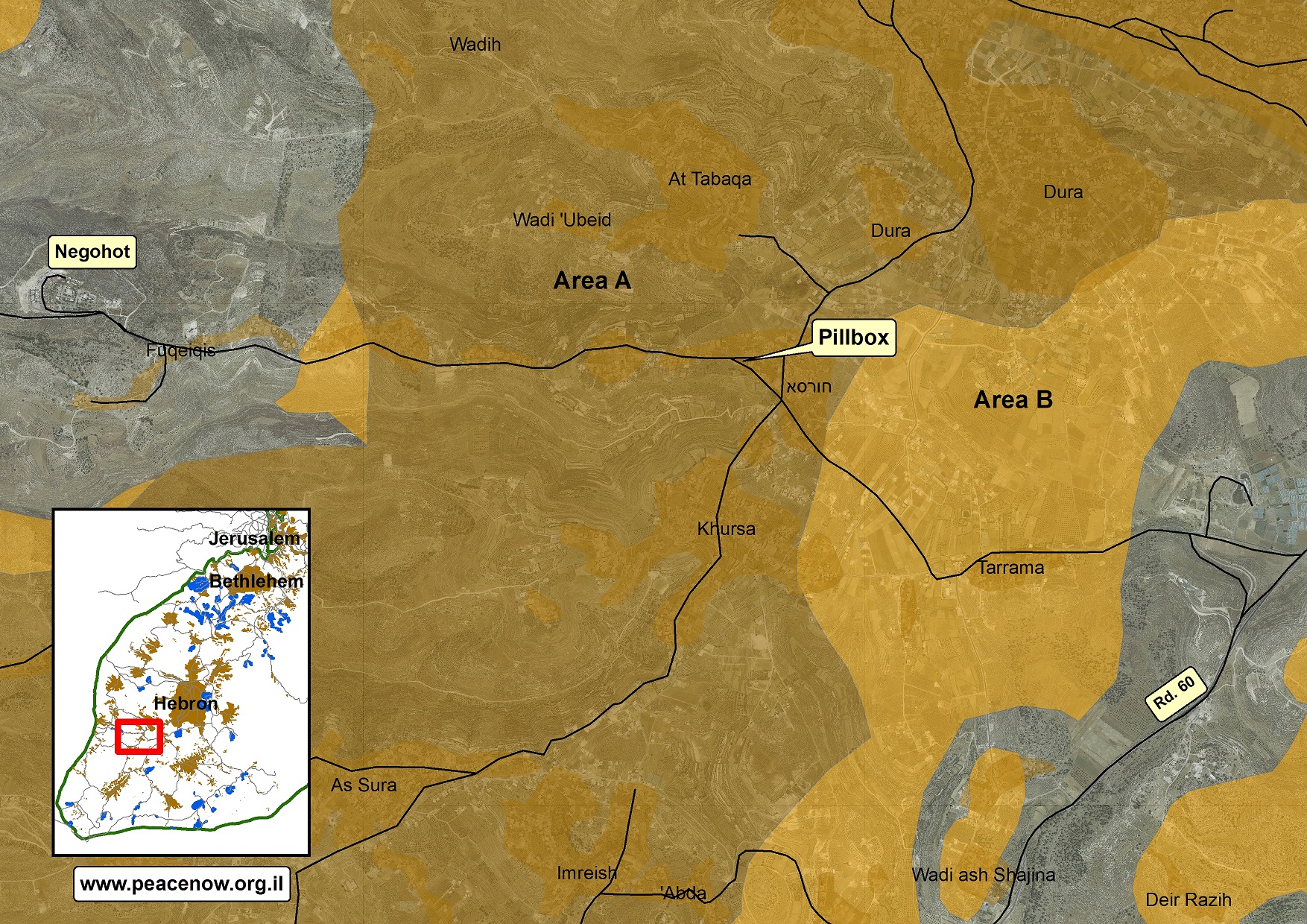 The establishment by the IDF of a static post in Area A (dispensing with even the pretense that the operation is related to “hot pursuit”) represents a new and significant escalation in Israel’s violation of the 1995 Interim Agreement. According to Peace Now, the new “pill box” guard post was built “in the heart of the Palestinian village of Khursa in the West Hebron Hills….in order to protect vehicles of the Negohot settlers, who drive through Area A in order to shorten the way between Jerusalem and the South Hebron Hills.” The Negohot settlement was established in 1999 without official Israeli authorization. A jurisdiction was approved to retroactively legalize the settlement in 2013.

The placing of a guard post in area A is a blatant violation of the Oslo Accords and shows the length the Israeli government is willing to go in order to help a handful of settlers take a shortcut on their way home. The new IDF guard post illustrates, yet again, that the settlements do not contribute to Israel’s security, but rather pose a national security burden.

This week the Israeli Knesset submitted to the Israeli High Court of Justice its response to petitions challenging the constitutionality of the “Regulation Law,” which was passed by the Knesset in February 2017. The law provides a legal basis to retroactively legalize Israeli outposts, settlement structures, and agricultural lands that were built illegally (i.e., without permission and/or on land recognized by Israel as privately owned by Palestinians).

The Knesset’s legal advisor argued that Israel is able to selectively write laws for the West Bank. The Knesset asserts it must do so in this case because no other means exist to legalize the settlement homes and outposts [Note: no other means exist because, according to rule of law, the law applies, regardless of whether politicians like the results].The Knesset’s response asks the Court to reject petitions against the Regulation Law.

Last month, a private lawyer hired by the government submitted the State’s response to the petitions, after the Israeli Attorney General declared the law illegal and refused to defend it. The State’s response claimed that the law is legal because Israel can legislate in the West Bank and because the law provides an avenue to compensate the dispossessed Palestinian landowners.

Peace Now and Yesh Din are among the 13 civil society groups leading a legal challenge to the law on behalf of Palestinians. According to data collected by Peace Now, the law will lead to the expropriation of over 8,000 dunam (nearly 2,000 acres) of private land upon which structures have been built illegally – and tens of thousands of dunams of land on which agricultural crops have been planted. The land designated for expropriation is owned by thousands of Palestinians, among them many of the residents of the villages represented in the petition.

On September 26,, a Palestinian man opened fire at the gate of the Har Adar settlement, near Jerusalem. He killed three Israelis – two civilian security guards (one of them a Palestinian citizen of Israel)and one border policeman – and injured another guard. The assailant, who was killed at the scene, was identified as 37-year-old Nimer Mahmoud Ahmad Jamal from the neighboring Palestinian village Beit Surik. He reportedly had an Israeli-issued work permit (which requires security screenings) to enter the settlement, where he was employed as a cleaner. Jamal reportedly had no security record and was married with four children (meaning he did not fit any profile for someone who might commit such an attack). He was reportedly having serious personal and family problems.

Shortly after the attack, Prime Minister Netanyahu announced a range of Israelis responses targeting not the assailant (who died in the attack) but his family, his immediate community, and potentially Palestinians beyond that: the assailant’s house will be demolished and any work permits issued to his relatives (extended family) will be revoked. The attacker’s hometown, Beit Surik, was sealed-off by the Israeli army, and his brothers was arrested. Additional Israeli troops were sent into the area around Har Adar, which sits in what Israel calls the “seam zone,” i.e., the area of the West Bank that runs along, and sometimes on the  Israeli side of, the separation barrier. Netanyahu also blamed President Abbas and Palestinian official “incitement” for the attack, despite Israel media reporting widely on the personal problems of the attacker.

FMEP President Lara Friedman has written about how Israel’s response to terror, many elements of which have already unfolded around this attack, amounts to collective punishment.