The Israeli Civil Administration announced that construction will begin next week on a new section of Route 4370, aka, the Apartheid Road (having earned the nickname for the high cement wall running down the middle of the road, separating Israeli and Palestinian traffic). The work will expand the road to the south in order to connect to East Jerusalem. The new road, which Israel touts as a benefit for Palestinians, is designed to route Palestinian traffic around the E-1 settlement area – in preparation for that settlement’s eventual construction. According to Ir Amim, the construction of this new road segment “constitutes a major step in laying the groundwork for settlement building in the E1 area.” 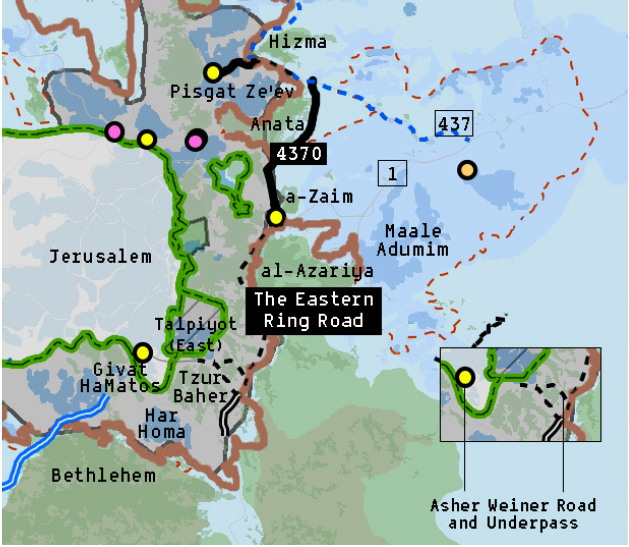 Map by Breaking the Silence

“While portrayed as a road project to benefit Palestinians by expediting traffic and significantly reducing travel time between Ramallah and Bethlehem, it will in fact serve to completely reroute Palestinian traffic out of E1. Currently, the only road which facilitates Palestinian travel between the two West Bank centers runs through the E1 area. This limits Israel’s ability to carry out its massive settlement plans in the vicinity, which would require blocking Palestinian access to the area. This new road along with Route 4370 will create an alternative corridor between Ramallah and Bethlehem, which would eliminate the need for Palestinians to drive through E1 altogether. Diverting Palestinian traffic thus removes one of the obstacles to settlement construction in E1 and should signal cause for heightened vigilance.”

In a 2008 objection against the construction of the Apartheid Road, Adalah explained:

“The road further aims to consolidate and develop the Jewish settlements in East Jerusalem and the West Bank, and link them directly and conveniently to each other and to West Jerusalem. The road is simultaneously intended to isolate the Arab neighborhoods in East Jerusalem from the main route of the Eastern Ring Road, from each other and from the West Bank. It would thereby turn these neighborhoods into islands that are isolated – geographically, economically and in terms of transportation – from their immediate surroundings and would end Palestinian geographical contiguity within and around East Jerusalem, thereby precluding any future economic and social development or expansion of these neighborhoods. The plan stands to cut the owners of agricultural land off from their lands, to dramatically reduce the accessibility of schools, health services and workplaces for residents of these neighborhoods, and severely disrupt their family and social lives.”

Israeli officials have argued that the now-open road should resolve international objections to Israel building the E-1 settlement (a plan long criticized for effectively cutting the West Bank in half, rendering any future Palestinian state discontiguous and non-viable). In Israel’s view, the road replaces territorial contiguity for Palestinians in the West Bank with “transportational continuity,” i.e., the West Bank would still be cut in half, but the two halves are now inked by a road (albeit it a road that cuts Palestinians off from Jerusalem and that leaves travel between the northern and southern West Bank subject to Israeli control).

Ir Amim reports that on March 23, the Israeli Nature & Parks Authority would be opening an Israeli national park in the area around the Ein Haniya spring. The spring is a historical part of the al-Walaja village, a Palestinian village located on the southern flank of Jerusalem, and long served as a main sources of water for households, farms, and recreational purposes for the village’s residents. Al-Walaja has long suffered due to its location and its complicated status (much of the village’s lands, including areas with homes, were annexed by Israel in 1967, but Israel never gave the villagers Jerusalem legal residency by Israel – meaning that under Israeli law, their mere presence in their homes is illegal). Today it is acutely suffering from a multi-prong effort by the Israeli government and settlers to grab more land for settlement expansion in pursuit of the “Greater Jerusalem” agenda. This land grab campaign includes past and pending home demolitions, the construction of the separation barrier and bypass roads in a way that seals off the village on three sides, and the denial of planning permits.

The history of this spring is just one example of how the Israeli government pursues land grabs with the facade of legality. As explained by Ir Amim:

“In 2013, in tandem with the construction of the barrier on al Walajeh lands, the Jerusalem District Committee approved an outline plan which designated the 1200 dunams of land as the Nahal Refaim national park in complete disregard of private Palestinian land ownership and traditional Palestinian agriculture in the area.

As a means of completely sealing off these lands from Palestinian access, including from village residents, the Jerusalem municipality began relocating the checkpoint between Jerusalem and al-Walajeh to a location closer to the village in February 2018. Construction on its relocation was suspended in March of the same year due to budgetary reasons and as a result, the Israeli authorities decided to keep the Ein Haniya site closed until the relocation is complete. Upon inquiry, however, Ir Amim was informed today that the plans for the checkpoint’s relocation have been terminated, and that Palestinian access to the area will remain unobstructed “unless security forces decide otherwise.”

Keeping the area open to Palestinian access is a significant achievement, which in no small part is due to al-Walajeh farmers’ perseverance despite the many obstacles and threats they continually face. In spite of this, the INPA’s plans include a variety of projects aimed at transforming al Walajeh’s agricultural terraces into an Israeli touristic and recreational destination, replete with hiking trails and outdoor activities, which creates the illusion of an entirely Israeli space.

The national park extends to the Jerusalem municipal border in close proximity to the area where Israel intends to establish a new settlement on al Walajeh’s lands (Har Gilo West) in the West Bank. In addition to creating contiguity between Jerusalem and the Gush Etzion settlement bloc around Bethlehem, the national park further isolates al Walajeh, turning it into an enclave detached from its Palestinian surroundings. In doing so, Israel advances its entrenchment of control along the southern perimeter, while undermining any prospect of a negotiated agreement in Jerusalem.”

Ir Amim reports that Palestinians have filed an appeal to stop the demolition of 70 homes in the Al-Bustan section of the Silwan neighborhood in East Jerusalem. The Palestinians’ appeal responds to a surprising move by the Jerusalem Municipality, made in late February, to request permission from the Court to demolish the homes – demolition which had been frozen by the Courts since 2010 to allow for a negotiated resolution to the situation. For more on the history of this situation, see FMEP’s report from last week.

Additionally,  Ir Amim has published a new, and more detailed, explainer on this case – highlighting the political context in which the Jerusalem Municipality made this decision. Ir Amim writes:

“The municipality’s plan called for the establishment of a touristic and archeological park (Plan 18000: “the King’s Garden”) replete with residential and commercial areas, including hotel space. This planned park would extend the existing national park in the City of David (the hub of Elad’s settler operations) southwards spanning the entire neighborhood of Al Bustan and towards the settler enclave in central Silwan (Batan al-Hawa) where the Ateret Cohanim settler organization is active. Since 2010, the plan has not advanced likely due to local and international opposition. However, the municipality’s objection to extension of the freeze signifies its intent to reactivate the plan, consistent with the acceleration of similar Israeli measures over the past year after being emboldened by the Trump Administration…

Beyond the severe humanitarian toll lie the acute demographic and political implications. The “King’s Garden” plan is yet another measure to transform the area into a sprawling Israeli tourist site, while further erasing its Palestinian presence.  Silwan is one of the focal points of state-backed ideological settler activity. Settler groups threaten to displace over 800 Palestinians with the goal of establishing settler strongholds in the heart of Palestinian neighborhoods as a means to dismantle the viability of a political resolution on the city. Touristic settlement initiatives serve to reinforce residential settlement by connecting otherwise isolated settler compounds to create a contiguous ring of Israeli control (see map below for illustration), while artificially increasing the Israeli Jewish presence in the area via Israeli tourists visiting the sites. If advanced, the “King’s Garden” would essentially constitute a seamless extension of the City of David’s touristic attractions, further eroding the character of the neighborhood and its fabric of life, while leading to the forcible transfer of nearly an entire community.”