Al-Walajah is One Month Away From Potential Mass Displacement

Ir Amim and Bimkom report that on March 8th the Jerusalem District Planning Committee rejected the most recent proposal for an outline plan for the Palestinian village of Al-Walajah – leaving 38 houses at risk of demolition next month (April 2021). 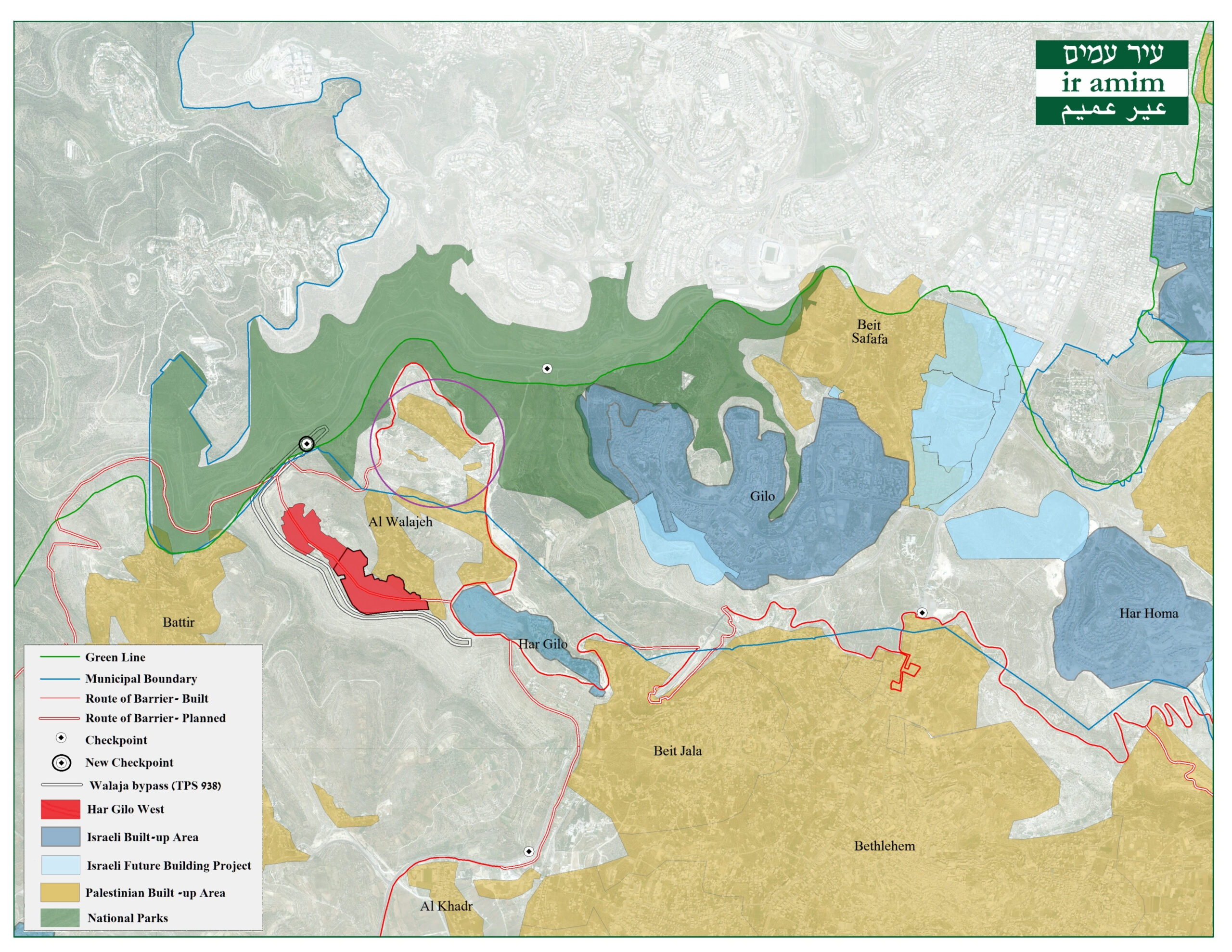 The homes facing demolition are in the northern section of the village, where they were built by Palestinians (on their own private land) without the necessary permits from the Israeli government. Setting aside the fact that Israel rarely issues permits for Palestinians to build, these villagers have zero hope of obtaining the necessary permits given the fact that the Israeli government has refused to approve an official outline plan for the area – and without an outline plan, permits cannot be issued.

In an effort to overcome this obstacle, Palestinians, with the help of planning experts, initiated their own outline plan for this section of Al-Walajah in the hopes of getting it approved by Israeli authorities — to no avail. Israeli authorities have repeatedly refused to approve the resident-backed plan, and have also refrained from initiating their own planning process. The result: Al-Walajah’s residents were left in limbo – that is, until the Jerusalem District Committee, as part of a January 25, 2021 ruling against an outline plan proposed by residents, deemed the area in question — where Palestinians have lived for decades — an “agricultural area” where no building would ever be permitted.

Explaining why that ruling is significant, Ir Amim and Bimkom writes:

“The designation of areas as national parks, nature reserves, and/or green spaces is a common practice of Israeli authorities in East Jerusalem to suppress Palestinian planning and residential development while allowing for the seizure of their lands to serve Israeli interests. Although the planning committee dismissed the village’s outline plan for the purpose of ostensibly promoting nature conservation, plans for Israeli settlement construction in the same area on lands confiscated from al-Walajeh have all been advanced. This includes expansion of the Gilo neighborhood/settlement (to the east of the village), the al-Walajeh Bypass Road and the new settlement of Har Gilo West (see more below). Not only does this reveal the baseless nature of the committee’s claims concerning environmental considerations, but also underscores the rampant planning and housing discrimination leveled against Palestinians in Jerusalem. Likewise, the committee’s citation that the area’s traditional and historical agricultural assets must be preserved explicitly overlooks the village’s essential role in this centuries-old preservation. Continued cultivation of the land and conservation of the surrounding landscape is inextricably tied to the existence of the village and the close proximity of their homes to their agricultural lands.”

It’s also worth re-reading the brief synopsis of the saga provided in the report to understand the story of the 38 homes under present threat of demolition in the context of Israel’s decades-long campaign to make life in Al-Walajah untenable:

“After being uprooted from its lands on the Israeli side of the Green Line in 1948, al-Walajeh was rebuilt on village lands which remained on the West Bank side of the Green Line. In 1967, the northern section of the village was annexed to Israel and absorbed into Jerusalem. Today, this part of the village is a small community of roughly 150 homes, which were mostly built after 1967 and considered illegal by the Israeli authorities due to the impossibility of procuring building permits. Over the years, dozens of homes have been razed in the annexed part of the village. Since 2016, there has been a significant rise in the number of home demolitions in this area of al-Walajeh as a result of increased enforcement and penalization of building offenses in Palestinian residential areas in Jerusalem. More than 20 houses have been demolished in the past five years. While 38 homes currently face pending demolition orders, many others are at risk of receiving them, subjecting nearly the entire community to the threat of widespread demolition and displacement.“

On March 8th, the settler group Regavim filed a petition with the Jerusalem District Court seeking data that could shed light on the number of Palestinian homes in Area C of the West Bank that are connected to an Israeli power company (the East Jerusalem Electric Company). The Civil Administration has already rebuffed Regavim’s freedom of information request for the data, so Regavim has turned to the Court to force the issue.

Regavim reportedly wants to know how the East Jerusalem Electric Company received permission to connect to several Palestinian homes near the Efrat settlement, and whether there is an approved electricity plan that includes the Palestinian homes (which Regavim asserts were built illegally – i.e., without the almost impossible-to-obtain Israeli building permissions). A senior Regavim staffer made clear to Jewish Press that this initiative is about promoting total Israeli control over Area C.

This latest legal initiative from Regavim should be understood as part of the ongoing campaign — by settlers and the Israeli government — to entrench and expand Israel’s control over (and de facto annexation of) the entirety of Area C, which represents around 60% of the West Bank. Notably, in September 2020 the Israeli government allocated 20 million NIS ($6 million USD) for the newly created Settlement Affairs Ministry to survey and map unauthorized (by Israel) Palestinian construction in Area C (which Israel has been aggressively demolishing). This funding further empowers a domestic Israeli body to exert extraterritorial sovereignty over Area C – in effect, treating the area as land already annexed by Israel.

The Knesset has also repeatedly hosted forums to discuss the alleged (by settlers and their allies/advocates) “Palestinian takeover of Area C.” Consistent with this framing (which is predicated on the idea that Area C belongs to Israel and must be defended against Palestinian efforts to steal it), and pushed by outside groups, many members of the Knesset have criticized the Israeli government’s alleged failure  to robustly “defend” Israel’s rights/ interests in Area C (e.g., preventing “illegal” Palestinian construction, preventing foreign projects that support Palestinians’ presence in the area, clearing out Palestinians, expanding settlements, consolidating state-built settlement infrastructure).

New Report: “This Is Ours – And This, Too : Israel’s Settlement Policy in the West Bank”

Two venerable Israeli NGOs – B’Tselem and Kerem Navot –  released a new report entitled “This Is Ours – And This, Too : Israel’s Settlement Policy in the West Bank.” The report covers two main areas of interest:

The report, which readers are encouraged to read in the context of B’Tselem’s recent position paper on Apartheid – concludes:

“While de-jure annexation of the West Bank may have been shelved, this is immaterial in practice – as the report demonstrates yet again. Construction and infrastructure work has recently been carried out in the West Bank on a scale not seen in decades. This large-scale development is designed to facilitate another significant spike in the number of settlers living in the West Bank, which settlement leaders predict will reach one million in the near future. This massive investment further entrenches Israel’s hold on the West Bank, clearly demonstrating the regime’s long-term plans. These include cementing the position of millions of Palestinians as subjects denied rights and protection, who are deprived of any ability to influence their own future and forced to live in disconnected, dwindling, economically suppressed enclaves. They are forced to look on as they are dispossessed of more and more land, while communities and infrastructure are built for Jewish citizens. Two decades into the 21st century, Israel appears more determined than ever to continue upholding and perpetuating an apartheid regime throughout the area under its control, well into the coming decades.”