Yesh Din Declares: Israel is Committing the Crime of Apartheid in the West Bank

In a first for Israeli human rights groups, Yesh Din published a legal analysis, written by renowned Israeli human rights lawyer Michael Sfard, that concludes that Israel is committing the crime of apartheid in the West Bank, as defined by the International Convention on the Suppression and Punishment of the Crime of Apartheid  AND the Rome Statute. The legal judgement closely analyzes the ways in which Israel’s current policies and actions in the West Bank constitute both the systematic oppression of one group and privileging of the other with the intent to maintain a regime of domination, and inhumane acts, including persecution and denial of rights.

Sfard finds Israel’s settlement project and “creeping legal annexation” of the West Bank to be indisputable evidence that Israel intends to maintain permanent control over the area. Safrd marks the February 2017 passage by Israel’s Knesset of Israel’s “Regulation Law” — a law governing land usage rights in the West Bank designed explicitly to take Palestinian land for the benefit of settlers — a “seminal moment” in the evolution of Israel’s West Bank regime into an apartheid system, noting that this was the first time that the Israeli Knesset passed a law to directly govern matters in the West Bank (read more here about the Regulation Law). FMEP has tracked the Knesset’s creeping legal annexation of the West Bank in its regularly updated Annexation Policy Tables,  available here (Table #2).

Speaking to +972 Magazine, Sfard said that the goal of the legal opinion is to:

“change the internal Israeli discourse, and no longer talk about our presence in the West Bank as an occupation that is temporary, but as an illegitimate crime.”

“Apartheid is a crime against humanity, and it is a reality today, but we have the power and the responsibility to end it. We call on all people who wish to leave a better future for the coming generations of Palestinians and Israelis to demand that our decision makers act now to end apartheid and occupation. All Israeli and Palestinian children deserve a future of freedom and equality, free from apartheid.”

This week, Mort Klein, the head of the far right-wing Zionist Organization of American (ZOA),  told the Jerusalem Post that a U.S. official told him that there is “more than a 50% chance” chance that Trump team deciding on annexation will make their decision within 45 days. Klein — famous these days for Tweets and comments that get him accused regularly (sometimes daily) of being a racist, an Islamophobe, and of cozying up to antisemites — is also one of the rare members of the public known to have access in the Trump Administration, no doubt because the ZOA’s policies align neatly with those Trump officials responsible for Israel policy.

Trump’s Israel team – Jared Kushner, Avi Berkowitz, and Scott Leith – reportedly met (again) on July 8th, reconvening after meetings last week ended in no decision about annexation. A source told the Post that a decision this month (July) is “still possible,” despite repeated delays and a shift in focus in Israel and the U.S. to fighting a resurgence of the coronavirus.

In a new paper – entitled, “Is there a ‘Likeliest’ Annexation Scenario?” – Israel NGO Terrestrial Jerusalem, led by Jerusalem expert Daniel Seidemann,  predicts that if Netanyahu follows through on his annexation pledge, there are two very compelling reasons to believe that he will do so by annexing the so-called “settlement blocs” closest to Jerusalem: Ma’ale Adumim, Givat Ze’ev, Beitar Illit, Efrat, and the entire Etzion Bloc. 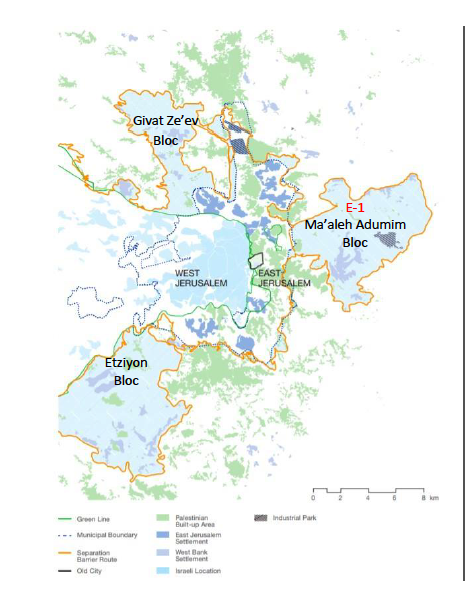 Laying out its logic, Terrestrial Jerusalem points to Netanyahu’s longstanding goal of uniting “Greater Jerusalem” by expanding the Jerusalem Municipality in order to annex as many nearby settlements as possible. The report details Netanayhu’s efforts to do so in detail, starting in 1997.

In addition, the “settlement blocs” doctrine – which has been prominently normalized by the likes of David Makovsky, Dennis Ross, and Michael Koplow – has provided Nentanyahu with an “off-the-rack” annexation option. This doctrine, on the basis of claimed “pragmatism,” has sought to allow Israel to continue unrestricted settlement expansion within large areas located near the Green Line (aka, the 1948 Armistice Line). After three decades of touting this doctrine, Netanyahu can now use it as the basis of his annexation.

Warning of the consequences of this “most likely” annexation scenario, Terrestrial Jerusalem writes:

“The annexation of one or more of the settlement blocs will have a devastating impact on the very possibility of any future agreement between Israel and Palestine. It will fragment the built-up Palestinian areas in greater Jerusalem, condemning the Palestinians to permanent occupation in an archipelago of disjointed, disconnected villages. The annexation of East Jerusalem, Ma’aleh Adumim, the Etzion Bloc and Givat Ze’ev alone would cumulatively seize 225 sq. km. of the landmass of the West Bank.”

Another Yitzhar Outpost Demolished, Another Violent Encounter Between IDF & Settlers

On July 10th, the IDF demolished an outpost that was illegally constructed by 30 settlers earlier that day. Settlers attempted to violently prevent the IDF soldiers from reaching the site of their outpost by setting up roadblocks using burning tires, and the attacking the troops with pepper spray and even threw punches during their assault on the troops.

The outpost squatters were from the radical and violent Yitzhar settlement, located in the heart of the West Bank just southeast of Nablus. The outpost – named “Kippah Sruga” by the settlers – was built in an area that the military commander marked as a “closed military zone” where civilians are not permitted to enter much less take up (illegal) residence.

Unsurprising, the leader of the Yitzhar settlement rushed to the defense of the settlers involved in the attack on the IDF. A spokesperson released a statement expressing regret that:

“some of the officers arrived at the scene without wearing masks [and] some did not have tags [identifying them as police]. The Border police officers used harsh violence against residents who did not do a thing. Of course we oppose stone-throwing and these incidents should have no place in Yitzhar.”

The radical settler group Regavim – which has dedicated itself to “helping” Israel police Palestinian construction in the West Bank – has filed a petition with the Jerusalem District Court asking the court to compel the demolition of Palestinian buildings located near the village of Nahalin, claiming that the newly built structures lack Israeli permits and that the Israeli Civil Administration has failed to act.

The group says Palestinians built 20 structures outside of the village, on land that is technically in Area C (the village of Nahalin is designated as Area B under the Olso Accords, but some village lands fall into Area C). Regavim asked the Civil Administration to take advantage of new powers it granted itself in June 2017 (via a military order) that allows it to demolish “new construction” a mere 96 hours after warning Palestinians of its intent (in effect depriving Palestinians of any meaningful opportunity to challenge the planned demolition).

“While our heads of state are debating whether and how sovereignty will be applied, the Palestinian Authority is hard at work, establishing facts on the ground. If we don’t wake up, in a few years we will find ourselves faced with an unchangeable reality – and the security and policy ramifications that come with it.”

Boosting Regavim’s mission, on July 7th newly crowned Settlement Affairs Minister Tzipi Hotovely toured the Mount Hebron Regional settlement council jurisdiction. Hotovely emphasized that part of her mission is to “prevent the Palestinian takeover of Area C” – an Orwellian framing suggesting that Israel is the victim of Palestinian aggressors seeking to steal Israeli land, when exactly the opposite is the case.

Since having its appeal rejected by the Jerusalem District Court on June 24th, the Greek Orthodox Patriarchate is continuing its fight to reclaim three prized properties in Jerusalem that were sold to the radical Ateret Cohanim settler organization under circumstances the Patriarchate claims are fraudulent.

In addition to planning to take its case to the Israeli Supreme Court, a spokesman for the Patriarchate, Father Issa Musleh, said that that Patriarchate will launch an international campaign in hopes of engaging the UN Security Council, Russia, Greece, Cyprus, and others to pressure Israel to return the properties to the church.

“We, the Heads of the Churches and Christian Communities in Jerusalem, stand united in our commitment to safeguard the historical Status Quo of the Holy Sites and rights of the Churches which are universally recognized. The case of Jaffa Gate threatens this Status Quo. We are concerned by the recent judgment of the District Court of Jerusalem, which dismissed evidence demonstrating the Greek Orthodox Church’s case. We strongly support the efforts of the Greek Orthodox Church in their plea for justice…We don’t see this case as a mere property dispute. We see the undertaking of radical groups to take control of properties at Jaffa Gate as a systematic attempt to undermine the integrity of the Holy City, to obstruct the Christian pilgrim route and to weaken the Christian presence in Jerusalem.”

Daniel Wach, who runs a real estate business out of the settlement of Eli — located deep inside the northern part of the West Bank — told AFP that he has done “as much business in the past two months as the last few years.” Wach said that Israeli families are buying now in anticipation of home prices rising after annexation. Post-annexation, Wach predicts will quickly rise 10-15%.

Another real estate agent who exclusively deals with settlements said: “Annexation will make a big difference…It’s gonna be a big market, we’ll need to get ready, work hard for this opportunity.”