On June 17th, hundreds of Israeli police officers carried out the court-ordered evacuation of 10 uninhabited structures in the outpost known as West Tapuah, in an area south of Nablus known to be a hotbed of settler extremism. During the demolition, dozens of settlers attacked the police, throwing bleach, stones, sticks, eggs, and other objects. 11 police officers were injured; 6 settlers were arrested on the scene.

The court ordered the evacuation because settlers built the structures on privately owned Palestinian land. The evacuation comes on the heels of the February 2017 High Court ruling on a petition filed by Yesh Din regarding the outpost. In that ruling, the Court ordered the state to relocate or demolish 17 structures in the West Tapuah outpost, seven of which were relocated (to “state land” in the Tapuah settlement) prior to June 17th. But significantly, the ruling rejected Yesh Din’s motion to have the entire outpost evacuated, and instead accepted the state’s plan to retroactively legalize 18 structures in the outpost that were built on state land. The state argued for the plan based on the settlement “Regulation Law” which is currently being weighed by High Court and expected to be overturned.

The settler violence in the West Tapuah outpost came less than a week after similar settler violence against Israeli forces during the demolition of structures in the Netiv Ha’avot outpost (which the Israeli government also plans on retroactively legalizing). While several left-wing Israeli lawmakers spoke out against the violence coming from the settler movement, right-wing politicians who are typically quick to denounce Palestinian violence against Israeli police have been notably silent. Writing in Yediot Ahronot, former Peace Now Secretary General Yariv Oppenheimer observed:

“Justice Minister Shaked, who sponsored legislation to ramp up punishments for stone throwers, is silent. Internal Security Minister Erdan, who rushes to slam and point an accusing finger at the Arab sector following every incident, is silent. Defense Minister Lieberman, who made his political capital from his incitement against Arab Knesset members, is silent. And Prime Minister Netanyahu has already learned that he shouldn’t get into trouble with the hard core of the right-wing support base. The Tapuach settlers are immune. One doesn’t have to go too far to understand the extent of hypocrisy here. Only seven months ago, the whole country was shocked by the documentation of teenager Ahed Tamimi confronting and slapping two soldiers. The incident was met with endless condemnations from the Right, and although she didn’t physically wound anyone, the demand for her arrest was loud and clear.”

On June 17th, a new Israeli military order entered into effect denying Palestinians living in the West Bank any right to legally challenge most demolition orders issued by the Civil Administration. The new diktat applies in cases where Israeli authorities deem Palestinian construction to be new, defined to mean construction that is incomplete or completed in the past six months. New residential construction may be demolished if still unoccupied or newly occupied (within 30 days). In cases where the owner of the targeted property has a building permit, they have 96 hours within which to apply to have the demolition canceled; if they fail to do so (and fail to self-demolish), Israeli authorities may “remove the structure and anything attached thereto from the property”, so long as it is “not located within the confines of a detailed building plan”, and after consulting with the legal advisor or his representative.

In short, under the new order, Israel can summarily demolish Palestinian homes, with impunity. This is just the latest Israeli effort to deny Palestinians the right to challenge Israeli policies that deprive them of the right to build on their own land.

“About a year ago, the state attempted to use a different method, originally designed to remove illegal settlement outposts. The military declared an area where an entire community resides as a ‘restricted area’ and ordered the removal of any real property found therein, foregoing the need to issue demolition orders for each structure separately. The state has so far issued such orders against three [Palestinian] communities. The communities have petitioned Israel’s High Court of Justice and are awaiting its decision.”

Prior to this new military order, Palestinians had a theoretical right to challenge demolition orders. That legal process was already deeply problematic (usually ending, predictably, with the demolition being carried out), but at least provided some hope and a delay before the family in question lost their home. This new order, in effect, removes even the pretense that Israel offers Palestinians any chance to defend their rights.

“In essence, the new military order removes the façade of judicial review over demolition orders and over Israel’s planning and building policy in the West Bank. This is no trifling matter: upholding the regime of occupation requires façades and Israel goes to great lengths to maintain them. This is true of the military law enforcement system, the military courts and the takeover of tens of thousands of hectares in the West Bank. Israel’s readiness to lift the veil on this matter indicates its plan to accelerate and expand the dispossession of Palestinians throughout the West Bank, and a conviction that it will not be called to task over this either internationally or locally.”

On June 18th, the Israeli Knesset voted on two bills which apply Israeli domestic law over the settlements, further destroying the legal significance the Green Line and effecting the de facto annexation of the settlements.

The first bill, which was passed into law, allows chicken farmers located in the settlements to sell their egg-production quotas to farmers in sovereign Israel (whose quotas are smaller). The second bill, which was passed through its first reading, would allow certain tax revenues from inside sovereign Israel to be sent to the settlements (FMEP covered this bill in the June 8th Settlement Report).

“Carrying out creeping annexation on the backs of the chickens too is getting to be too much. These are quotas from people who are living [in the West Bank] in violation of international law – war criminals who are in the territories as settlers. What is needed is to return them [the settlers] rather than unnecessarily returning the egg quotas that they have there” to Israel.”

“Your agenda is annexation, so don’t carry out creeping annexation. Instead, put it on the table and pass an annexation bill. Let’s see you let the truth blow up in your faces.”

As FMEP has extensively documented, Israel’s accelerating efforts to apply Israel domestic law outside of its sovereign borders is one of the key ways by which Israel is moving to unilaterally annex territory in the West Bank.

The Israeli High Court of Justice has ordered the Justice Ministry to provide more information regarding its 2002 decision to transfer land in the Batan al Hawa area of Silwan, in East Jerusalem, to a trust controlled by the Ateret Cohanim settler organization. The Court asked the Justice Ministry to explain how it determined that the original deed from the Ottoman era was eligible for transfer, and if the 700 Palestinians affected by the deed transfer were given proper notice. The Court also asked the petitioners to provide information on any previous legal data involving the land.

Bibi Calls (again) for Permanent Control Over the West Bank

On June 17th, the Israeli Shin Bet announced that it had uncovered a Hamas cell in Nablus that had allegedly been working for months to plan bombings and suicide attacks on Tel Aviv, Jerusalem, and the Itamar settlement. In response, Prime Minister Netanyahu said, “Hamas is trying to harm us both from Gaza and from Judea and Samaria. That’s why we will continue to maintain security control over all the territory west of the Jordan [River].”

This is not the first time Netanyahu has said that Israel will never give up the West Bank. For example, in August 2017, he vowed that no more settlements would ever be removed and, speaking of the West Bank, promised, “We are here to stay, forever.” In a speech delivered in July 2014, during Israel’s military assault on Gaza, Netanyahu stated: “I think the Israeli people understand now what I always say: that there cannot be a situation, under any agreement, in which we relinquish security control of the territory west of the River Jordan.”

A new report published by Al-Haq – “Hidden In Plain Sight: The Village Of Nabi Samwil” – examines how the lives of Palestinians living in the village of Nabi Samwil have been severely impacted by Israel’s discriminatory planning policies. Al-Haq shows how Israel’s treatment of Nabi Samwil is aimed at displacing Palestinians from the area by creating “a coercive environment that propels their transfer from Nabi Samwil.” 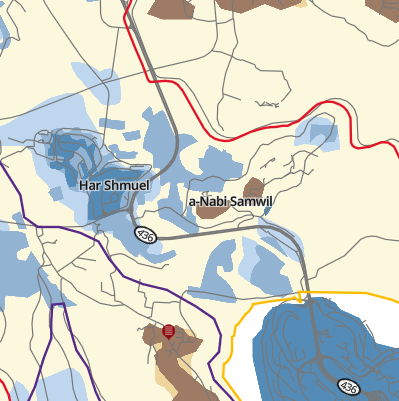 Located on one of highest mountain tops east of Jerusalem, Nabi Samwil has been a target for Israeli takeover since 1971 (at least), when Israeli lawmakers lamented the failure of the government to include Nabi Samwil in the municipal borders of Jerusalem that were expanded following the 1967 war. Arguing that the village was of high strategic importance, the Israeli government took actions to encourage Palestinians to leave – including demolishing 52 homes in a single day – while advancing plans to build Israeli settlements in the area.

The situation took a turn for the worse in 1995 when, in light of the state’s new focus on the religious significance of the area, which is said to be where the prophet Samuel is buried, Israel declared the area a national park. Since then, Israel has undertaken excavations that have further negatively impacted Nabi Samwil residents.

The lives of Nabi Samwil’s residents became nearly unbearable starting in 2005, when Israel built its West Bank separation barrier to the east of the village – in effect isolating Nabi Samwil. The village is still technically located in the West Bank, not Jerusalem. Its residents carry West Bank ID cards, meaning they are legally forbidden from entering Israel without a special permit (which few have) and must look to the West Bank – now cut off from them by the barrier, for all their needs. In order to enter/exit the West Bank residents must pass through an Israeli checkpoint, where Israeli regulations prevent them from carrying virtually anything with them.

As a result, living conditions in Nabi Samwil – including decaying house, absence of health, education, and sanitation services, no local employment, and being cut off from the fabric of life of the West Bank (other Palestinians cannot visit Nabi Samwil unless they have an Israeli-issued permit to enter Jerusalem) – are among the worst in the entire West Bank. Efforts to improve these conditions have for years been blocked by Israel, even as settlement construction surges in the surrounding area.

Despite all of this, Nabi Samwil’s residents refuse to leave.

“Every aspect of life for Palestinians in Nabi Samwil is shaped and impacted by an array of Israeli policies and practices that target the land and its people. As described by one resident, living in Nabi Samwil is like being confined to ‘an invisible cage.’”

United Nations Secretary General Antonio Guterres is expected to release a new report that will be harshly critical of Israel’s handling of protests along the Gaza fence and, once again, call out Israel for its unabated, illegal settlement activity. The U.S. reportedly tried to suppress the report, which was leaked to the press before Amb. Nikki Haley announced the U.S. withdrawal from the UN Human Rights Council on June 19th.