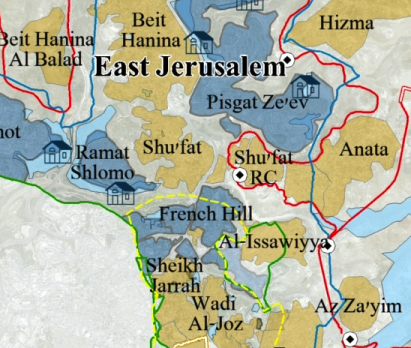 The Israeli government in recent days deposited for public review six plans to expand the East Jerusalem settlement of Pisgat Ze’ev, totaling 1,064 new settlement units. After being deposited, the public has 60 days to submit objections, which will then be considered by the High Planning Council which will either recommend changes to the plan or validate it (meaning, give it final approval).

“Most of the plans will expand Pisgat Ze’ev to the west, pushing it further to the limits of Beit Hanina, and east toward Hizma [two Palestinian neighborhoods in the norther part of East Jerusalem]. The narrowing proximity of Israeli and Palestinian neighborhoods along the northern perimeter increases tensions on the ground, throwing into stark relief the endemic discrimination between planning and resource investment in Palestinian and Israeli neighborhoods. Further, enduring discrimination in the planning process – the suppression of detailed outline plans (requisite for access to building permits) for Palestinian residents alongside continued growth and expansion of Israeli neighborhoods/settlements in East Jerusalem – serves as a powerful Palestinian displacement mechanism in support of Israel’s demographic goals.”

On June 25th, the Knesset Constitution, Law, and Justice Committee considered a bill, introduced by Justice Minister Ayelet Shaked (Jewish Home), that would empower Cabinet Ministers to select their own ministerial legal advisors. Historically non-political positions, the ministerial legal advisors, referred to as “gatekeepers,” work to ensure that ministerial activities are taken up and implemented in accordance with Israeli law. This move is just the latest Shaked effort to politicize elements of the Israeli legal environment in favor of the de facto annexation of settlements.

Under current Israeli law, legal advisors are appointed through a public tender process that ministers cannot influence. Under Shaked’s bill, each ministry would create a selection committee to the fill the position. The members of the selection committee would be chosen by the relevant minister, and the committee’s decision on a candidate would then require the approval of the relevant minister and the Attorney General. The proposal would effectively allow each minister to choose the legal advisor he or she wants. Haaretz explains:

“The ‘selection committee’ would exist in name only, a way to whitewash the complete politicization of the position of ministry counsel. In the name of governability, Shaked seeks to eliminate the gatekeeper function of the legal adviser, protecting human and minority rights and fighting corruption and damage to proper public administration.”

Current Attorney General Avichai Mandelblit submitted an 11-page brief to the Knesset ahead of the hearing, which he attended in person to argue against the bill. He was joined by two former Attorneys General, Yitzhak Zamir and Elyakim Rubinstein, who also argued against the bill in the Knesset on June 25th.  Zamir told the committee, “the entire legal community,” opposes the politicization of the ministerial legal advisor position as proposed in the bill.

Shortly after assuming office in 2015, Shaked hired a private lawyer, Amir Fisher (who also represents the settler group Regavim), to essentially write the State’s responses to petitions before the High court that deal with settlements. In June 2017, Shaked announced that all Knesset bill’s seeking government backing must include a legal opinion explaining the method by which the bill can be applied to the settlements (by Military Order or directly). In January 2018, Shaked announced that she had reorganized the Justice Ministry in order to create a new unit tasked with coordinating the application of Israeli laws in the settlements across government ministries. In February 2018, the Ministerial Committee for Legislation voted to give government backing to a bill introduced by Shaked which would transfer jurisdiction over certain West Bank legal petitions (including Palestinian petitions relating to land disputes, travel permits, and building permits) from the High Court of Justice to the Jerusalem District Court – where Shaked installed a pro-settlement judge. The bill received government backing in February 2018 and passed its first reading in the Knesset May 2018. In April 2018, Shaked and Education Minister Naftali Bennett (Jewish Home) advanced a bill that would allow the Knesset to reinstate a law that the High Court of Justice overturned (the Ministerial Committee on Legislation, of which Shaked and Bennett are members, voted to give government backing to the bill in May 2018).

FMEP tracks all these developments in the Israeli legal system with regards to settlements and annexation in its regularly-updated annexation policy tables. 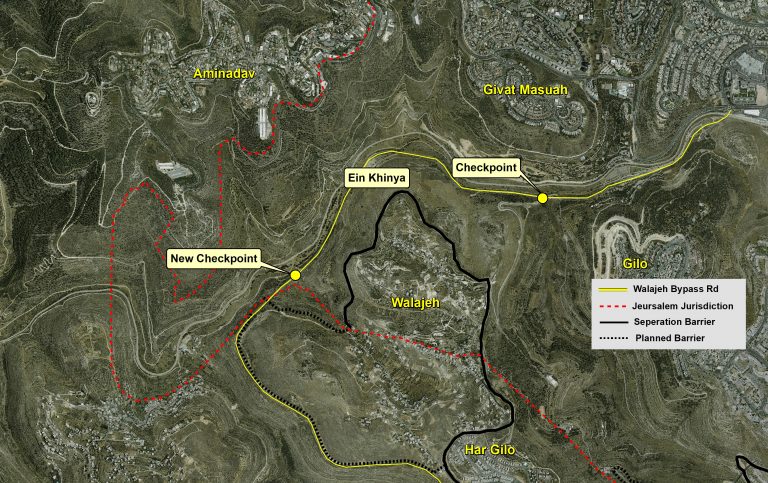 Haaretz reports that that the Jerusalem District Planning Committee gave final approval to a plan to relocate the “Ein Yael” checkpoint, which controls traffic into and out of the Palestinian village of al-Walajah. By moving the checkpoint, Israel will be able to prevent Palestinian access to the recently renovated Ein Haniya spring and further consolidate Israeli control over the village’s access to Jerusalem. 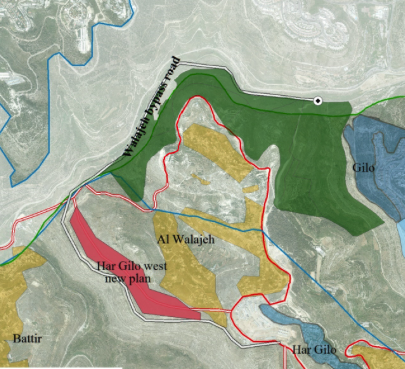 Haaretz observes that the relocation of the checkpoint, coupled with the June 15th advancement of a plan to build the Har Gilo West settlement (see FMEP reporting here) will completely isolate al-Walajah and create an “unbroken stretch of Jewish construction from Jerusalem to Bethlehem in the West Bank.”

“Har Gilo’s expansion and the checkpoint’s relocation give us an opportunity to see the true significance of the greater Jerusalem plan. The expansion will create contiguity between Jerusalem and the settlements near Bethlehem, and also strangle Al-Walaja. These are two sides of the same coin. The situation in which Israel chooses to expand settlements in a way meant to perpetuate its control over millions of Palestinians without citizenship cannot be sustainable. But when the day we finally understand this arrives, the price of fixing it will be much higher.”

FMEP has repeatedly documented various Israeli efforts to seal off al-Walajah from Jerusalem. Residents of al-Walajah have fought the growing encroachment by the nearby Etzion settlement bloc and the Israeli government’s attempt to de facto annex the bloc as part of “Greater Jerusalem.” Ir Amim explains several prongs of this effort, including a particularly unbelievable section of Israel’s separation barrier planned to almost completely encircle the village, to turn its valuable agricultural land into an urban park for Jerusalem, and construction of a highway that will connect the Etzion settlement bloc to Jerusalem with Israeli-only bypass roads.

Haaretz reports that the Israeli Education Ministry is supporting two farm schools built on privately owned Palestinian land in the West Bank. The farms in questions – one near the Efrat settlement and one near the Geva Benyamin settlement – were built by local settlement councils for “ecological agricultural education,” and are officially supported by the Education Ministry. In 2017, the Efrat settlement received $274,000 USD from the government to build the farm (the settlement’s budget did not specify which ministry transferred the funds).

The Efrat local council argued that their farm school is located on state land (and therefore, even if built improperly, is eligible for retroactive legalization). However, the council acknowledges the school is outside of the so-called “blue line,” which is the Israeli government’s demarcation of land in the West Bank that it has granted to settlements. The council’s disregard for the blue line’s relevance adds to the call to disband the IDF team responsible for accurately demarcating the “blue line.”  If the blue line team is disbanded, Israel will cease making any effort to identify if and where settlement boundaries include private Palestinian land, let alone retroactively returning such land to the control of its owners. Israeli Attorney General Avichai Mandelblit has reportedly already agreed to this recommendation.

The Israeli Anthropological Association voted 49-25 to stop cooperating with institutes of higher education based in the occupied West Bank, a ban which extends to holding “conferences and workshops or any general interaction.” The Association states that the decision is applied only to institutions, not students or professors associated with the institutes.

In a statement, the Israeli Anthropological Association said:

“Putting Ariel University, Herzog College, and Orot Israel College [all in West Bank settlements] harms both Israeli society and the academy (and…) it undercuts the Council’s position as a barrier to the politicization of the Israeli academy, science, and higher education, and drags academics working in Israeli academic institutions into supporting the occupation and annexation efforts.”

The decision follows the February 2018 passage of a bill to extend Israeli domestic law over universities and colleges in the settlements. Know as the “Ariel Bill,” it effectively annexes colleges and universities in settlements by bringing them under the authority of the domestic Israeli Council for Higher Education.