Despite criticism from the High Court of Justice, this week the Prime Minister’s office finalized the appointment of settler leader Pinchas Wallerstein to head a government team tasked with leading the process of retroactively legalizing illegal outposts across the West Bank. As FMEP reported when Wallerstein’s appointment was first announced in late October 2017, Wallerstein has been prosecuted for knowingly violating Israeli law by building a sewage plant near the Ofra settlement on private Palestinian land; has admitted to issuing forged building permits for settlement construction without the authority to do so; and has admitted to lying (again) to government authorities to expedite the construction of the (since evacuated) building the Amona outpost.

The team Wallerstein will now lead is tasked with developing legal cases – likely based on new legal precedents and opinions (here, here, and most recently here) established by Israeli Attorney General Avichai Mandelblit that support the appropriation of private Palestinian land for a public good – to “regularize” outposts (i.e., convert outposts built in violation of Israeli law into official “legal” settlements). The government has already begun to the lay the groundwork for Wallerstein’s work: a leaked recording that surfaced in mid-January revealed that a small team within the Defense Ministry has spent months identifying 70 outposts across the West Bank that it believes can be retroactively legalized.

With this appointment, Wallerstein — who has worked full-time to strengthen settlements since 1979 — will lead government-backed effort to shape the ever-evolving legal mechanisms for justifying, in the eyes of Israeli courts, the appropriation of as much private Palestinian land as possible in order to expand and entrench Israeli settlements and outposts. And notably, the legalization of these outposts will mean, in effect, that while for years Israel committed to not establish new settlements, new settlements were in reality being established continuously through unofficial means.

Plans Advance for Settlement Expansion, Including “Unusual” Plan for the Netiv Ha’avot Outpost

This week, the High Planning Council of the Israeli Civil Administration (the arm of the Israeli Defense Ministry that is the sovereign over the West Bank, governing all aspects of life) advanced several plans to expand settlements and outposts across the West Bank.

Settlement watchdog Peace Now notes that the approvals include plans both for the creation of new settlement “areas” (expanding the footprint of settlements in the West Bank) and expansion within the existing footprints:

The Defense Ministry tried to minimize the significance of these approvals, calling them “non-residential” or “less significant,” because the High Planning Council is only supposed to convene a few times a year, per a reported agreement with the United States. The High Planning Council met once already this year, and is not due for another (what the Defense Ministry might call “significant”) meeting until April.

Peace Now responded to the plans the Defense Ministry’s claim with a statement saying,

“The government is building new settlement areas under the guise of ‘insignificant’ plans that will not include housing units. This is an old trick used to establish new settlements without calling them that by name. All of these plans—the construction of a hotel and tourist complex in the Jordan Valley, an educational campus in an illegal outpost, and even a cemetery as the first stage in the construction of a new industrial zone—in actuality create new settlements. The Netanyahu government has lost all the brakes on the road to de facto annexation of the West Bank, and it continues to distance Israel from the prospects for peace and the two-state solution.”

The plan for the Netiv Ha’avot outpost bears further explanation:

FMEP has covered the many unfolding storylines in the Netiv Ha’avot drama repeatedly and in detail, but as a reminder: in 2016 the Israeli High Court of Justice ordered the demolition of the Netiv Ha’avot outpost. As of now, 15 structures in the outpost are scheduled to be demolished next month, though efforts are still ongoing to save the structures from complete demolition. High ranking officials in the Israeli government, including Yesh Atid’s leader Yair Lapid, have supported the outposts campaign not only to save the 15 structures but to retroactively legalize the entire outpost. If the latter campaign succeeds, it will mean that the newly approved mobile home site will be available for additional settlers to inhabit for at least three years.

The Knesset this week passed a bill that extends the state’s jurisdiction outside of its borders, bringing colleges and universities in settlements under the authority of the Israeli Council for Higher Education, among other things paving the way for establishment of a medical school funded by US settlement backer (and key Netanyahu and Trump supporter) Sheldon Adelson. FMEP previously reported on this bill and its implications on Feb. 1, 2018 when it passed first reading in the Knesset (a signal that the ruling coalition had approved its passage). Though limited in its direct impact, the bill’s authors and supporters have effectively created the rhetorical and legislative space in which the extraterritorial application of Israeli law is no longer questioned, nor is the ultimate end goal of annexing as much West Bank land as possible.

Unsurprisingly, the Trump Administration offered no criticism of the move.

“Just as there is no reason why Ariel University should be managed by a different council for higher education, we hope that the Jewish communities in Judea, Samaria and the Jordan Valley will soon be placed under Israeli sovereignty just like all other Jewish communities in the State of Israel”

“…represents another dangerous step in the annexation of the occupied West Bank…All settlements are illegal and constitute a war crime under the Rome Statute of the International Criminal Court and a direct violation of international law and conventions, including UNSC resolution 2334. Israel is thereby demonstrating its intent to prolong and consolidate its military occupation by working to ‘legalize’ the presence of extremist Jewish settlers, institutions and settlements in the occupied Palestinian territory.”

Prime Minister Benjamin Netanyahu this week intervened to block a vote in the Israeli cabinet on whether to lend government support to a bill in the Knesset that seeks to extend Israeli domestic law to “areas of settlement in Judea and Samaria.” The bill is modelled on a resolution adopted in January, with Netanyahu’s support, by the Likud Central Committee. That resolution calling for the formal annexation of the settlements.

In explaining his decision to block the vote at a Likud faction meeting, Netanyahu pleaded with his party to hold off on settlement annexation while he coordinated the matter with the White House, stating that he has been in discussions with the Trump Administration about “applying sovereignty” to the settlements for “some time.” A White House spokesman for Jared Kushner (who officially leads the Trump Administration’s Israel-Palestine peace efforts) strongly denied that the U.S. had engaged in any discussions with Israel about plans to annex the West Bank. The statement did not weigh in on those plans, instead reaffirming the U.S. commitment to brokering peace. Reportedly, U.S. officials privately told the Israeli government to put out a correction of Netanyahu’s statement and a senior Israeli official later released a statement partially walking back Netanyahu’s claim, suggesting instead that Netanyahu has kept the U.S. informed about various proposals in the Knesset (there are several annexation proposals that have already passed and some that are still pending).

Ignoring the kerfuffle, several MKs called on Netanyahu to ignore U.S. statements and proceed with annexation.

“The Trump Administration must be unequivocal in both its public statements and its private discussions with Israeli officials that the United States regards annexation as entirely unacceptable.”

“It would be completely irresponsible for the Trump administration to contemplate endorsing unilateral annexation in any way. US officials should be strongly warning Israel that such a move would be unacceptable — not holding discussions that could give annexation the green light.”

Ir Amim reports that the Jerusalem Local Planning and Building Committee met last week to privately discuss three plans for new East Jerusalem settlement projects, all on the Mount of Olives. The three plans were all drafted by the head architect of the Elad settler organization [learn more about Elad, here]. The meeting was an attempt to circumvent the standard planning process that governs construction projects in Jerusalem – a process which requires public hearings. 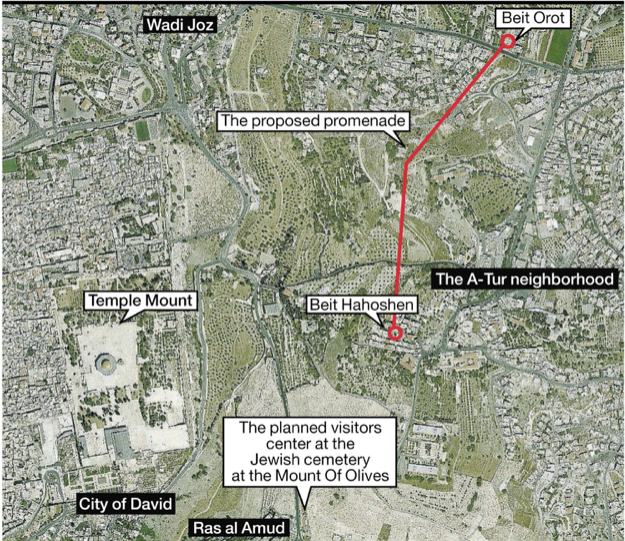 Two of the plans relate to the proposal for a new promenade connecting two settlement enclaves (Beit Orot and Beith Hahoshen) located inside the Palestinian neighborhood of A-Tur, the construction of which will require the expropriation of private Palestinian land.

The third plan is for a visitors’ center (to be run by Elad) abutting the Mount of Olives Cemetery – a plan rumored to be moving forward in June 2017. At that time, Peace Now slammed the plan, saying:

“Dragged by settler organizations, the Israeli government is willing to go out of its way to approve this sensitive plan through a highly unusual procedure. In the current political context, to establish a visitor center next to a mosque and 300 meters away from Temple Mount/Al-Haram A-Sharif is to play with fire. A visitor center in this sensitive area could have far reaching implications on the future of the two state solution and the possibility for a compromise in Jerusalem.”

“Over the past two years we have witnessed increased settlement activity under the guise of tourism and heritage initiatives around the Old City. The Old City and the neighborhoods around it are the home of 100,000 Palestinians…On one hand the authorities make it hard for residents to get building permits and deny them adequate services. On the other, they are advancing in dubious ways initiatives aimed at serving the settlement organizations in the eastern part of the city.”

In an interview with Adelson-financed Israeli daily newspaper Israel Hayom, President Trump said, “The settlements are something that very much complicates and always have complicated making peace, so I think Israel has to be very careful with the settlements.”

When asked about the significance of Trump’s criticism of settlements, FMEP President Lara Friedman said:

“He didn’t raise the issue of settlements, he was asked about it and gave a word salad response that implies nothing….There was nothing that indicated that there will be any pressure on Israel in response to the settlements. Since this administration came in, what they say has matched what their feet are doing. They are suggesting policies that are sympathetic to the Israeli right and far-right. There is nothing in [the interview] that contradicts their policy.”