The bid to retroactively legalize the Havat Gilad outpost – home to the Israeli settler who was murdered January 9, 2018 – took several turns over the past week. Two days after the murder, Prime Minister Netanyahu ordered the Defense Ministry to connect the illegal outpost to the Israeli national power grid, a move that would require the kind of major infrastructure work that would entrench the outpost’s presence. On January 15th, Israeli Defense Minister Avigdor Liberman (who is himself a settler) presented a symbolic resolution to the Israeli cabinet that calls for the retroactive legalization for the Havat Gilad. The settler-run news outlet Arutz reported on January 18th that Netanyahu has decided the Israeli cabinet will not consider the resolution on Havat Gilad during its weekly meeting scheduled for this Sunday.

All of this comes amidst widespread and growing calls for the outpost to be legalized. Efforts to turn Havat Gilad into a legal settlement appear, however, to have hit a major snag. On January 15th, Israeli security sources reportedly told the government that the outpost is not eligible for legalization under Israel’s regulation law (specifically passed last year to give Israel a way to suspend the rule of law in order to legalize illegal outposts that could not be legalized any other way). The security sources explained that Havat Gilad was built almost entirely on land that the Israeli land registrar for the West Bank has documented as privately owned by Palestinians. Israeli recognition of Palestinian ownership of the land ostensibly makes Israel’s retroactive legalization of the outpost impossible; the constant evolution of Israeli laws and legal precedents that are crafted to pave the way for regulating all unauthorized Israeli settlement activity in the West Bank, however, suggest that where there is sufficient political will, rule of law (or even the semblance thereof) will not be allowed to stand in the way. In the waning weeks of 2017, the Israeli Attorney General submitted two highly consequential legal opinions (1 & 2) that validate Israeli expropriation of privately owned land for the exclusive benefit of settlers and the regulation of unauthorized outposts. So while regulating Havat Gilad might be impossible under current Israeli law and precedent, there is every reason to expect that this obstacle will be challenged and overcome.

While the fate of the Havat Gilad outpost is occupying headlines, a leaked recording shed light on the Israeli Defense Ministry’s ongoing efforts to advance the retroactive legalization of 70 settlement outposts built illegally (according event to Israeli law) across the West Bank.

Israeli Deputy Defense Minister Ben Dahan was recorded bragging that the Defense Ministry has begun charting out a process to legalize the 70 illegal outposts, with a 4-5 person team working for the past six months to catalogue every outpost’s unique situation and to prescribe a course of action for each.

Around the same time this outpost team reportedly started its work, Israeli Attorney General Avichai Mandleblit forced Defense Minister Liberman to create a division in the Defense Ministry responsible for enforcing Israeli planning laws in settlements and outposts. It was also around this same time that the Israeli government offered its first defense of the Regulation Law to the High Court of Justice, which Liberman criticized vehemently, arguing that the law could legalize Palestinian construction as well as Israeli.

After the recording made headlines this week, Deputy Defense Minister Dahan was reprimanded and banned from participating in future government efforts to legalize outposts. Notably, the reprimand/ban appears to have little to nothing to do with the activities Dahan was engaged in (Israel’s Regulation Law was passed in order to legalize outposts, the Defense Ministry has a leading role in making that happen, and everyone knew the Ministry was forging ahead with that goal), and more to do with the fact that Dahan was caught bragging about the details of a process that Liberman apparently preferred to keep secret.

Bill to Annex Settlements into the Jerusalem Municipality Regains Steam

Jerusalem expert Danny Seidemann’s NGO, Terrestrial Jerusalem, reports that the Greater Jerusalem bill – which seeks to annex far-flung settlements into the Jerusalem municipality, thereby de facto annexing a large part of the West Bank and gerrymandering a Jewish majority in the city – has renewed momentum.

In October 2017, Netanyahu backed down from advancing the controversial bill, reportedly under pressure from the Trump administration. Now, Netanyahu is once again coming under significant pressure from his own party (recall that on January 1, 2018 the Likud central committee voted in favor of a resolution calling on Netanyahu to annex the settlements) to allow the legislation to move in the Knesset.

The Israeli NGO Kerem Navot reports and documents the first new Israeli bypass road in the West Bank in more than a decade is set to open near Qalailya. Kerem Navot writes:

Most of the bypass roads in the West Bank were built during the 1990s, in parallel to the signing of the Oslo Accords. The last completed bypass road was the Liberman Road built in 2007, connecting Jerusalem with the settlements of Tekoa and Nokdim, southeast of Bethlehem.

This is the Nabi Ilyas bypass road, which is 3.3 kilometers long. The road will enable settlers of Ma’ale Shomron, Karnei Shomron and Kedumim to build settlements along the Qalqiliya Nablus road (Road 55), bypassing the village of Nabi Ilyas and expediting travel time from the settlements into and out of Israel. The road was built following massive pressure from the settler lobby, demanding that Netanyahu approve and fund the construction of two additional bypass roads. And indeed, Channel 7 recently reported that Netanyahu approved and allocated 800 million shekels for the paving of bypass roads in the West Bank.

This is first and foremost for two additional bypass roads that settlers have been trying to promote for years: the bypass road to Al Arroub and the Huwwara bypass road. These roads, too, are planned to be paved on cultivated agricultural land and their paving will cause enormous fiscal damage to residents whose lands will be lost. A third road that settlers are now trying to advance is the Shilo bypass road, which is meant to connect Route 60 with the Alon Road, part of which was already breached in the 1990s. This road is also intended to serve as the access road to the new settlement of Amichai, which Israel is currently building for Amona evacuees.

In November 2014 we exposed Israel’s full-fledged road plan throughout the West Bank. This is a “contingency plan” that was formulated over two decades after Oslo and is comprised of 44 plans for roads proposed by Israel in the territories. The plans have not yet been implemented, though 24 of them have already been approved. The total length of the roads already approved is approximately 157 kilometers.

Upon assessing the mass and sprawl of the roads approved over the years following Oslo, as with the planned roads yet to be approved, it is clear that, contrary to all official declarations, Israeli governments have not internalized the idea that an independent Palestinian state will be established in the West Bank. Israel continues to invest in planning expensive infrastructure deep in the West Bank, intended to entrench settlements and perforate Palestinian contiguity.

Dispossession in the Northern Jordan Valley: Settlements and outposts as part of the land grab process 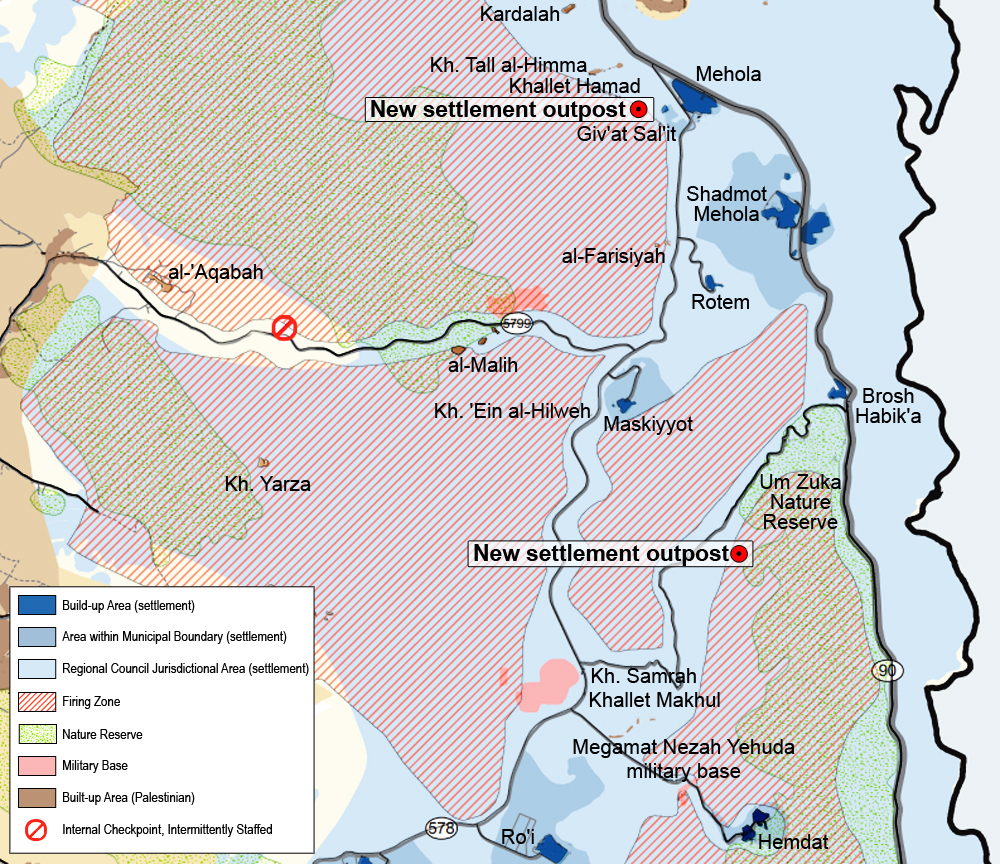 In a new report, B’Tselem documents how two new outposts that were established in the northern Jordan Valley in 2017 have contributed to the escalating dispossession of Palestinian communities in the Jordan Valley, where Israel retains exclusive control over and access to 85% of the land.

At the same time the outposts were allowed to grow, Israel also engaged in policies that amount to the forcible displacement of Palestinian communities around them: Since the outposts were established, the Israeli military has demolished 205 Palestinian structures in nearby communities, rendering 391 people homeless, including 157 children. The Israeli military has also refused to intervene or arrest settlers who engage use violence tactics  in order to prevent Palestinians from accessing their lands.

The establishment of the two new settlement outposts helps Israel realize its main goal for the West Bank: dispossessing Palestinian residents of their homes and land, and taking over their property. Each of the restrictions the state imposes on the Palestinian residents has enabled settlers to encroach on their land, build settlements and settlement outposts and take over vast areas around them. The state may say that the settlement outposts are “illegal” and are a “private initiative” by the settlers, but these claims ring hollow given Israel’s complete inaction to change this reality. The state’s refusal to remove the settlement outposts, prevent the routine attacks and prosecute those responsible for them speaks volumes as to Israel’s reliance on the settlers’ criminal behavior to entrench its control of the area while paying lip service to the law by formally disavowing any ties to them. These actions complement the official measures Israel takes in its pursuit of Palestinian dispossession in the area (and in other parts of the West Bank) and play a key role in the implementation of its policy.

In its “World Report 2018,” Human Rights Watch provides updated information on how Israeli settlement activity in 2017 ran afoul of international law and significantly contributed to the ongoing violation of Palestinian human rights.

Israel continued to provide security, administrative services, housing, education, and medical care for about 607,000 settlers residing in unlawful settlements in the West Bank, including East Jerusalem. Israel’s building of 2,000 new settlement housing units in the period between July 2016 and June 2017 marked an 18 percent decrease over the same period in 2015-2016, but Israeli authorities approved plans for 85 percent more housing units in the first half of 2017 than all of 2016, according to the Israeli group Peace Now. International humanitarian law bars an occupying power’s transfer of its civilians to occupied territory.

Building permits are difficult, if not impossible, for Palestinians to obtain in East Jerusalem or in the 60 percent of the West Bank under exclusive Israeli control (Area C). This has driven Palestinians to construct housing and business structures that are at constant risk of demolition or confiscation by Israel on the grounds of being unauthorized. Palestinians in these areas have access to water, electricity, schools, and other state services that are either far more limited or costlier than the same services that the state makes available to Jewish settlers there.

Of the 381 Palestinian homes and other property demolished in the West Bank (including East Jerusalem) in 2017 as of November 6, displacing 588 people, Israeli authorities sought to justify most for failure to have a building permit. Israel also destroyed the homes of families in retaliation for attacks on Israelis allegedly carried out by a family member, a violation of the international humanitarian law prohibition on collective punishment.