On November 22nd, Israeli Attorney General Avichai Mandleblit issued his much-anticipated response to a petition before the Supreme Court challenging the constitutionality of the “Regulation Law,” a law passed by the Knesset in February 2017 paving the way for the retroactive legalization of 55 Israeli outposts, 4,000 illegally constructed settlement units, and seizure of thousands of dunams of Palestinian agricultural land. Two petitions were filed against the law, one by a group of Israeli NGOs (ACRI, Peace Now, and Yesh Din),the second by a group of Palestinian NGOs including Al-Mezan and Adalah.

In a 72-page opinion, AG Mandleblit said the law is “a sweeping and injurious arrangement that does not meet the test of proportionality,” adding it “will also cause severe discrimination against the Palestinian population in the region.” At the same time, Mandelblit’s underlying argument – consistent with his actions and words in recent weeks – effectively endorsed the goal of retroactively legalizing the illegal construction and land seizures through other legal means.

Although Israeli Attorney General Avichai Mandelblit maintains that the law should be repealed, his position is still problematic from the standpoint of international law. In parallel to his opposition to the law, the AG noted that “validating” the settlements is a worthy act and that the State of Israel now has a number of other tools at its disposal that allow it to “validate” Israeli construction on private Palestinian land that was transferred to a settlement “in good faith.”

In the AG’s response, he authorizes use of these tools including, amongst other measures, expropriation of Palestinian land for “public needs,” such “regulating” the construction of an access road to an illegal Israeli settlement outpost.

Adalah, JLAC, and Al Mezan emphasize that the AG’s position clashes directly with international law explicitly forbidding the construction of settlements and the transfer of the occupying power’s civilian population into occupied territory – this is considered a war crime. International law specifically bans harm to Palestinian property in the West Bank for the purposes of development and expansion of settlements.

Peace Now, ACRI, and Yesh Din also issued a joint statement criticizing the Attorney General for his support for retroactive legalization by means other than the Regulation Law, saying:

…despite opposing the “Regularization Law”, Mandelblit has recently approved other legal steps to allow for the takeover of privately owned Palestinian land. During the past two weeks, the AG issued two legal opinions, one concerning land near the Haresha outpost and another in Ofra, in which he approved expropriation of private Palestinian land for the sole benefit of settlements.

In his legal opinions Mandelblit fails to recognize that any takeover of private Palestinian land for the purpose of settlements stands in violation of IHL, specifically the laws of occupation that apply to the West Bank.

The undersigned organizations [ACRI, Peace Now, and Yesh Din] will continue to work against any government initiative, whether through legislation or by form of legal opinions, which violates human rights of Palestinians in the West Bank.

One Structure Demolished in the Netiv Ha’avot Outpost, But Will Others Follow?

On November 29th, the Israeli army razed an illegally-built structure in the unauthorized outpost of Netiv Ha’avot, near the Elazar settlement south of Jerusalem. Dozens of settlers protested the demolition by barricading themselves inside, forcing the Israeli army to remove them one-by-one against their protests before demolishing the building.

As FMEP reported in October, the Supreme Court upheld a 2016 decision ordering the demolition of 17 structures in Netiv Ha’avot that were built on privately owned Palestinian land. The structure razed on November 29th was the second to be demolished in accordance with this ruling, following the razing of  a memorial statue earlier this year. The remaining 15 structures are residential homes and must be demolished by March 2018, according to the court order.

However, Haaretz reports that Israeli Attorney General Avichai Mandleblit will soon decide whether to save six of the remaining structures from complete demolition by issuing building permits for the sections of the homes that were built (without permits) on Israeli state land. The six structures – unlike the remaining nine – were built mostly on land that has not been proven to be privately owned by Palestinians (allowing Israel to seize it as “state land”). As FMEP reported last month, the Supreme Court has already dismissed a similar petition submitted by the settlers arguing for partial demolitions; the AG’s issuance of building permits would circumvent the court’s decision.

The Netiv Ha’avot settlers are also fighting to retroactively legalize the entire unauthorized Netiv Ha’avot outpost (not only the 17 structures that have been ordered to be demolished), which was built without permission from the Israeli government. In October, the High Planning Council advanced plans to build homes for Netiv Ha’avot residents in an alternate, ostensibly permitted, location; however, the plans specified a parcel of land that is also problematic under Israeli law because it is outside of the borders of any “legal” settlement. Indicative of how the settlement planning process often rewards illegal settlement activity with more settlement activity, the Council sought to address this challenge by ordering the borders of the nearby Alon Shvut settlement to be expanded to incorporate the land where the structures are planned to be built. 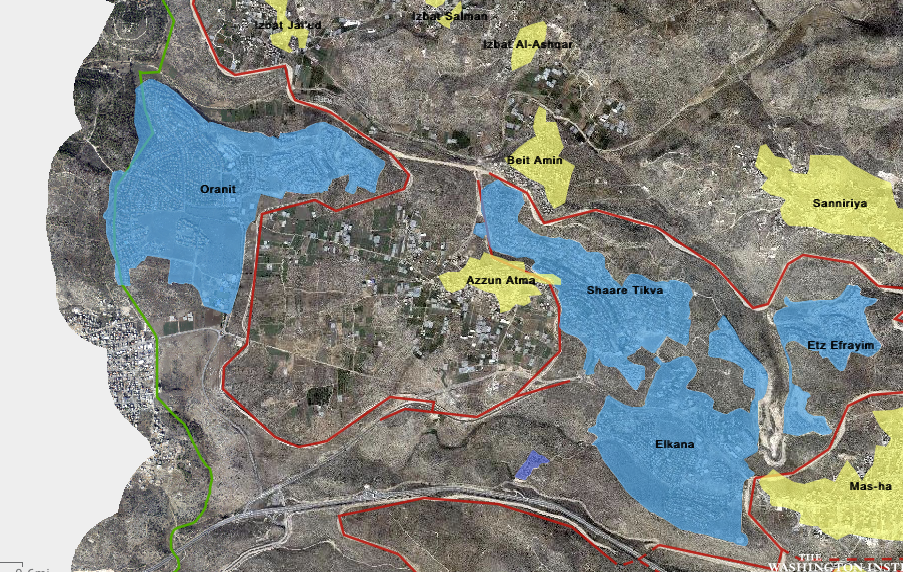 The Israeli Interior Ministry has reportedly recommended creating a new Israeli [settlement] city in the West Bank that unites four West Bank settlements – Etz Efraim, Sha’arei Tikva, Oranit and Elkana – allowing for increased construction on the land between them. The four settlements are all located in the “seam-line” zone, the area created by the weaving route of the Israeli separation barrier that was built to keep many settlements on the Israeli side of the barrier despite being east of the 1967 Green Line.

FMEP will report more details on this story as it develops.

A new report by Ir Amim and Bimkom shines a harsh spotlight on the discriminatory urban planning process in East Jerusalem, as well as the increasing rate of home demolitions that, coupled with settlement expansion, are undermining the future of the Palestinian community there. In three case studies, the report’s authors look at how Israel deliberately blocks applications for planning and building in Palestinian neighborhoods in East Jerusalem, making it impossible for Palestinians to build legally.

This discrimination in planning is the product of a policy driven by demographic considerations – in particular, the objective of increasing the Israeli population while reducing the Palestinian population, with the underlying goal of ensuring Jewish demographic superiority….

The outcome of this policy has a devastating impact at both the individual and community levels. Barriers to legal building push many Palestinians to build without permits. Each year, the Jerusalem Municipality (herein, Municipality) and the District Planning Bureau (formerly under the auspices of the Interior Ministry and now the Finance Ministry), demolish dozens of housing units constructed without permits in the Palestinian neighborhoods of East Jerusalem; in 2016 alone, the authorities demolished 123 housing units. The psychological and economic ramifications of this reality are profound. Moreover, inadequate planning prevents the construction of schools and the development of public spaces and employment and commercial zones, thereby weakening the community as a whole.

This treatment is clearly discriminatory, particularly when contrasted with the fact that the Israeli government continues to approve and fast-track approvals both for settlement planning in construction in major settlement neighborhoods of East Jerusalem and in settlement enclaves located in the heart of Palestinian neighborhoods. For details see this recent report from Peace Now.