In addition, the committee also approved permits for 44 new units for Palestinians in the East Jerusalem neighborhood of Beit Hanina. These permits are an anomaly: for the past 50 years Israel has systematically discriminated against Palestinian building rights, with only about 7% of building permits issued in Jerusalem going to Palestinians (who represent 37% of the population). Bimkom, an Israeli organization that monitors planning and building in Jerusalem, estimates that 20,000 units in East Jerusalem lack permits while an additional 10,000 more units are needed by Palestinians.

Since 1967, the Government of Israel has directly engaged in the construction of 55,000 units for Israelis in East Jerusalem; in contrast, fewer than 600 units have been built for Palestinians in East Jerusalem, the last of which were built 40 years ago. So much for (Jerusalem Mayor Nir) Barkat’s claim ‘we build for everyone.’

In Beit Hanina, as in Palestinian neighborhoods across East Jerusalem, Israeli demolitions of buildings – based on the argument that they lack permits – only add to the misery. The most recent demolition in Beit Hanina happened last month.

For the first time, the Israeli army appears to be preparing to evict Palestinians from their land through the use of a 2003 military order meant to handle the evacuation of unauthorized Israeli outposts. Palestinians living in the northern Jordan Valley discovered the eviction order affecting around 136 acres of their land – which sits near several Israeli settlements.

A lawyer representing the Palestinians in this case submitted a petition to the Israeli Coordinator of Government Activities in the Territories (COGAT) to stop the implementation of the order. The lawyer, Tawfiq Jabareen, argues, “This is a mass expulsion order against the Palestinian population that violates international law.”

The Haaretz Editorial Board powerfully rebutted the Israeli army’s argument that the order does not, in fact, actually call for the evacuation of the Palestinians, but will only demolish structures built without Israeli permission. The Editorial Board writes,

Whatever legal proceeding ensues, the fact is that this declaration is an escalation of the pressure on the local Palestinians and part of the declared Israeli intent to evict as many Palestinians as possible from Area C, which is under total Israeli control, including from the Jordan Valley.

It’s no coincidence that near Ein al-Hilweh [one of the targeted areas] are two expanding unauthorized Jewish settlement outposts whose residents periodically threaten the shepherds and try to scare them away from grazing lands in the area. This trend can and must be stopped, because it’s illegal, unjustified and dangerous. 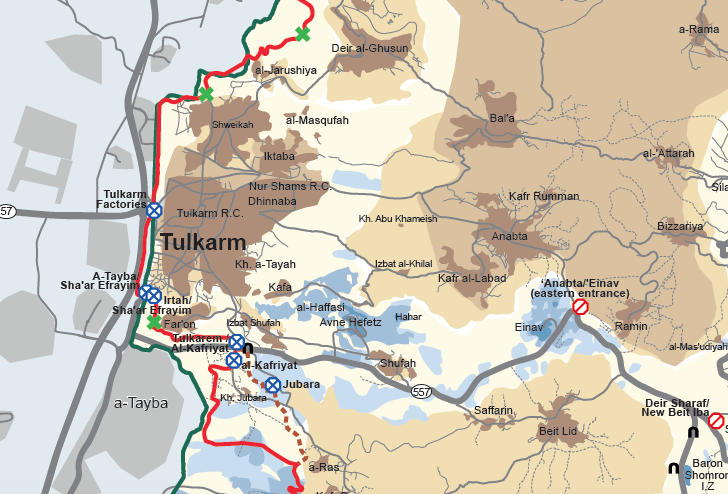 Israel is also moving to seize land near the city of Shufah in the West Bank, southeast of the Palestinian city of Tulkarem. Palestinian news sources report that the IDF notified residents that Israeli intends to take the land in order to build roads and recreational facilities for a nearby settlement, Avnei Hefetz. Earlier this year, Israel seized land from the Shufah village in order to build a power plant and industrial area for the settlement. In October 2017, the Israeli government advanced plans for 135 new units in the Avnei Hefetz settlement.

This new opinion concurs with a Supreme Court ruling issued last month that held Israeli settlers are a part of the “local population” of the West Bank, and can be the beneficiaries of state land seizures for “public use.” It also builds on a precedent set earlier this year in the case of the Amona outpost, when the Court ruled that Israel has a duty to care for Israeli settlers forced out of their homes (because those homes were built illegally on privately-owned Palestinian land). The Court ruled that the state has the authority confiscate “abandoned” Palestinian land to do so (Palestinians are systematically denied the right to access lands that are near settlements, Israeli roads, military bases, firing zones, etc., rendering them “abandoned”). 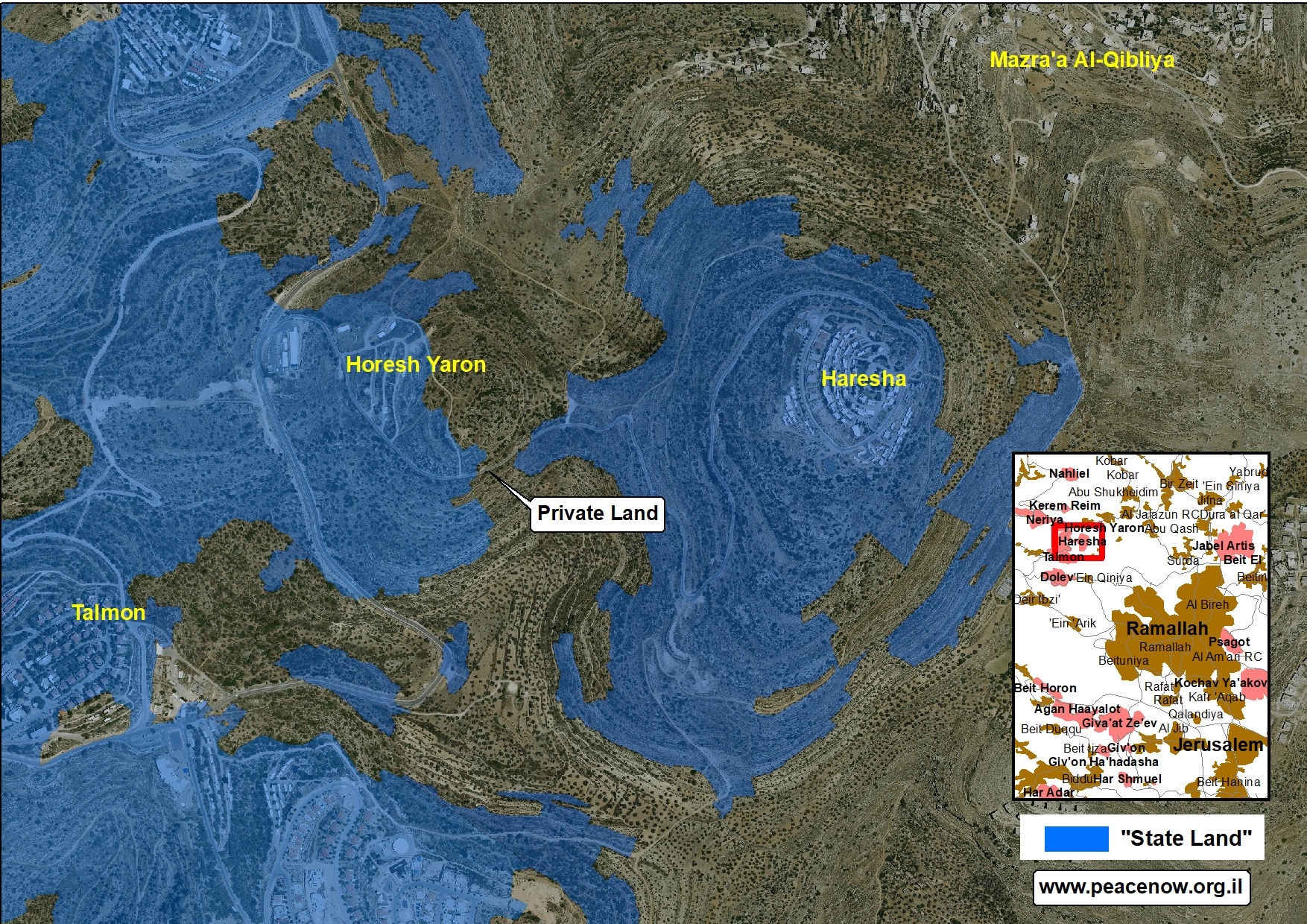 According to the original Amona ruling, the state’s obligation was to provide temporary housing for the affected settlers; according to the subsequent ruling, the state is obligated to care for the settlers by paving roads, without regard to privately owned Palestinian land that would need to be taken. That ruling upheld the state’s confiscation of privately owned Palestinian land in order to legalize an access road to the illegal outpost of Haresha.

Located near Ramallah, the Haresha outpost was established in 1995 without government approval. In January 2010, the State responded to a petition filed by Peace Now and Yesh Din by announcing its intention to retroactively legalize Haresha; less than a year later, in August 2011, Israel seized the land the outpost was built on by declaring it as “state land.” Haresha was approved to become an official settlement in 2015 (Netanyahu legalized 24 other outposts at the same time), but the outpost still needed to submit plans in order to legalize the individual structures. That a planning process has not yet happened – in part because, as Haaretz notes, there is no legal road leading to the outpost. With the access road moving towards legalization, the outpost is set to follow suit.

Speaking to the significance of the decision on the Haresha outpost access road, Israel Justice Minister Shaked said “The attorney general has issued a legal opinion permitting the expropriation of privately owned Palestinian land to permit an access road to [Haresha] that permits the regulation [legalization] of the entire [settlement].” The anti-settlement watchdog Peace Now is expected to appeal the decision upholding the theft of privately owned land for the legalization of the access road. Peace Now issued a statement saying,

Confiscating the land would constitute a severe violation of international humanitarian law and of the Palestinians’ right to own property. The Attorney General’s legal opinion regarding the access road might lead to additional confiscations of private Palestinian lands, strengthening Israel’s stronghold over Palestinian territory. The Attorney General seeks to allow the confiscation of lands owned by Palestinians, who have no voting rights in Israel for the benefit of Israeli settlers with full rights. If the Netanyahu government will continue down this path it will lead us towards a one state reality, based on discrimination and theft.

The Israeli NGO Ir Amim this week released a new policy paper analyzing the devastating ramifications of Israeli efforts to gerrymander a Jewish-majority in Jerusalem. In addition to essential background on Jerusalem’s environs and analysis of the two pieces of pending Jerusalem-related legislation, Ir Amim provides new analysis of the humanitarian, political, and urban consequences that will follow if these measures are implemented.

Looking at the impacts of the Knesset bill intended to excise two Palestinian East Jerusalem neighborhoods from the Jerusalem municipality, creating new Israeli municipalities to govern them, Ir Amim writes:

The bills and plans currently in circulation seek to displace Palestinian residents living in Jerusalem from the city, and to artificially add to Jerusalem Israeli residents from outside of it. Beyond obvious political implications, these moves can be expected to have serious humanitarian ramifications….

Should practical steps be taken to cut off the neighborhoods beyond the Barrier or a sweeping revocation of their residents’ permanent residency status implemented, we can expect another wave of migration to the East Jerusalem neighborhoods within the Barrier, already strained by a serious lack of infrastructure, services, educational institutions and affordable housing. Living conditions and infrastructure in the East Jerusalem neighborhoods inside the Barrier will decline even further. In this scenario of increasing housing shortages and infrastructure collapse, an upsurge in the number of Palestinian residents who rent or buy apartments in Israeli neighborhoods/ settlements such as Pisgat Ze’ev, Armon Hanatziv and French Hill can be expected. These phenomena, which will occur under conditions of acute uncertainty and anxiety, can be expected to significantly elevate friction and the potential for eruptions of violence in the city. Many other thousands of Palestinians – currently residents of Jerusalem – will remain beyond the Separation Barrier, now administratively displaced from their city and transferred to contrived regional authorities, only exacerbating their distress. Even should they be completely separated from Jerusalem, Israel will not be able to escape accountability for the dire political, urban and humanitarian crisis – and the fertile ground for escalating hostility – it has created.

In a new report, Peace Now details the dangerous flood of settlement activity and the de-facto annexation of Area C in the West Bank that the Netanyahu government has pursued without restraint in 2017.  The report covers:

All of the abovementioned developments attest to a quantum leap in the promotion of annexation and the blocking of the possibility of a two-state solution. With the speed of developments all across the West Bank and East Jerusalem—and as red lines are being crossed—we are approaching the final stretch before a two-state solution will be almost impossible, and the anticipated situation will be the long years of bloody conflict of Israeli rule over the Palestinians without hope for change. Thus even with the lack of a final status agreement in sight, it is our duty today to prevent silent annexation efforts and to assure the possibility of a two state solution on the ground.