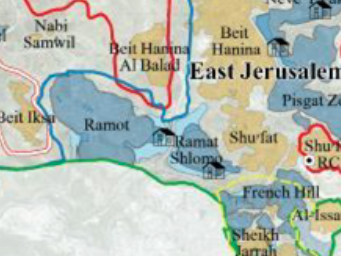 On November 6th, Jerusalem planning authorities granted approval to two settlement projects totalling 652 units in strategic areas that will increase the encroachment of settlements on the Palestinian East Jerusalem neighborhood of Beit Hanina – where the Israeli government is also advancing the first-ever government-backed settlement enclave inside of the neighborhood. This week the Committee approved:

In granting final approval for the Ramat Shlomo plan, the Jerusalem District Planning and Building Committee decided to increase the number of approved units, from the proposed 500 to 640. And significantly, the Committee rejected serious complaints about expropriating privately owned Palestinian land for settlement purposes.

The Israel anti-settlement watchdog NGO Ir Amim filed one such complaint against the plan, explaining:

“Promoted by Israeli developers claiming ownership of the land in question, the Ramat Shlomo plan exemplifies the endemic discrimination in the planning process that serves to foil Palestinian planning and development.  The plan includes Palestinian-owned land, in an area developers have now designated for a park and access road. In order to overcome the legal prohibition against submitting a plan on land not owned by the applicant, the developers successfully engaged the Jerusalem Municipality to sign on as an additional applicant, thereby enabling the expropriation of private Palestinian land.”

“It’s very disappointing that the district committee relied on formalistic reasons to approve a step that violates the property rights of Palestinian landowners through and through. These aren’t extremist settlers in outposts somewhere out on hilltops in Samaria [the northern West Bank] but state institutions that are working in Israel’s capital city. This decision is additional proof that Israeli control in East Jerusalem means a regime based on serious discrimination.”

The new approvals add to an ever-growing tidal wave of settlement activity in East Jerusalem affecting the viability of the two-state solution, while tightening the screws on the local Palestinian population.

Israeli government lawyers told the High Court of Justice that the State of Israel does not know who built an illegal outpost on a disused military base in the Jordan Valley, which settlers have named  “Camp Gadi”, and announced that the Civil Administration will demolish it. If the Civil Administration moves to demolishes the outpost, it will require evicting several settler families who are squatting there, and shutting down a pre-military school that the families have been promoting.

A cornerstone laying ceremony marked the start of construction on the “New Migron” settlement, to be for the settlers who were removed from the illegal Migron outpost. Several government officials were on hand to lay the cornerstone of the new settlement, plans for which were approved in 2017, near the Kochav Yaakov settlement north of Jerusalem.

In 2011, the Israeli High Court ruled that the Migron outpost must be evacuated because it was built on privately owned Palestinian land. Most of the illegal outpost’s  residents were evacuated and most buildings were demolished in Migron in 2012.  Determined to demonstrate its support for settlers in the face of this court-compelled evacuation, the government promised to establish  two new settlements: “New Migron” (located close to Kochav Yaakov settlement) as well as the approval of a plan for 184 housing units east of the Adam settlement (aka Geva Binyamin). All said, the two new settlements and temporary housing for the evicted settlers cost Israeli taxpayers millions of dollars – sending settlers a clear message that for them, law-breaking pays off.

“During such events, it is customary to rejoice, but as someone who accompanied Migron from the moment of the evacuation to the present day, this is not a happy event. We would be happy if we had another legal system that made a logical decision, and I long for the days when the justice system will do justice. The settlement will grow and expand this way from time immemorial. The evacuation attempts will only lead to the strengthening and expansion of settlement.”

“laying the cornerstone means that the territories of Yehudah and Shomron are not negotiable. It is not a subject for sale. We are laying a cornerstone for Migron and we will build it. I will see to it that the Israeli government does so by the end of the year.”

“I did not come here to convince anyone about our rights in the land of Israel, I came here with mixed feelings of happiness from laying the cornerstone, alongside the great sadness of the difficult evacuation five years ago. We are here, first and foremost, thanks to the families of Migron that did not give up.”

According to Maan News, Israeli forces seized 38 acres (155 dunams) of Palestinian land in order to pave a road to the Beit Aryeh settlement, located northwest of Ramallah. Members of the al-Lubban al-Gharbi village council claim that the land is privately owned by Palestinians from the village and called on village residents to find documents proving land ownership in anticipation of an appeal against the construction.

So far this year, the Beit Aryeh settlement has been the beneficiary of two significant settlement advancements totalling 563 new units:

The use of a private law firm is seen as an attempt to bypass the Education Ministry’s own apolitical (for now) legal advisors, and is a breach of the guidelines set years ago for every ministry by the Israeli Attorney General. The guidelines stipulate that in cases where private opinions are sought, the legal advisors for the ministry must supervise the process.

Bennet reportedly used an opinion paper issued by the Herzog Fox & Neeman firm stating the inclusion of Ariel University in the domestic Higher Education Council would not violate existing grant terms between universities in sovereign Israel and the European Union (which does not do business in the occupied territories). The opinion was then presented to members of the Higher Education Council to assuage fears that implementing the new law would result in losing international funding. The opinion said that the potential for funding cuts is “nearly non-existent.”

“You cannot base official policy on an opinion paid for by an interested party. That’s not serious.”

Ariel University has not yet been admitted to the Council, despite the passage of the law in February 2018 and despite Minister Bennett’s repeated threats to end state relations with the Council if it did not immediately grant membership to the school. Israeli President Reuven Rivlin issued a rebuke to Bennett’s threats, saying:

In Reversal, Israeli Ministers Embrace Bill to Allow Knesset to Overrule High Court on Any Issue (Not Just on Deporting Asylum Seekers)

At a meeting on November 4th, ministers in the governing Israeli coalition reportedly decided to abandon a bill that would empower the Knesset to reinstate its plan to deport African asylum seekers after it was struck down by the High Court, in favor of  a much more far-reaching bill granting the Knesset the ability to reinstate any law the High Court strikes down. The passage of that bill would likely impact the fate of not only African asylum seekers but settlement-related legislation that has already been passed – most notably,the settlement Regulation Law – and other undemocratic measures that might follow. This news follows an exact opposite announcement two weeks ago, when Justice Minister Ayelet Shaked embraced the single-issue version of the bill, while promising to make the unlimited version a sticking point in any future coalition agreement.

Notably, the leaders of the current governing coalition decided to make this move at a meeting that was not attended by Kulanu Party leader Moshe Kahlon, who has until now blocked the coalition from advancing the unlimited version bill.

“One must vigorously oppose this bill, which harms the constitutional regime of the State of Israel as a Jewish and democratic state. Removing all restrictions on undermining the human rights of a specific group, as is proposed now, has far-reaching implications for constitutional law and the democratic regime in Israel, and I strongly oppose it.”

The radical settler organization Regavim – which devotes its efforts to systematically mapping out and expelling Palestinians from strategic areas in Jerusalem, the West Bank, and the Negev – presented a new report to the Knesset this week claiming that the Palestinian Authority (PA) is using European funding to take over land in Area C of the West Bank. The report alleges that  the PA uses European money to pave roads, build on strategic military and diplomatic locations, and “steal” water resources, at the expense of Israel.

“If the government does not come to its senses and ‎does something now, the Palestinian plan will create ‎irrevocable changes and facts on the ground.”‎

Adding irony to Regavim’s current efforts to stop “illegal” Palestinian activity in the West Bank, in August 2018 the Israeli daily newspaper Yedioth Ahronoth published a comprehensive investigation into Regavim’s leaders. The group’s stated mission is “to ensure responsible, legal, accountable & environmentally friendly use of Israel’s national lands and the return of the rule of law to all areas and aspects of the land and its preservation.” The investigation revealed, however, that the organization’s efforts to identify and stop illegal construction are merely a tool to dispossess Palestinians of their land.

The Investigation found, in fact, that Regavim and its leaders have a demonstrable disregard for the Israeli planning and building laws that they purport to be dedicated to enforcing, evidenced most plainly by the fact that 15 Regavim officers are living in structures built on privately owned Palestinian land, some with demolition orders issued against them. These include the building where Yehuda Eliyahu, the current executive director of Regavim, lives.

The United Nations Special Rapporteur on Situation of Human Rights in Palestinian Territories, Michael Lynk, issued a new report to the UN General Assembly – half of which is devoted to documenting the Israeli government’s annexation of Palestinian land in East Jerusalem and de facto annexation of land in the occupied West Bank.

The report concludes in part:

“These statements of political intent, together with Israel’s colonizing  acts on the ground, its legislative activity, and its refusal to adhere to its solemn obligations under international law or to follow the direction of the international community with respect to its 51-year-old occupation, have established the probative evidence that Israel has effectively annexed a significant part of the West Bank and is treating this territory as its own. While Israel has not yet declared formal sovereignty over any parts of the West Bank, the Special Rapporteur submits that the strict prohibition against annexation in international law applies not only to a formal declaration, but also to those acts of territorial appropriation by Israel that have been a cumulative part of its efforts to stake a future claim of formal sovereignty over the occupied Palestinian territory.”

In the past three days, Israeli authorities have reported four security incidents near settlements:

On November 7th, the IDF reported that unknown assailants shot at a bus and lightly injured two Israelis near the settlement of Beit El, located deep inside the West Bank near Ramallah.

On November 6th, three Palestinian men were arrested near the Mevo Dotan settlement, south of Jenin,  one of whom was allegedly carrying a gun.

Earlier on November 6th, a Palestinian woman was shot and arrested near the Kfar Adumim settlement, between Jerusalem and Jericho,after allegedly attacking Israeli border policemen with a pair of scissors.

On November 5th, a Palestinian man was shot and arrested after allegedly attempting to stab Israeli settlers and an Israeli IDF officer near the Kiryat Arba settlement, in  Hebron.