The Human Side of the Israeli-Palestinian Conflict: The Current Challenges Facing People-to-People Organizations and Reconciliation Work

The Human Side of the Israeli-Palestinian Conflict: 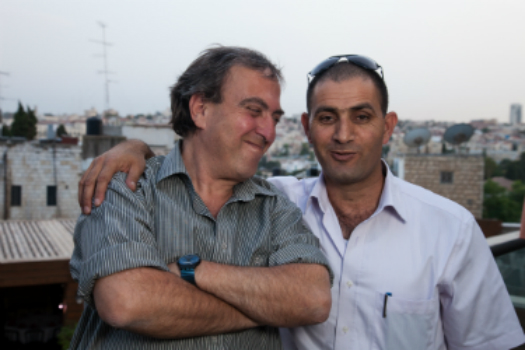 The Parents Circle Families Forum is a joint Israeli-Palestinian organization of more than 600 bereaved families who have lost a close family member to the conflict. Instead of revenge, they have chosen a path of reconciliation. Join PCFF’s Co-directors, Rami Elhanan and Bassam Armin, both fathers who lost children in the conflict, as they share their stories of loss, and their unique choice of forgiveness. Participate in a discussion on the human side of the conflict and why relationship building and a mutual understanding of the “other side” is part of the framework necessary for any sustainable peace agreement. Hear their views on the challenges of People-to-People work in the face of the current political situation.

Rami Elhanan is a seventh generation Jerusalemite graphic designer. He identifies himself as a Jew, an Israeli, and before everything else, a human being. On the first day of the school year in 1997, Rami’s daughter, Smadar, was killed by two Palestinian suicide bombers who murdered 5 people that day. Soon after, Rami joined the Parents Circle as an active member and facilitator, speaking before Israeli, Palestinian, and International audiences. Rami has been a co-director of the PCFF for almost four years.

Bassam Armin was sent to Israeli prison as a seventeen-year-old for his role in the Palestinian resistance. He spent seven years there and eventually started questioning the value of armed resistance. Several years after his release, he co-founded Combatants for Peace. He has refused to pick up arms since his release, even when, in 2007, his ten-year-old daughter, Abir, was killed by an Israeli soldier’s rubber bullet outside her school. He joined the Parents Circle in 2007 and has appeared before many International audiences. In 2019, he was appointed to serve as co-director. He is completing his Masters in Holocaust Studies.