Thinking bigger about Israel’s role in a changing Middle East 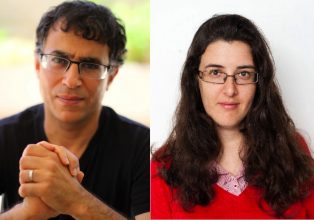 Join the New Israel Fund and the Foundation for Middle East Peace for a timely conversation on the Israel’s role in a changing Middle East with Israeli scholars Elizabeth Tsurkov and Dr. Assaf David. Tsurkov and David are members of the NIF funded organization The Forum for Regional Thinking, working to transform Israeli public discourse on the Middle East — and Israel’s role in it. Hear how through high-quality analyses, the Forum works to offer alternative ideas for the public discourse, new options for policymakers and hope for Israel’s citizens regarding the potential of peace.

Dr. Assaf David is the co-founder and Academic Director at the Forum for Regional Thinking. He teaches in the Department of Political Science at the Hebrew University of Jerusalem. His research focuses on Jordan, civil-military and state-society relations in the Middle East, and Israel in the Middle East.  Dr. David is also the head of Manarat: The Center for Jewish-Arab Relations at The Van Leer Jerusalem Institute.

Elizabeth Tsurkov is a Research Fellow at the Forum for Regional Thinking. Her work focuses on the Syrian civil war, ISIS and movements for social change in the Middle East. Tsurkov’s writings have appeared in the New York Times, Foreign Policy Magazine, Newsweek and +972 Magazine. She has worked with Israeli human rights organizations for over a decade. She earned her B.A. at the Hebrew University, an M.A. in Middle Eastern Studies at Tel Aviv University and recently completed a second master’s degree in Political Science at the University of Chicago. Tsurkov is based in Washington, D.C., where she works for the Education for Peace in Iraq Center, an NGO conducting research and social cohesion programming in Iraq.