Just hours before the Jerusalem Planning Committee was scheduled to advance a new plan to massively expand the Nof Tzion settlement enclave (located inside the Palestinian East Jerusalem neighborhood of Jabal Mukaber), consideration of the plan was removed from the agenda. Consideration of this plan has been postponed several times in recent months, with this latest deferral coming just before U.S. National Security Advisor Jake Sullivan arrived in Israel. 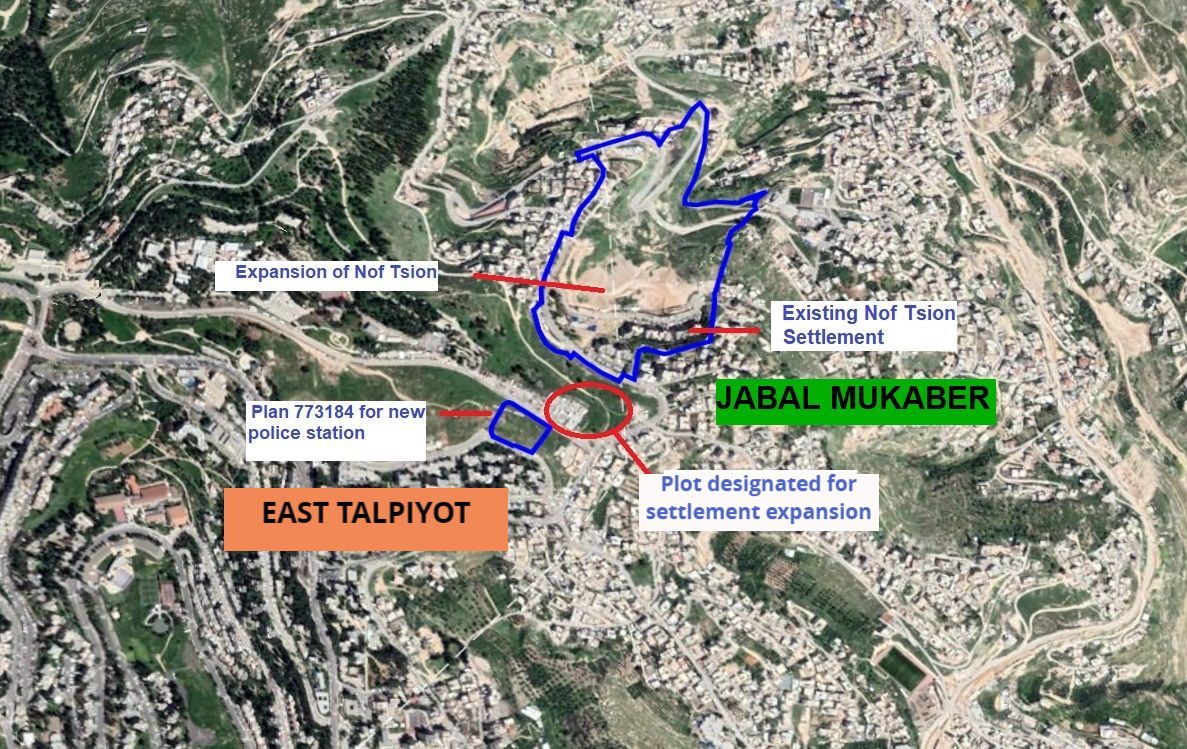 The plan – called “Nof Zahav” – would allow for 100 new residential units and 275 hotel rooms in the settlement enclave, which currently consists of 95 units, plus another  200 under construction. In order to provide sufficient land for this expansion, the Jerusalem Planning Committee is simultaneously advancing another plan to relocate an Israeli police station [the Oz station], currently located on the border of Jabal Mukaber, to a new site across the street. This will leave its original location free for the planned expansion of Nof Zion, while the new site will become a massive new Israeli security headquarters. Ir Amim filed a petition against the police station plan, arguing that it is an affront to the planning needs of the local community and that it represents a continuation of Israel’s systematic, city-wide discrimination against the housing, educational, and service-based needs of Palestinian neighborhoods. A decision on the police station relocation plan is expected soon.

Ir Amim further explains the impact of these plans:

“Expanding the settlement towards the main entrance of Jabal Mukabber will infringe on the residents’ freedom of movement and further disrupt the fabric of life in the neighborhood. Prior experience show that during clashes and periods of tension and instability, Israel rushes to impose collective restrictions under the pretext of protecting Israeli settlers.”

“In Jabel Mukaber, the state is handing over Palestinian homes to settlers just as in Sheikh Jarrah and Silwan… [A new settlement] that controls the entrance to Jabel Mukaber, will deepen the presence of the police, the border guard and armed security guards, which will harm the sense of security and disrupt daily life for the tens of thousands of neighborhood residents.”

Haaretz reports that the coalition deal between the Likud and Religious Zionism parties includes an agreement to hand control of West Bank lands/properties owned by Jews before 1948 (and lost in the 1948 War)  back to their original owners (or their descendants). These assets have been held by the Israeli army since 1967, when Israel established its occupation of the West Bank, and since the 1990s Israeli government policy has viewed the disposition of these assets as a matter for final status talks with Palestinians.

Peace Now and Bimkom estimate that 13,000 dunams (3,250 acres) of land in the West Bank are implicated in this policy, including about 70 buildings in central Hebron, the handover of which will enable  the realization of an Israeli plan to convert the old wholesale market into a new settlement compound.

In addition to buildings in Hebron, the move will affect land located for the most part in the areas surrounding Bethlehem as well as plots in the area of the Palestinian villages of Nabi Samwil, Batir, and Beit Furik – including plots in Area B of the West Bank, as defined by the Oslo Accords.

The Sovereignty Youth Movement – a group of young settlers – has been gathering signatures for a letter calling on the Israeli government to annex the Jordan Valley. The group reportedly plans to send the letter to Prime Minister Netanyahu in the coming days.

Meanwhile, six settlers in the Jordan Valley were caught on film violently attacking a group of tourists and Palestinians who were on a hike near Jericho. Settlers are seen striking the group with clubs and using pepper spray. The Israeli army arrived in time to escort the hikers out of danger, but no arrests were made (or have been since). Three hikers went to the hospital for their injuries.

One Israeli activist familiar with the area identified the attackers seen on video as residents of a nearby outpost, one of whom is known to be violent towards Palestinian shepherds.