95 Palestinians in Silwan are at imminent risk of displacement, after an Israeli court on December 7th upheld a demolition order for the 13-unit apartment building in which they live. The residents received a letter instructing them to vacate the building within one week.

The court had previously instructed the residents to self-demolish the building by December 7th. The residents refused to do so, and as a result, the Jerusalem Municipality is now expected to not only demolish their homes, but to exorbitantly fine them for not doing it themselves. For more on Israel’s tactic of coerced self-demolitions of Palestinian homes (and punitive actions against Palestinians who refuse to give in to this tactic) see this report from Al Haq.

Wafa news reports that two of the families living in the building are facing their second displacement at the hands of Israeli court-ordered demolitions.

Hundreds of Israelis Descend on Site of Former Homesh Settlement, As New Government Agrees to Reestablish It

Hundreds of Israelis this week participated in a ceremony held at a Jewish religious school (a yeshiva) established illegally (under Israeli law) at the site of the former Homesh settlement in the northern West Bank. As a reminder, Homesh was dismantled by the Israeli government in 2005 as part of the Disengagement Law, but Palestinians have continued to be denied access to the land, even as settlers were permitted regular access and have been granted de facto (but not formal) permission to establish and maintain a yeshiva and outpost there.

For years, settlers have been pushing for the re-establishment of the Homesh settlement – including through holding illegal gatherings there, illegally building a yeshiva at the site, and organizing political rallies attended by right-wing politicians.

Today, settlers are close to victory,  as reports suggest that the incoming government — which will be the most far-right, pro-settlements/Greater Israel government in history —  has agreed to re-establish Homesh as part of its coalition deal. To do so would require the government to amend the 2005 Disengagement Law (which not only ordered the dismantling of the Homesh settlement along with three others in the northern West Bank, but also provided for Israel’s withdrawal and removal of all settlements from Gaza).

Settlers Move to Seize New Tract of Land in Silwan 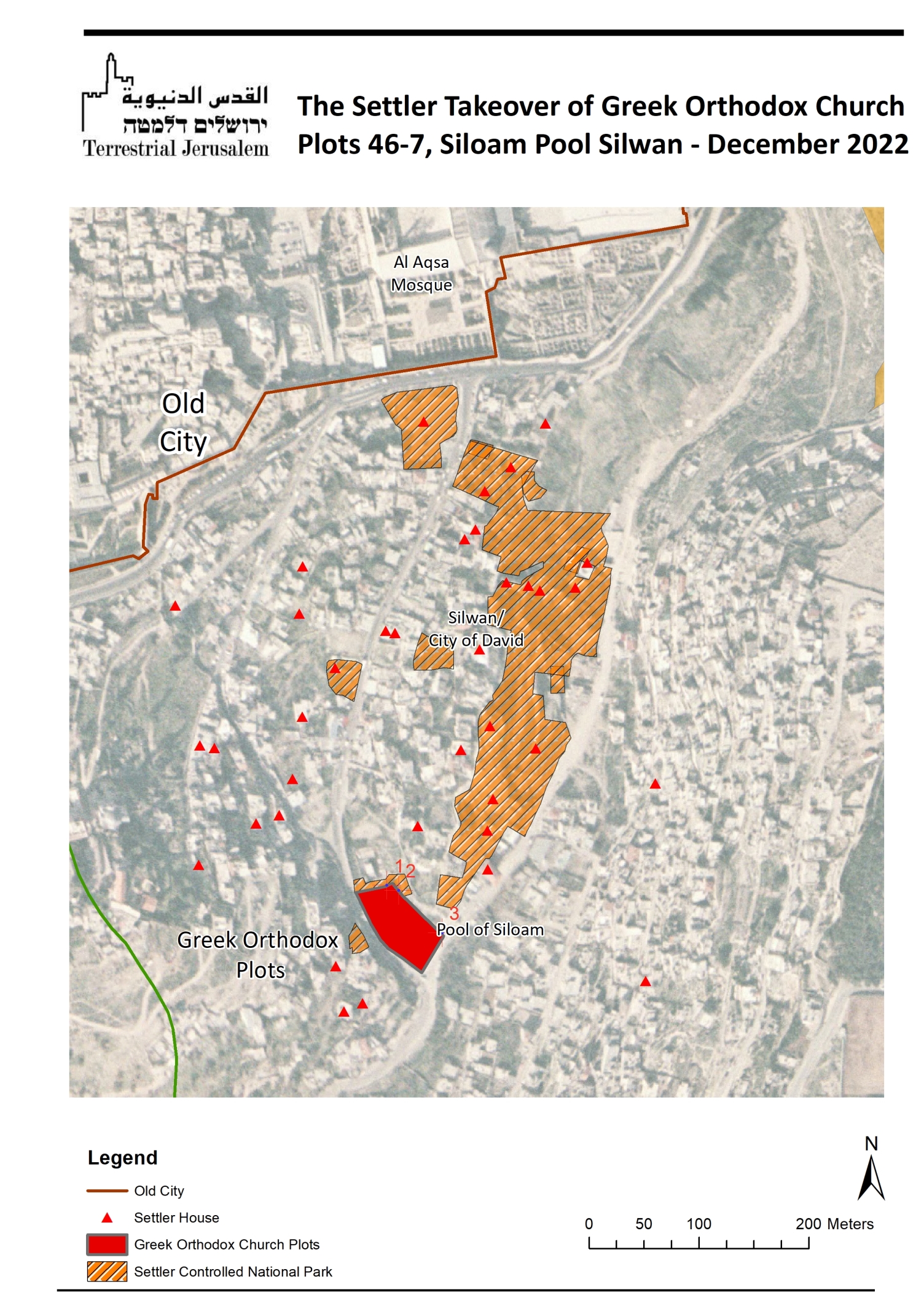 Daniel Seideman – Founder & Director of the Israeli NGO Terrestrial Jerusalem – reports that the Elad settler group is moving to take control over a large tract of land in Silwan, strategically located at the foot of Wadi Hilweh/Silwan/City of David next to the Pool of Siloam.

“This is no routine matter. This is a large tract of land, immediately adjacent to the Siloam Pool, which is of great historical significance to both Jews and Christians. For the former, it is a clear manifestation of Biblical Jerusalem. This in no isolated development and is part of the acceleration of Biblically motivated settlements and settlement-related projects encircling the Old City of Jerusalem. It is reminiscent of another site of importance to the Churches – the sacred sites on the Mount of Olives, which are to be subjected to the growing settler predominance in the public domain, by means of the establishment of an Israeli National Park on the Mount of Olives. This has all the marking of a serious step towards the encirclement of the Old City with settlement enterprises, and a serious crisis between Israel and the Churches. This is not going away.”

According to Elad, the land in question was acquired in the framework of a 2004 transaction in which the Greek Orthodox Church sold the Little Petra Hotel and the Imperial Hotel – both highly prized properties in the Old City of Jerusalem – to the Ateret Cohanim settler organization. The Church leadership has since fought against Ateret Cohanim’s possession of the hotels, alleging the sale was fraudulent, but Israeli courts have ruled in favor of the settlers.

Israeli settlers appear to have begun renovations of the Little Petra Hotel inside the Old City of Jerusalem. The hotel – which is located at at the entrance of the Christian Quarter in the Old City of Jerusalem – came under the control of the Ateret Cohanim settlement organization through the highly contested and controversial sale of the building to the settler group by the Greek Orthodox Church. The Church alleges the deal was fraudulent and has fought to have the sale canceled by Israeli courts. To date, courts have upheld the sale of the hotel to Ateret Cohanim.

Pictures of the new renovations are alarming Palestinians, with the Palestinian Centre for Human Rights asserting that an internal and archaeologically significant wall has been destroyed. An official with the Israeli Antiquities Authority was pictured at the site during the renovations.

Settlers took over the first floor of the Little Petra Hotel in March 2022 but the legal battle over the properties dates back to 2004, when the Greek Orthodox Patriarchate agreed to sell three properties in the Old City to a foreign real estate company under three separate contracts. It did so not knowing that the radical settler group Ateret Cohanim was behind the transaction. News of the sales made headlines in early 2005.

Upon the revelation that Ateret Cohanim was the real buyer, the Greek Orthodox Patriarchate was deeply embarrassed and immediately sought to retain control of the properties. The Patriarchate alleged that the transactions involved corruption and bribery, arguing that the legal documents had been signed without permission by a finance employee. Dismissing the church’s arguments, in June 2020 the Supreme Court upheld prior rulings that the signatures on the legal documents were valid, with the finance employee acting as a legal proxy of the Patriarchate.

New details have emerged on the massive power Netanyahu is transferring to extreme-right politician Bezalel Smotrich in the new coalition agreement.

As reported previously, Smotrich will become the Finance Minister and will also gain the authority to appoint a deputy ministry in the Defense Ministry who will be in charge of a newly created portfolio dubbed “Jewish settlement and open land.” Reports suggest Smotrich will appoint himself to this role, granting him control of both COGAT and the “Civil Administration,” [the arm of the Defense Ministry that operates, in effect, as the sovereign power over the West Bank] — giving him near total control over the civil affairs of Palestinians and Israeli settlers in the West Bank. In particular – as ACRI and Peace Now warn – Smotrich, who has for years sought to disband the Civil Administration and bring settlements under direct Israeli law, will move to quickly grant retroactive legalization to all illegal outposts, increase enforcement against “illegal” Palestianian construction in Area C [as a reminder, Palestinians wishing to build on their own land in Area C are virtually always refused Israeli permits to do, rendering virtually all Palestinian construction in Area C “illegal” according to Israel law], and promote massive settlement growth — all in an effort to effect the de facto annexation of Area C.

Smotrich, in a new interview, spoke about his plans – saying:

“Today there are half a million people who live in Judea and Samaria, vote for the Knesset, serve in the army and pay taxes – but [are governed by] the army like in a Banana Republic. This does not make sense. The idea is that responsibility for the residents of Judea and Samaria should be returned to the government ministries…it is necessary to correct this distorted reality, which today manifests itself in planning and construction, in transportation, in the quality of the environment, and in infrastructure. When the Civil Administration was established, it was expressly determined that it would not deal at all with the Jewish residents of Judea and Samaria. The Oslo Accords stipulated that it was to be dissolved. This is a distortion that harms the public, harms the army, harms [national] consensus and it needs to be fixed. Our minister in the Ministry of Defense will have all the civilian powers over Judea and Samaria.”

In addition, the text of the coalition deal, published this week, reveals that Netanyahu has conceded further legal authority to Smotrich (or Smotrich’s appointee, should he not name himself to the deputy ministerial role in the Defense Ministry). Haaretz reports that in addition to effectively running COGAT and the Civil Administration, this deputy minister will also have approval power over legal cases within the Defense Ministry — a move which sidelines the military’s advocate general who has historically advised the Defense Minister on legal issues and formulated the State’s response to legal petitions related to Israeli actions in the West Bank. +972 Magazine explains:

“While the military advocate general has been hardly effective in protecting Palestinian land rights in the West Bank, it at least concedes formally that its actions are subject to the laws of belligerent occupation, which provide for the protection of Palestinians under international humanitarian law. In all likelihood, Smotrich’s lawyers will not concede even that. Third, Smotrich will have the power to authorize any legal position submitted to the Supreme Court in response to a petition relating to these issues. This would mean, for instance, that it is highly unlikely that the state will ever concede to the Court that land is privately owned by Palestinians, making it even harder for Palestinians to fight for their cases in an already hostile legal environment…With Smotrich in charge of the Civil Administration, and Ben Gvir in charge of the police forces, the stage is set for a de facto entity in the West Bank controlled by two rampant anti-Palestinian fundamentalists. As such, Palestinians are in clear and imminent danger, even beyond the dire circumstances already at hand. The human rights situation in the West Bank has long been horrific and rapidly deteriorating, but now, we are hurtling into uncharted territories.”

A full look at the cabinet Netanyahu is assembling is available here.