Israeli Defense Minister Avigdor Liberman raised eyebrows late last week with a wide-ranging English language interview with the Times of Israel. When asked if Israel is “coordinating its [settlement] building starts with the United States,” Liberman casually responded, “of course.” Though headlines ran with his confirmation of coordination, it should be noted that when Liberman was pushed to give a more concrete picture of what that coordination entails, he said that Israel and the U.S. do not coordinate on “every 10 houses” but that the U.S. generally respects Israel’s approach and vision for “Jewish settlements in Judea and Samaria.”

That respect was put to the test this week as President Trump’s chief Middle East envoys – Jared Kushner and Jason Greenblatt – visited Israel and Palestine to “to continue the discussion about the possibility of peace.” Kushner’s arrival coincided with the commencement of construction of the first official new settlement in 25 years; the coincidence maintained a long tradition of greeting U.S. envoys with new settlement construction, dating back to the early 1990s and the era of Secretary of State James Baker, whose every visit to Israel was seemingly marked by the establishment of expansion of new settlements.

The Trump administration indicated it won’t object to this new settlement, sometimes referred to as the “Amona exception” (i.e., the rule is still that Israel doesn’t establish new settlements, but Amichai is a one-time exception, as a pay-off to settlers who illegally established the Amona outpost on privately owned Palestinian land and were forcibly evacuated earlier this year). But the timing, which may be entirely coincidental, is nonetheless politically provocative. While Kushner was en route, the State Department reiterated the only policy it has communicated publicly on the issue, saying “unrestrained settlement activity is not helpful to the peace process.” The Palestinian Authority also issued a statement on the timing of the new settlement’s ground-breaking, saying that it shows “Israel is not interested in the U.S. efforts, and is serious about thwarting them as it has with previous U.S. administrations.”

On June 22nd, the Israeli NGO Yesh Din filed a petition, together with residents of the Palestinian village of Jalud, to Israel’s High Court of Justice (equivalent to the U.S. Supreme Court) challenging the establishment of the new settlement of Amichai and demanding transparency in the process of demarcating land for settlement. According to the petition, the jurisdiction granted to the new settlement includes enclaves of privately-owned Palestinian land. 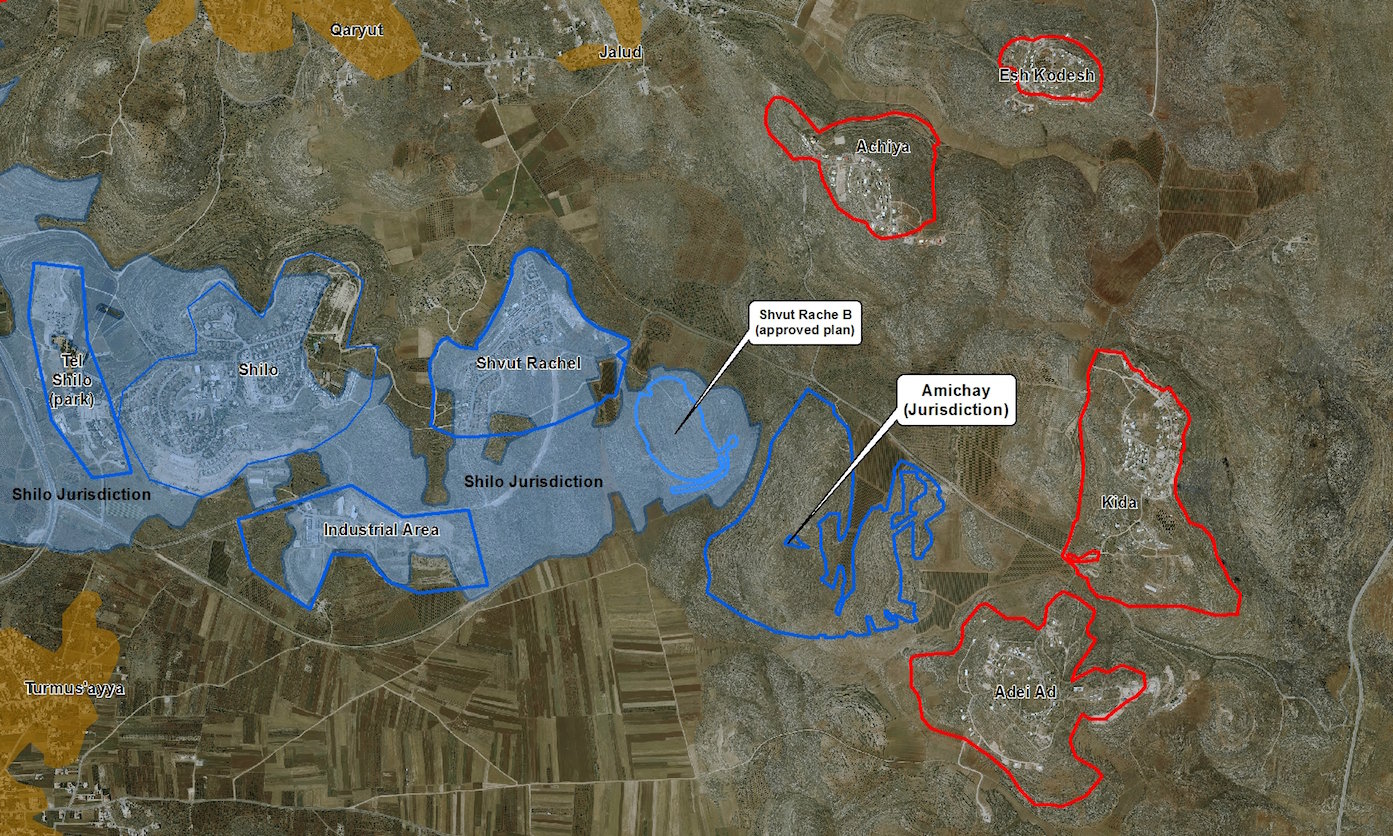 But Amichai isn’t the only construction happening near Jalud. Palestinian officials have reported that construction work has also begun on Shvut Rachel East, a new “neighborhood” of the Shilo settlement (in fact, not a neighborhood but rather a new settlement, as explained by Peace Now). Shvut Rachel East was the original Amona pay-off plan, but Amona evacuees held out for a different plan on a different hilltop – and they got it with the approval of Amichai, to be built  literally adjacent to Shvut Rachel East. But what the world might have assumed would be a choice of “this site or that site” became, instead, a jackpot for settlers of “this site AND that site,” and the Shvut Rachel East neighborhood plan was also approved. Meaning that rather than paying a price for breaking the law (and then resisting evacuation), the government rewarded Amona settlers with not one but two new settlements – both located deep inside the West Bank, in an area that Israel could not possibly retain in any land swap agreement, and, both at the expense of Palestinians residing in the area around the settlement of Shilo. And meaning that the government of Israel is, through this policy, continuing to actively incite and incentivize settler law-breaking.

On June 21st – the very day Trump envoy Jared Kushner arrived in Israel and was meeting with Netanyahu – news broke that Netanyahu was lifting his alleged hold on plans for the construction of 5,000 of new settlement units in East Jerusalem. This news comes on the heels of a June 19th report by Israel’s Army Radio that it had seen secret government documents showing that Prime Minister Netanyahu had imposed a building freeze in East Jerusalem settlements over the past few years. The documents – which were not released by Army Radio – allegedly identify specific projects totalling 6,000 units in Gilo, Pisgat Zeev, and Har Homa, that Netanyahu reportedly froze under intense pressure from the Obama administration. The 5,000 units for which Netanyahu has now reportedly given a green light are part of these 6,000 units, although there are few additional details thus far. Jerusalem Online suggests that some of the units are part of plans that were previously but have expired and need re-approval, and that the Jerusalem local planning committee will convene in short order to re-approve these plans.

It’s worth revisiting the dangerous East Jerusalem construction roller coaster ride of 2017. In January, Netanyahu announced, “I’ve decided to remove the political limitations on construction in East Jerusalem.” The worst was feared, including implementation of Givat Hamatos and/or E1, either of which would have devastating impact on the viability of the two-state solution. Nothing happened until April when rumors frantically swirled suggesting Netanyahu was planning a 15,000-unit construction surge in East Jerusalem. The formal announcement was expected to coincide with Jerusalem Day – and President Trump’s first visit – in May, but nothing was announced. A short time later, on June 6th, the Civil Administration’s High Planning Council advanced 603 units for the massive settlement of Maale Adumim, located just across the Green Line on the northeast border of East Jerusalem.

Coordination? Test #3: 70% Rise in Settlement Construction Starts Over Past Year

Netanyahu has recently declared, “There hasn’t been and won’t be a government that’s better for settlements than our government.” He isn’t kidding. Data released by the Israeli Central Bureau of Statistics (ICBS), and analyzed by Peace Now, documents a huge surge in settlement construction over the past year. Specifically, the official data shows that the number of construction starts in settlements from April 2016 to March 2017 was 70% higher than the previous 12-month period. And these numbers may still not tell the whole story: Peace Now warns that the ICBS is still counting starts for January-March 2017 (as currently reported in the ICBS data, the number for that period is actually lower than the same period for 2016). In addition, Peace Now has documented an 85% increase in the number of plans promoted so far in 2017. If these plans continue to advance, an additional surge in construction starts is likely. 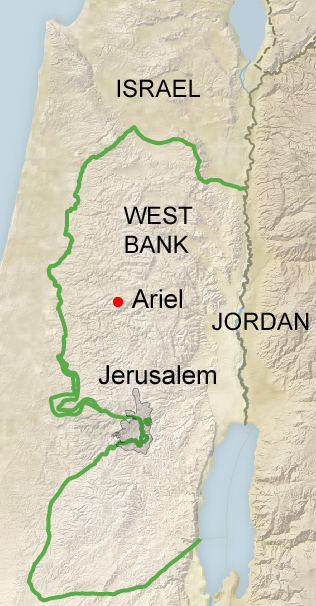 Israeli Education Minister Naftali Bennett presented a plan to the Knesset that will double the size of “Ariel University,” an Israeli institution of higher education located in the settlement of Ariel settlement. The centerpiece of Bennett’s plan, which will be implemented over the next five years, is a medical center to be named for Sheldon Adelson, who is a major American settlement financier. Adelson is said to be contributing $20 million to the medical school, making good on a commitment made in 2014. The plans still need to secure addition approvals before proceeding.

Ariel is located in the heart of the northern West Bank, reaching literally to the midpoint between the Green Line and the Jordan border. The future of Ariel has long been one of the greatest challenges to any possible peace agreement, since any plan to attach Ariel to Israel will cut the northern West Bank into pieces. Ariel University became an accredited Israeli university in 2012, following significant controversy and opposition, including from Israeli academics. It has since been the focus of additional controversy, linked to what is a clear Israeli-government-backed agenda of exploiting academia to normalize settlements.

Earlier this month, the IDF evacuated dozens of radical Israeli settlers from the illegal “Baladim” outpost in the Jordan Valley. Baladim was the most notorious and established outpost in the region, a frequent source of terror for Palestinians and the Israeli army alike. The radical “Hilltop Youth” that camp-out in Baladim have been evacuated dozens of times before, but each time the they return to live illegally in the area.

According to a Haartez report, this time the IDF approached the leaders of the radical settlement of Yitzhar – from which many of Baladim radicals hail – before the outpost’s evacuation. The IDF reportedly warn them about the likely influx of Hilltop Youth to Yitzhar following the evacuation.

The interplay between Yitzhar and the Hilltop Youth is one to watch, particularly after an attack this week on Israeli Army vehicles at Yitzhar’s gate. The settlement’s leaders are claiming that the Hilltop Youth are responsible for perpetrating the attack. Haaretz writes, “Yitzhar is considered an ideological focal point of the radical settler right, yet a large number of residents who spoke to Haaretz condemned the recent stone throwing and the extremist ideology of the Baladim settlers.” Shin Bet officials reportedly met with Yitzhar leaders this week to push them to do more to “calm” the young, violent, and extremely problematic radicals. Yitzhar settlers might be trying to distance themselves from the Baladim (which is problematic given that the Hilltop Youth who have fought for Baladim are from Yitzhar), as the Shin Bet has been more aggressively moving against members of the “Hilltop Youth”, which we covered in last week’s settlement report.