Ir Amim announced that, after exhausting every avenue for administrative remedy, it will likely proceed with a civil lawsuit in light of the State’s move last month to proceed with the construction of a “Yemenite Jewish Culture Center” in the Batan al-Hawa section of Silwan, despite two pending legal petitions against the project. 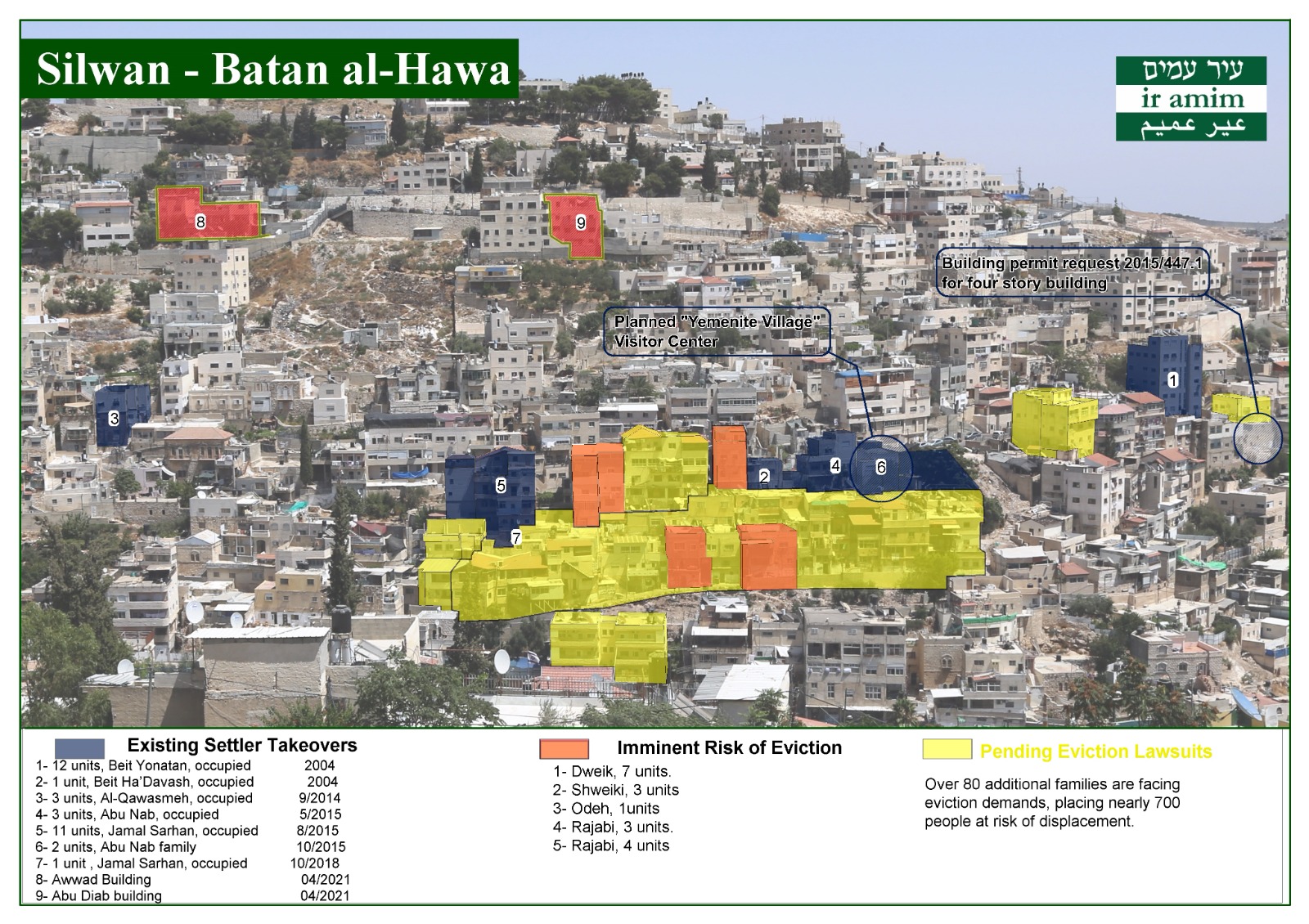 Last month (July 2022), the Israeli government announced that the Jerusalem District Court had accepted a plan that would allow the project to move forward. That plan would see the building at the center of the dispute to be leased to a new company, which would establish and manage the cultural center. Hatched in secret by senior government officials and a body known as the Benvenisti Trust (which is at the center of the two pending legal petitions), the plan creates the appearance that the Benvenisti Trust is no longer directly involved in the project — but Ir Amim reports that there is reason to believe that this new company is an affiliate or subsidiary of Ateret Cohanim, the settler body that controls the Benvenisti Trust.

As a reminder, the two legal petitions filed by Ir Amim and residents of Batan al-Hawa against the project are:

Ir Amim explains that, in response to the State’s new plan, it has requested an update on its petitions. Describing a letter it recently sent to the the Ministry of Justice (which was supposed to have launched an investigation into the allegations) Ir Amim provided the following update:

“Ir Amim called again for suspension of the project, stating numerous arguments, including the fact that announcement of such an initiative by Ministers Elkin and Sa’ar (the new State Camp Party) during a transitional government constitutes “campaign advertising” and therefore violates election campaign regulations. Moreover, the letter emphasized that leasing the property to “some other organization” for the establishment of a tourist site still violates the trust’s charter and designated purpose of the property, which is for residential use only. In light of the conduct of the trustees’ (i.e. Ateret Cohanim) and state authorities’ to date, there is reason to believe that this purported organization is a subsidiary or affiliate of Ateret Cohanim.

As the letter states, “if this is indeed the case, this is yet further decisive proof that the Benvenisti Trust is clearly being harnessed for the purposes of Ateret Cohanim and its affiliated bodies. This is another layer of a serious conflict of interest in the trustees’ activity to the point of attempting to alter its official goals, which the Registrar of Trusts considered not in accordance with the law and the opinion of the original grantor. It likewise evades the obligation to comply with the grantor’s instructions concerning the trust’s assets through creating a measure to try and underhandedly circumvent these barriers.” As such, Ir Amim demands the complete suspension of the project and an immediate freeze on the state’s allocation of public funds.”

In its monthly report, OCHA reports that the month of June saw a 48% spike in the number of Palestinian-owned structures demolished or seized by Israel. Recall that this spike comes against the backdrop of settlers’ ongoing campaign to push the Israeli government to more expansively and expeditiously destroy Palestinian buildings in Area C. Four of the structures demolished by Israel in June were demolished within 96 hours of their discovery, under an expedited process Israel formulated and implemented, by fiat, via a military order (Military Order 1797).

Meanwhile, Haaretz reports that an American Evangelical Christian group calling itself “Hayovel” has undertaken a tree-planting campaign on privately-owned Palestinian land in Area C. The group,  a U.S. 501(c)(3) nonprofit organization whose mission is to support “Israel’s right to exist in their biblical heart”, is charging donors $25 per tree, and has begun planting trees near the Har Bracha settlement in the central West Bank, south of Nablus. According to Dror Etkes – founder of the settlement watchdog group Kerem Navot – over 90% of the land in the area where the trees are being planted is owned by Palestinians from the nearby town of Burin. The land was once richly cultivated by its Palestinian owners, but has been left fallow for years because the Israeli military and settlers have prevented Palestinians from accessing the area. The American group’s stated objective is to plant 3,000 new trees in the West Bank by the end of 2022, and then 20,000 trees every year following.

When asked about the land on which the trees are planted, Hayovel asserted that it was given permission by several Israeli authorities, telling Haaretz:

“We do not own any of the land where we plant trees. We work closely with individual farmers, local Jewish communities, and local municipality governments. Most of the Greening Israel Project forestry sites are located on land owned and controlled by the State of Israel.”

Arutz Sheva reports that the IDF is preparing to increase its protection for settlers who regularly visit Joseph’s Tomb, located inside the Palestinian city of Nablus, near the Balata refugee camp. Settlers regularly visit the religious site, escorted by the IDF, which regularly results in clashes with Palestinians.

“The entire story of Joseph’s Tomb is one big mistake. This is a huge operation of bringing people, transportation and other events around the prayers…There are parties who earn a lot of money there and there are many political interests. We have to stop endangering soldiers. Every entry into the site causes friction and it’s only a matter of time until a disaster happens there.”