At approximately 3:00am on Wednesday, January 19th Israeli forces undertook a major operation in order to forcibly remove the Salhiya family from their longtime home in Sheikh Jarrah — rendering 7 adults and 5 children homeless in the middle of the night in the freezing rain. Israeli forced then moved to promptly demolish the home. The action followed Israel’s aborted two days earlier, on January 17th, to remove the family, during which it razed part of the Salhiya family plot, including a plant nursery.

As a reminder, Israel pursued this dispossession after unilaterally expropriating the plot of land owned by the Salhiya family in 2017 for “public use.” Israeli authorities say that they intend to use the land to build schools to serve Palestinians, who have long suffered from a shortage of school facilities. As has been noted, this argument is hard to take seriously, given that land exists elsewhere in Sheikh Jarrah on which schools could be built without evicting and rendering an entire Palestinian family. Ir Amim explains:

“Although Israeli law allows for the expropriation of private property for public purposes, it is typically only carried out in the absence of alternative options. The authorities have had various options at their disposal, including use of other plots of open land in the neighborhood, which would not have necessitated the Salahiya family’s eviction. Rather than using such plots, the municipality saw it reasonable to dispossess a Palestinian family to meet such needs.”

In order to carry out this forcible dispossession, Israel forces first cut power to the entire (Palestinian) area in which the Salhiya house and businesses were located. Accounts from those present at the eviction/demolition reported that Israeli forces violently assaulted several members of the Salhiya family including children. Israeli forces also arrested eighteen human rights defenders – including members of the Salhiya family — for resisting the eviction (for a detailed update on these cases, please see this report by Human Rights Defenders Fund). An additional six human rights defenders were arrested later on January 19th during a protest  against the demolition, held in front of the Jerusalem Mayor’s home. Human Rights Defenders Fund, which is funding the legal representation of those arrested, said:

The overnight evictions have been roundly criticized by human rights groups and several international governments. The European Union slammed the eviction/demolition, along with separate statements issued by individual European nations. The United States Ambassador to the United Nations, Linda Thomas-Greenfield also spoke out (weakly, in a statement framed in classic bothsides-isms). 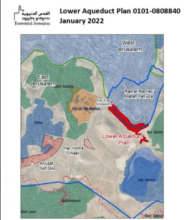 On January 17th, the Jerusalem District Planning Committee approved for deposit for public review a new settlement plan in East Jerusalem – called the “Lower Aqueduct” plan. The new settlement is intended to connect the controversial settlements of Givat Hamatos and Har Homa, establishing an uninterrupted continuum of Israeli settlements on the southern rim of Jerusalem, and destroying the contiguity of Palestinian land in the West Bank and East Jerusalem.

As laid out in new reporting from Terrestrial Jerusalem, the plan is being promoted by the Jerusalem Municipality together with the Israel Lands Authority, but – as the reporting predicts –

“when the smoke clears, it will become evident that the same protagonists that are facilitating settlements in Sheikh Jarrah, Silwan, Givat Shaked, Musrara – i.e. the Custodian General and the Absentee Property Custodian – are deeply implicated in the Plan.”

Terrestrial Jerusalem further notes that the plan is being advanced at an expedited pace, giving the appearance that “someone senior and in a position of authority is expediting the Plan at [a] highly irregular pace.”

In total, the plan provides for the construction of 1,465 new units – around half of which will be constructed over the 1967 Green Line the demarcates (in the eyes of the international community) the line between Israeli-annexed West Jerusalem and Israeli-occupied East Jerusalem. The plan also provides for open public spaces and buildings including schools and a gymnasium.

“This is another way in which Israel is erasing the Green Line in Jerusalem, ending Palestinian contiguity, and expropriating the lands of Palestinians. When Palestinians tried to plan construction there, it was rejected — and now the territory will be confiscated.”

Following the committee’s decision to this week to advance the plan, the European Union, France, Germany, Spain and Italy all issued statements calling for Israel to reverse the move. France also published a joint statement with Ireland and Estonia.

Settlers Continue To Press For “Legalization” of Homesh Outpost & Yeshiva

In a display of brazen lawlessness, more than 1,200 Israeli Jews managed to enter the closed military zone that is the site of the former Homesh settlement – where settlers have illegally established and operated a yeshiva for years – in order to celebrate the Jewish holiday of Tu B’Shvat, as part of their ongoing campaign to pressure the government to reestablish the settlement.

To reach the site, settlers (identified as yeshiva students by The Jewish Press) marched en masse for two hours with armed guards through the outskirts of the Palestinian village of Sebastia. On their way, settlers passed easily through at least two IDF checkpoints — meant to stop traffic towards the Homesh area, though Israeli soldiers in practice prevented only the freedom of Palestinian traffic in that direction. Sebastia is a routinely besieged city, suffering closures in the wake of the murder of settler Yehuda Dimentan and as a consequence of Israeli settler’s focus on archaeological sites in the city [as has been covered in the Settlement Report regularly: settlers, in collaboration with Israeli authorities, are openly seeking to exploit archeology as a tool to dispossess Palestinians in the West Bank].

In Jerusalem, settler leaders and their allies continued their mass protest in front of the Prime Minister’s residence in a bid to pressure Bennett to authorize Homesh, amongst other demands.

In an interview with the Yedioth Ahronoth news outlet, U.S. Ambassador Thomas Nides said that he will not visit Israeli settlements in the West Bank, unlike his immediate predecessor David Friedman.

When questioned about his travel policy as compared to Friedman’s, Nides said:

“Because just like I ask both the Palestinians and Israelis not to take steps that inflame the situation, I don’t want to do things intentionally that would create disrespect or anger among people. Now, listen, I’ll make mistakes. I’ll say things that will aggravate people. I’m sure that in this interview, I’ll say something that will aggravate someone. But I don’t want to intentionally anger people.”

It’s worth recalling that the Biden Administration has not reversed or publicly rejected the Trump Administration’s “Pompeo Doctrine,” which made it U.S. policy to view Israeli settlements as not “per se inconsistent with international law.” The overwhelming majority of the international community holds that all Israeli settlements and outposts in the West Bank are illegal pursuant to Article 49 of the Fourth Geneva Convention, which states:

“The Occupying Power shall not deport or transfer parts of its own civilian population into the territory it occupies.” It also prohibits the “individual or mass forcible transfers, as well as deportations of protected persons from occupied territory”.