SHAMELESS PLUG: On 1/29/21 FMEP hosted a webinar focusing on settlement construction in East Jerusalem. The talk featured Zena Agha (Middle East Institute), Daniel Seidemann (Terrestrial Jerusalem) and was moderated by Kristin McCarthy – the author of this settlement report. You can find a recording of the webinar and a list of resources online here. 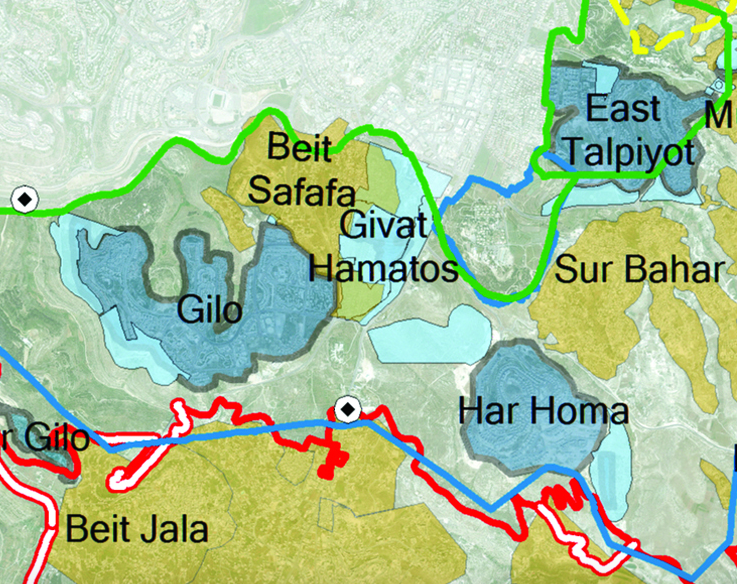 Ir Amim reports that Israeli authorities quietly expedited the planning process for the new Har Homa E settlement in East Jerusalem by depositing the plan for public review on December 4, 2020 – just 11 days after the plan was approved for deposit. The sixty day period for public commenting is set to close next week, on February 4th, after which Ir Amim expects the Jerusalem planning authorities to move quickly to hold a final hearing on the plan in the next few weeks.

“While presented as an extension to the existing neighborhood/settlement of Har Homa, the plan will rather establish an entirely new residential area in between Har Homa and Givat Hamatos. This new residential location would be built along the northwestern edge, just 400 meters from the area in Givat Hamatos designated for the planned 1257 housing units. The plan’s deposit for objections occurred just 11 days after the District Planning Committee approved the plan for deposit on November 23.”

On the importance of the plan, Ir Amim writes:

“The swift promotion of this plan along with the Givat Hamatos tender is indicative of the Israeli government’s intent to continue to fast-track as many settlement construction projects as possible in East Jerusalem and its vicinity even after the change in the US administration last week. Along with Givat Hamatos, construction in Har Homa E will serve as another step in linking the existing Har Homa and Gilo neighborhoods/settlements to create an Israeli sealing-off effect along the southern perimeter of East Jerusalem. This will fracture Bethlehem and the southern West Bank from East Jerusalem, while isolating the Palestinian neighborhood of Beit Safafa and depleting the remaining land reserves for further development of the neighborhood. If carried out, these measures will constitute a major obstacle towards the future establishment of a contiguous independent Palestinian state with a capital in East Jerusalem.”

Despite the apparent correlation between the Trump presidency and settler population growth, one of the report’s authors was dismissive of the idea that settler population trends are directly linked to the policies of any U.S. president, saying:

“I don’t think any American president can influence that much, because growth on the ground is (dependent on) internal Israeli government decisions on how much construction to do and not to do…The facts on the ground are stronger than any American foreign policy.”

Peace Now disagrees, having previously described (in a November 2020 report) the legacy of the Trump Administration on Israeli settlements and annexation:

“Israel’s policy in the West Bank is determined by the Israeli government, yet the United States’ influence on this policy is paramount. In President Donald J. Trump’s four years in office, there have been far-reaching changes in the American position on Israeli settlements that have shattered the international consensus around a two-state solution, and which have promoted annexation in all but name. The de facto annexation has manifested itself in high levels of settlement unit approvals, transgressions of informal international red lines in highly sensitive areas like the Jerusalem environs and Hebron, and the building of over 30 new outposts. Consequently, de jure annexation became a legitimate topic in the Israeli and American governments, while Israel has created for itself and the Palestinians a near permanent, undemocratic one-state reality…The Trump administration lent the power of the United States to the benefit of the narrow interests of a small, radical group of settlers, and has done enormous damage to Israel. We expect the incoming administration of President-Elect Biden to be attentive to the peace-seeking majority in Israel and to restore the United States to its status as a constructive intermediary for a two-state solution.”