In the first days of the new year, the Israeli Civil Administration began demolishing Palestinian homes and buildings in the Masafer Yatta region of the South Hebron Hills, an undertaking that won the approval of the Israeli High Court following a two-decade-long legal battle. The area of Masafer Yatta  is currently home to 1,000 residents (500 of which are children) in eight villages. 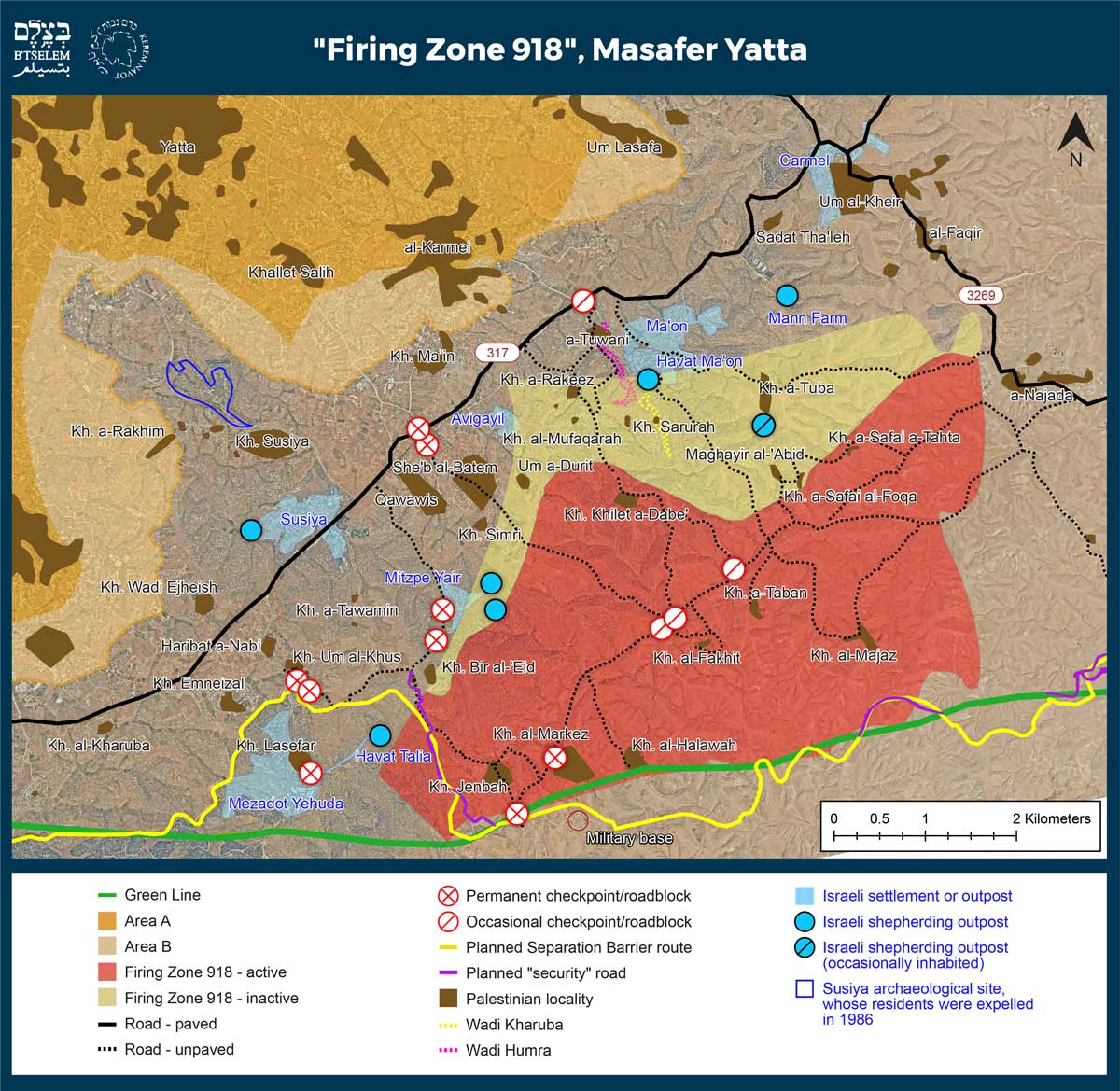 As a reminder: Israel designated the area as a firing zone in the early 1980s for the express purpose of enabling the State to clear out Palestinians who live there, in direct contradiction to a 1967 IDF legal opinion stating, among other things, “Civilians cannot be evacuated from an area in order to create training zones for the IDF, both for political and humanitarian reasons, and for reasons related to the provisions of international law.”

On January 2nd, the Israeli government announced that residents of Masafer Yatta will soon receive notices requiring them to vacate the area, further saying that the residents will be expelled to an alternative location where the State will allow them to live. In response, B’Tselem  observed:

“forcible transfer of protected persons in occupied territory is a war crime, therefore, the Israeli offer of an alternative is meaningless and a violent threat that leaves the residents with no choice.”

Shortly following that announcement – on January 3-4 – Israeli forces were documented demolishing and removing Palestinian homes, structures, and olive groves in Masafer Yatta, even confiscating a tent that was used as a makeshift school.

For more information on Masafer Yatta, please check out the following resources:

On December 27th, 2022 — days after Christmas and while most of the world was on holiday — Elad settlers, accompanied by a heavily armed detail of Israeli police, took control of a plot of land immediately adjacent to the Pool of Siloam in the Silwan neighborhood of East Jerusalem. The Pool of Siloam is an important historic site and a sacred Christian site, believed to be the site where Jesus healed the blind.

In a press release celebrating the seizure and the start of excavations – ostensibly aimed at revealing the entirety of the Pool of Siloam — the project was presented as a joint endeavor of the Elad settlers, the Israel National Parks Authority (INPA), and the Israel Antiquities Authority (IAA). Terrestrial Jerusalem characterized this joint action as “further evidence that in Silwan, the settlers and the Government of Israel are one of the same.”

According to reports, the newly-seized plot of land is owned by the Greek Orthodox Church, which leased it to Palestinian Sumarin family in 1931. The land has been used by the Sumarin family for agricultural purposes ever since. With this very public move to take control over the plot, the world learned for the first time that this land is part of the Greek Orthodox Church’s contested and controversial 2004 sale of some of its most prized assets to settler entity Ateret Cohanim (a sale that includes the Petra and New Imperial hotels in the Old City — see previous editions of this report for details on those cases). It remains unknown if there are additional properties involved in that transaction.

“The Government of Israel and the settlers have decided there is no better time to take over Church property, in a place of cardinal importance to Christianity, than the Christmas week. There is nothing new in this. The settlers and the Government customarily reserve Christmas week for their most problematic initiatives, assuming, not without reason, that the diplomats and decision-makers are all on leave and will not pay attention.”

Emek Shaveh said in response to the takeover:

“The synchronicity of the raid and statement demonstrate the seamless partnership that has evolved between the settlers, the Antiquities Authority and the Nature and Parks Authority in recent years. Now, with a new government that intentionally disavows obligations under international law and disparages democratic norms, the authorities in charge of protecting heritage sites – already thoroughly politicized  –  will be further challenged to maintain their professional backbone.”

“Silwan is nestled beneath the southern ramparts of the Old City. Rich in history, Silwan is the small geographical location where the tectonic plates of Judaism Christianity, and Islam meet. Silwan is a contemporary Palestinian neighborhood in East Jerusalem. Beneath part of Silwan, Wadi Hilweh, lies the biblical City of David. Since 1991, Silwan has been the most controversial and hotly-disputed settlement in East Jerusalem. Fully backed by the Government of Israel. Extreme biblically-motivated settlers aspire to transform Silwan into a renewed manifestation of ancient Biblical Jerusalem. Evictions, displacement, archeology, national parks, demolitions, detentions, etc. have all been weapons in the arsenal of the settlers in pursuing their radical transformation of the character of Silwan. The Pool of Siloam is now the epicenter of this conflict For more background on Silwan, see our recent study.

“…The takeover of the Siloam Pool is not taking place in isolation, and its significance even goes beyond its role in the settler attempt to takeover Silwan. In recent months, we have revealed the implementation of an Israeli Government Plan which entails encircling  the Old City with settlements and settler-related projects (like the Pool of Siloam  excavations). This plan, not only fragments Palestinian East Jerusalem, it marginalizes the Christian and Muslim presence in the Old City and its environs. We are witnessing the incorporation of the historic, religious and cultural core of Jerusalem into a biblically  interpreted Israel under the de facto authority of East Jerusalem. This is not just another bad thing” or “unhelpful unilateral step”. We are witnessing a radical transformation of the very character of Jerusalem, in ways not seen before. The evictions and demolitions in Silwan and Sheikh Jarrah, the cable car, the National Park on the Mount of Olives (see our recent report), the creation of an Israeli night spot in the Christian Quarter are  intimately related: they are parts of a puzzle that disclose this unprecedented encirclement of the Old City. The takeover of the Siloam Pool is another part of that puzzle.”

Please also listen to Terrestrial Jerusalem’s latest podcast episode for a discussion of this case.

On January 2, 2023 the Israeli High Court gave the new Israeli government 90 days to submit its position on the court-ordered evacuation of the illegal yeshiva located at the site of the dismantled settlement of Homesh in the northern West Bank. The Court’s order represents a first opportunity (and challenge) for Israel’s new governing coalition to move forward with its stated intention to re-establish Homesh.

To do so, the Israeli government is preparing to amend/repeal the 2005 Disengagement Law. That law not only provided for Israel’s withdrawal and removal of all settlements from Gaza, but also entailed the dismantling of the Homesh settlement, along with three others in the northern West Bank,.

Settlers, who have been pushing to reestablish Homesh for years, are planning their own test of the new government’s plans. The Times of Israel reports that settlers are preparing to spend the night of the first Passover seder (April 5th, which is the day before the Court’s deadline for the State’s response) at the site of Homesh , and are prepared to resist removal should Israeli forces try to make them leave the closed military zone. Settlers are also planning to send 1,000 people to spend that same night in the illegal Evyatar outpost – which the new government has vowed to retroactively legalize. One of the organizers of the initiative told The Times of Israel: “This will be the real test for the new government, in the field…This is no longer coalition deals and statements to the High Court. Thousands of us will return to settlements, legally, knowing we won’t be evacuated anymore.”

The U.S. State Department spoke out against the possible reestablishment of Homesh. Ned Price, the spokesman, said:

“The Homesh outpost in the West Bank is illegal. It is illegal even under Israeli law. Our call to refrain from unilateral steps certainly includes any decision to create a new settlement, to legalize outposts or allowing building of any kind deep in the West Bank, adjacent to Palestinian communities or on private Palestinian land,”

On 31st December 2022, the United Nations General Assembly (UNGA) adopted a resolution calling on the International Court of Justice (ICJ) to examine the legal implications of Israel’s ongoing violation of the right of the Palestinian people to self-determination, its 55-year-long occupation, settlement, and annexation of the Palestinian territory occupied since 1967—including measures aimed at altering the demographic composition, character, and status of Jerusalem, and from its adoption of related discriminatory legislation and measures­.

In response, one Israeli lawmaker –  Zvika Fogel of the Otzma Yehudit party, which is part of the governing coalition – confirmed the nature of Israel’s occupation and reiterated his own hopes that Israel will annex the West Bank, saying he “cannot argue with the facts. As of right now, the occupation is permanent. And as of right now I would like to continue to apply Israeli sovereignty over all the areas that I can.”

Other parts of the Israeli government are waging a more aggressive response to the ICJ and the groups and organizations that have called for the ICJ’s involvement. The Israeli Security Cabinet meeting on January 5th to approve five actions to punish the Palestinian Authority for “waging a diplomatic war” against the state. Those actions – helpfully decoded by FMEP’s Lara Friedman – include placing a moratorium on all Palestinian construction in Area C of the West Bank (60% of West Bank land).

The Palestinian human rights group Al Haq – which has requested the advisory opinion from the ICJ – welcomed UNGA’s vote and said in a statement:

“In a historic plenary vote, the UN General Assembly voted in favour of submitting a question for an Advisory Opinion on the Question of Palestine to the International Court of Justice. Al-Haq extends its deepest appreciation to the 87 Member States who aligned with the calls of the Palestinian people and voted in favour of submitting the question for an Advisory Opinion. It is critical that the avenues of justice and rule of law are opened by Third States for the Palestinian people, who have been systematically disenfranchised and denied their inalienable right to self-determination, as well as subjected to grave breaches of jus cogens norms, which incur erga omnes obligations. The Advisory Opinion offers a critically important opportunity for the International Court of Justice to examine the legality of the occupation regime, which if found in breach of international law, may incur, for the first time, important legal obligations on Third States and the international community, to bring the occupation to an end.”

In voting for the ICJ to issue an advisory opinion, the UN General Assembly has invoked the Court’s consideration of the case without the consent of Israel (one of the involved parties). The resulting opinion is non-binding, but will provide a detailed position on the issue of Israel’s occupation.

In addition to the forthcoming work by the International Court of Justice (ICJ) – which considers cases involving states – the International Criminal Court (ICC) is investigating potential war crimes committed by Israeli individuals in the occupied Palestinian territories. The ICC’s Chief Prosecutor, Karim Khan, has indicated his desire to visit Palestine in 2023. A group of 10 Israeli human rights groups sent a joint letter to Khan’s office voicing their support for such a trip. The letter said:

“It is our position that crimes, indeed, have been and are being committed; that the Court has jurisdiction to investigate and prosecute; and, we are all committed to assisting your office in advancing the ongoing investigation of the Situation in Palestine… Israel has a record of preventing international access to the oPt: U.N. Commissions of Inquiry, Special Rapporteurs, OHCHR staff, international scholars and human rights advocates have all been, over the years, barred entry […].This context makes your visit – and the granting of access to your office – ever more important.”