The E-1 Settlement is Back on the Agenda

The Israeli government has announced that the E-1 settlement plan – long understood to be a “doomsday” settlement by those hoping to achieve a two-state solution – will be discussed by Israel’s West Bank planning authority on August 9th.  Given the highly sensitive nature of the E-1 settlement, the international community has long engaged intensively to dissuade the Israeli government from advancing the plan. 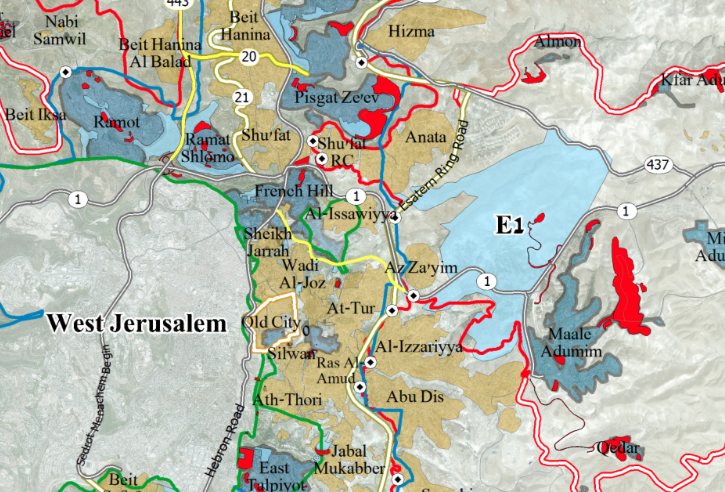 The E-1 settlement is at the planning stage where objections filed by the public against the plan will be heard and discussed by the Israeli High Planning Committee (a body within the Israeli Defense Ministry responsible for regulating construction in the occupied West Bank). Several Israeli NGOs – including Peace Now, Ir Amim, and the Association of Environmental Justice in Israel – jointly filed an objection in August 2020 against the E-1 plan, citing a litany of problems including several dire economic repercussions as well as the inherent inequality and discrimination of planning this community for Israelis. Those objections will be part of what the Planning Committee will discuss if it meets on August 9th. Once all objections have been dealt with (e.g., rejected, or addressed via changes in the plan), the Committee can grant final approval for construction.

In its current form, the E-1 plan provides for the construction of 3,412 new settlement units on an area of land located northeast of Jerusalem. The site is home to several Palestinian bedouin communities, including Khan al-Ahmar, which Israel has already undertaken many attempts to forcibly displace. Long called a “doomsday” settlement by supporters of a two-state solution, construction of the E-1 settlement would sever East Jerusalem from its West Bank hinterland. It would also  cut the West Bank effectively in half,  foreclosing the possibility of drawing a border between Israel and Palestine in a manner which preserves territorial contiguity between the northern and southern parts of the West Bank. Israel’s “answer” to the latter criticism has long been the argument that Palestinians don’t need territorial contiguity, and that new roads can instead provide “transportational continuity.” To this end, Israel has build the “Sovereignty Road” – a sealed road passing through the E-1 area, that is wholly under Israel’s total control (meaning Israel can cut off passage through it at any time). In January 2021, then-PM  Netanyahu promised to increase funding for the Sovereignty Road as part of the drive to get E-1 built.

As a reminder: there have been attempts to promote the E1 plan since the 1990s, but due to wall-to-wall international opposition, the plan was not advanced until 2012, when Netaynuahu ordered it to be approved for depositing. Following an outcry from the international community, the plan again went into a sort of dormancy…until Netanyahu put it back on the agenda in February 2020 when he was facing his third round of elections in the two years. Also, as a reminder: under the Trump Plan (which the Biden Administration has yet to comment on), the area where E-1 is located is slated to become part of Israel.

Commenting on the imminent advancement on the E-1 plan Peace Now said:

“This plan poses a real threat for the chance for peace thus has gained sharp opposition in Israel and internationally. The Bennett Lapid government has glorified itself in turning a new page with the world and the citizens of Israel, but promoting the plan in E1 shows the opposite and will bring us back to the dangerous policies furthered by Netanyahu. The Minister of Defense can and must freeze this plan so that the Israeli interest is safeguarded and a wrong prevented.”

A disagreement between the Jerusalem Municipality and the Israel Land Authority might help activists in cancelling (or at least delaying) the issuance of a tender for the construction of luxury highrise apartment buildings and a hotel on the ruins of the Palestinian neighborhood of Lifta in West Jerusalem. The tender is scheduled to be issued on July 29th. The Municipality says that the tender is being issued without its support, and that the Mayor of Jerusalem, Moshe Leon (Likud) wants to reexamine the plan. Palestinians have been actively protesting and inhabiting the lands of Lifta – as well as preparing a legal challenge to the plan – in an attempt to stop the construction of a new Israel neighborhood that will no doubt be an inhospitable and economically inaccessible place for Palestinian citizens of Israel and Jerusalem ID holders.

Sami Arshid, a lawyer who represented the families of the refugees previously, said:

“At this stage, the battle has been renewed through a request to the Israel Land Authority, the Jerusalem Municipality and the regional planning and building committee with a request to cancel the new tender and to carry out new planning based on the findings of the preservation survey of the Antiquities Authority. At the same time, we demand to act to strengthen the existing structures to prevent the continued collapse of cultural assets. If this request is not honored in the next few days, we will once again be forced to turn to the courts.”

“You don’t need to be an archaeologist to enjoy the history that the remnants of the village of Lifta recount. Generations of Israelis who came to the site in their childhood brought the village back to life in their imaginations, understood how the agricultural and architectural culture of the land looked in the last hundreds of years, and no less than that, gained a deep and direct understanding of the story of the land.”

While FMEP’s settlement and annexation report focuses on settlement building in areas located over the 1967 Green Line, the story of Lifta – and of other Palestinian villages forcibly depopulated by Israeli forces in the 1948 – is another facet of the Israeli government’s policy of erasure of Palestinians via the establishment of Jewish Israeli communities. You can read one Palestinian’s account of forced her forced displacement from Lifta, here.

Likud Submits Annexation Bill for all of West Bank

On July 13, the Likud Party presented a bill for the annexation of the West Bank to the Knesset’s committee on Legislative Affairs, which is slated to hold a first vote on a bill on July 18th. The bill was authored by Likud MK Miki Zohar, who has previously submitted other – more limited – annexation bills, as well as a bill to prevent the government from dismantling any settlements.

Zohar is a fervent supporter of annexation and settlement growth. Zohar has participated in events hosted by the Sovereignty Movement – an offshoot of the pro-settlement Women in Green organization – which has established and expanded its influence with Israeli politicians and public discourse over the past two years. Zohar has also participated in the movement to reestablish the four settlements in the northern West Bank – Sa Nur, Homesh, Ganim, and Kadim – which were dismantled by the Israeli government as part of the 2005 Gaza Disengagement.