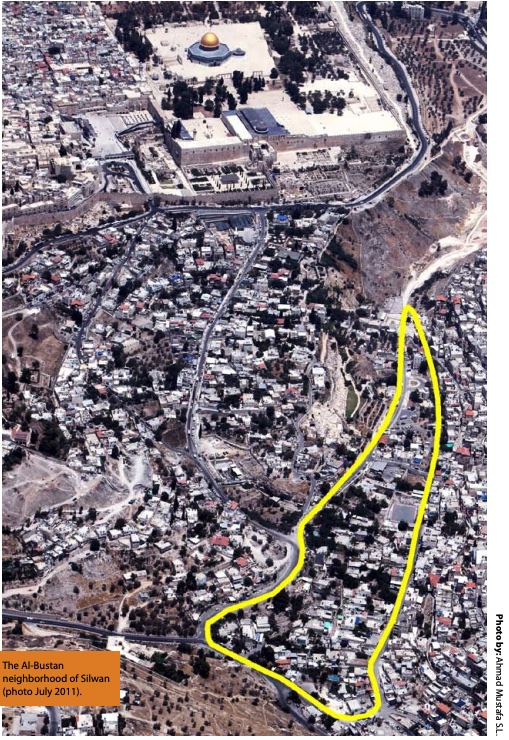 It is widely feared that the demolition of this business presages the imminent implementation of 86 other demolition orders for the same area (housing around 130 families), based on the fact that, like the now-demolished butcher shop, these homes were built without Israel-issued building permits (permits that Israel systematically denies to Palestinians in East Jerusalem). The warning period on demolition orders affecting 14 of those buildings expired on June 27th, meaning bulldozers can appear any day.

The Israeli government has targeted the al-Bustan neighborhood with wide-scale displacement since 2005, when it initiated demolition proceedings on the basis that the buildings do not have Israeli-issued building permits. Israel further declared the area a “green zone” and banned any new construction there. The backdrop to these moves is an Israeli plan to clear al-Bustan of its Palestinian residents in order to make way for an Israeli archaeological park promoted by settlers (the “King’s Garden,” which would be an extension of the settlers’ “City of David” complex).

Residents have until now managed to fight off demolition on the condition that they were engaging with the Israeli government (the Jerusalem Municipality) to develop planning for alternative housing (to which they could be moved). That planning has been ongoing since 2010. Terrestrial Jerusalem explains:

“As noted, in 2017, the Municipality agreed to suspend demolitions while the residents pursue the approval of a statutory Town Plan. The residents’ Town Plan is being drafted by Dr. Yusuf Jabarin, the Dean of Research at Haifa’s prestigious Technion Institute. The plan is working its way slowly through committee, and it is common that plans of this complexity take many years to approve. The plan is based on 11 principles to which the Municipality and the residents both agreed in 2017, and aspires to balance between the housing needs of the residents, the legitimate need for public spaces, in a manner that will serve the residents of al-Bustan, and not the settlers of Silwan. Initially the Municipality viewed the Plan favorably, but, in recent months, that support appears to have been withdrawn.”

In an entirely predictable manner, the new Israeli government led by Naftali Bennet has reached a “deal” with settlers over the fate of the unauthorized Evyatar outpost. Located just south of Nablus, the site of the outpost has become a locus of Palestinian protest and Israeli military violence. Under the terms of the deal, the settlers will (temporarily) vacate the outpost by Friday, July 2nd, with the understanding that the government will leave in place the settlers’ illegal construction at the site — buildings and roads —  while it “examines” the status of the land to see if it can be declared “state land” and therefore legally turned into a settlement (opening the door for the settlers to return). In the interim, under the agreement the outpost will be used as a military base while that examination plays out. 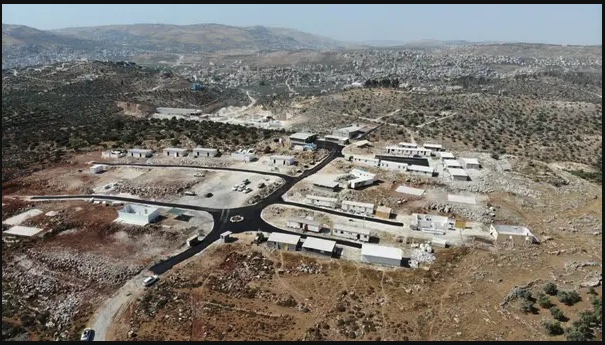 The fact that this “compromise” leaves in place the settlers’ structures and will maintain Israeli control over the site during the “survey” process are clear signals that the government is not concerned with enforcing Israeli law, but rather finding a political solution that works for the settlers. Further, the government of Israel either believes it can,  and is determined to, find a pretext to assert that the land on which the outpost stands – known as Jabal Sabih to the Palestinians who have historically cultivated the it  – is in fact “state land” which can be used by the state as it sees fit (i.e., give it to the settlers).

In response, the anti-settlement watchdog Yesh Din sent a letter to the Israeli Attorney General outlining exactly how the deal with the settlers contravenes international and Israeli domestic law. In a statement about the letter, Yesh Din says:

“The government’s agreement with the settlers of Evyatar rewards delinquency and grants immunity to those committing offenses, which will act to further embolden violent, lawless settlers to take similar action again in the future, knowing they will, at the very least, face no consequences, and, more likely, be further rewarded with land takeover and settlement expansion. On 1 July 2021, Yesh Din sent a principled letter to Israel’s Attorney General and the Legal Advisor to the Ministry of Defense, denouncing the government’s agreement regarding the outpost of Evyatar as illegal, unconstitutional and morally unacceptable. The letter also demands that an investigation by the police and other relevant authorities be launched into the involvement of the Samaria Regional Council for its part in the outpost’s establishment…

Furthermore, the letter clarifies that the government agreement entails a number of flagrant violations of both local and international laws, including:

Settlers squatting illegally at the site are reportedly not entirely satisfied with the deal. A few are threatening to resist removal from the outpost and are continuing to build permanent structures at the site. Part of the discontent relates to earlier reports that the “compromise” would include a commitment by the government to establish a military yeshiva (religious school associated with the IDF) at the site of the outpost, regardless of the outcome of the land status investigation (or even before the outcome is known). In the final deal, the government agreed to establish a yeshiva at the outpost only after the issue of the land’s status is resolved, and only if that issue is decided in the settlers’ favor. However, the settlers are still asserting that the government has agreed to open a military yeshiva at the site immediately, somewhat of a middle road.

Daniella Weiss, a veteran settler leader who is the leader of the group of settlers who established the Evyatar outpost, believes the land survey will confirm the area is “state land” with only minor adjustments to the boundaries of the outpost. She also said that she expects the yeshiva to be open by September, in time for the Jewish High Holidays. Weiss said:

“This government, which has been so sorely criticized, found the noble and uplifting way to talk with us – without over-powering us, but rather with admiration for pioneer builders of the Land. Our goal is not to force the government’s hand, but rather to uplift it. Our achievement is not in going against the government, but rather in bringing it to the place which it itself wants to be.”

The fate of the outpost has posed an early test for Israel’s new governing coalition. Defense Minister Benny Gantz is on the losing side of this issue (where he is joined by the IDF leadership, which similarly wants the outpost dismantled), having insisted just a few days ago that he is the one in charge of deciding the fate of the outpost and that the outpost will be demolished in accordance with Israeli law. Haaretz explains how the negotiations transpired:

“Gantz looked to his right and to his left, and discovered that he was alone. Prime Minister Naftali Bennett and ministers Ayelet Shaked and Zeev Elkin had negotiated energetically with the settlers on several channels simultaneously. And members of the government’s left wing kept silent. Thus a compromise was reached without the defense minister or the army even being briefed on the talks in real time. Gantz tried to set red lines, already at the outset of the Bennett-Lapid government, in which he is a kind of fifth wheel. He sought to  prevent the settlers from creating facts on the ground by taking over land whose legal status is in doubt without any permission from the state or Israel’s Civil Administration in the West Bank. Gantz also sought to prevent the capitulation of the left wing to the right wing in the government. But in reality, it seems that the left has already folded, and the right has laid down its own red line against forcible evictions, which would put Bennett in an uncomfortable situation with what remains of his electoral base. Aside, perhaps, from the new coronavirus outbreak, there probably isn’t an issue in which the government has invested more time during its first two weeks in office than the evacuation of Evyatar. The army doesn’t like the compromise, which defies the original recommendations of its Central Command and the Coordinator of Government Activities in the Territories. Both wanted a full, rapid evacuation of the outpost, which was established in the heart of a group of Palestinian villages south of Nablus. But senior army officers didn’t visit the scene Tuesday morning, and they understand full well the balance of forces there. The moment the prime minister supports the compromise, the army will salute and carry it out.”

“We believe it is critical to refrain from unilateral steps that exacerbate tensions and undercut efforts to advance equal measures of freedom, security and prosperity and a negotiated two-state solution. This certainly includes establishing new outposts which are illegal even under Israeli law.”

Adding more insight on the U.S. position, the Times of Israel reports:

“The Biden administration is willing to give new Prime Minister Naftali Bennett some time before making asks in the Palestinian arena, but it’s not willing to accept complete paralysis and will speak out clearly against unilateral moves, a source said.”

Haaretz reports that the Israel is advancing a plan to pave a new road near the Beitar Illit settlement that will cut through agricultural land belonging to (and actively farmed by) the Palestinian village of Wadi Fukin. If paved, in addition to hemming in Palestinians and closing off their access to their land, it is feared that the projects will restrict the flow of water into natural springs used by Palestinians for farming in the area. This would also be the first road to cut into a wooded area.

Palestinians were not directly informed of this plan, but found out after the plan had been filed with the Civil Administration’s planning authorities. Bimkom, an Israeli NGO, filed an appeal three weeks ago seeking to have the plan frozen until residents of Wadi Fukin can be included in the planning process.

“No one from the Civil Administration talked to us or explained exactly where the road will pass. We don’t know to what extent this will damage our lands and people are very confused and frightened by this road.”

The planned road is connected to two other significant settlement plans in the area, both targeting areas located just south of Bethlehem. One of these plans would expand settlement construction on lands near the Wadi Fukin village. The other plan relates to expansion of the Beitar Illit settlement and the construction of a new settlement – called Gv’aot – on land that historically belonged to five Palestinian villages in the Bethlehem area: Jaba, Surif, Wadi Fukin, Husan and Nahalin. In 2014, the Israeli government issued unilateral, mass expropriation orders for the land (which Israeli officials explictly said was in response to a Palestinian terror attack). At the time, Peace Now reported that the move constituted the largest single expropriation of Palestinian land by the Israeli state in over 30 years. It wasn’t until August 2019 that Israeli planning authorities gave final approval to a plan for a new settlement, including 61 housing units and an educational institute. Today, as it stands, the new units have not been constructed, but a small outpost – which calls itself Gv’aot – has been established…on land not allotted by the Israeli government for future settlement construction.

The Palestinian team reportedly included the following proposals related to settlements and annexation in their list:

An anonymous source with knowledge of the Palestinian initiative told Haaretz:

“Not all of the proposals appearing in the document can be implemented at the present time, but even if it would be possible to advance some of the steps, at least in the civilian field, that would provide achievements to the Palestinian public and improve their day-to-day lives.”