As violence continues to escalate across the West Bank and in East Jerusalem, this week settlers have continued, seemingly uninhibited, to instigate clashes with and terrorize Palestinians in the West Bank. Some key examples include the following (for an even more thorough listing, see the Palestine Center for Human Rights’ weekly report):

It’s worth recalling that settlers have staged several protests and marches over the past few weeks, ostensibly to pressure the Israeli government to intensify its ongoing military operation in the West Bank – which Israel has dubbed “Break the Wave” – a reference to recent attacks against Israeli civilians (and IDF soldiers, bearing in mind that when IDF personnel are injured/killed in any context by Palestinains, Israel in effect counts those IDF personnel as civilian victims of terrorism).  This operation involves Israel staging near daily raids into Palestinian cities in the West Bank — tactics that have led to numerous Palestinian deaths/injuries/detentions.

Notably, the settler march held on October 11th attracted nearly 10,000 people  – including lawmakers Bezalel Smotrich and well-known Kahanist (who is likely to be a powerful plate in the next Israeli government) Itamar Ben-Gvir. The settlers paraded from the Shavei Shomron settlement to the nearby Palestinian town of Sebastia, where settlers have been engaged in an effort to take control over antiquity sites under Palestinian control in the city. At the conclusion of the march, settlers staged a festival in Sebastia with live music acts, speeches, and more.

“We came here today to wave the Israeli flag, to state that we won’t surrender to those who wish to kick us out of our land. We will continue to settle, march, and hike through our entire country. To answer terror we build the land of Israel. We are excited to see the thousands that are marching with us.” 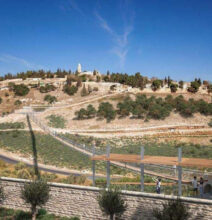 Emek Shaveh reports that a ceremony was held on October 6th to lay the cornerstone of a new pedestrian footbridge over the Ben Hinnom Valley/Wadi Rababa in Jerusalem. The bridge is a project pushed by settler groups and will serve to connect two settler-operated tourist facilities located in two Palestinian neighborhoods on opposite sides of the valley – one in Abu Tor and the other in Silwan. The ceremony was held at one of those settler-run tourist facilities – known as the “House in the Valley”, operated by the Elad Foundation – and was presided over by Israeli Minister of Jerusalem Affairs Ze’ev Elkin, Israeli Transportation Minister Yoel Razvozov, Jerusalem Mayor Moshe Leon, and Israeli Antiquities Authority director general Eli Eskosido.

“The bridge is another project in a list of new projects which are transforming the valley, such as the cable car, and the Elad Foundation’s Farm in the Valley (also called Center for Ancient Agriculture). All of these are part of the larger strategy to establish a continuum of biblically themed tourism ventures and Jewish residential settlements in the Silwan-Hinnom Valley area using a variety of legal and administrative mechanisms to displace Palestinians from their homes, shrink their public spaces and downplay their heritage.”

At the cornerstone laying ceremony on October 6th, Minister Elkin confirmed the intent behind the bridge, saying:

“the suspension bridge is an important strategic project led by the Ministry for Jerusalem Affairs and other partners. We are working to turn the Hinnom Valley into a developed tourism zone and in so doing achieve two additional goals: one is to strengthen the sense of security and sovereignty in the area, the other is to ease access to the Old City.”

On the Abu Tor side of the bridge, the Elad settler organization runs and operates a cultural center and cafe named “House in the Valley,” which opened in 2019 after Elad evicted a Palestinian family and renovated the space. A week after Elad’s new cultural center was opened, the Jerusalem Municipality issued “gardening orders” to take control, for an initial period lasting 5 years (with the likelihood of extensions after that) of 12 nearby plots of privately-owned Palestinian land. “Gardening orders” allow Israel to “temporarily” take over privately owned land for what are ostensibly public purposes (like establishing a parking lot or public garden), based on the argument that the private owners are not presently using the land. In this case, Israel has in effect made rules that guarantee that the latter condition applies: as Emek Shaveh has noted, the 12 plots in question are located in an area declared by Israel to be a national park, meaning that private landowners are legally barred from using their own land.

On the Silwan side – a neighborhood where Elad (alongside other settler organizations, including Ateret Cohanim) is waging a house-by-house campaign to displace Palestinians in favor of settlers and settler-run tourist sites – the bridge will end near the Sambuski cemetery, which until recent years was a relatively unknown, neglected site that even Israel did not recognize as a holy site. Under the Trump “Peace to Prosperity” plan, the Sambuski cemetery was suddenly transformed into a place of prime historical and religious importance to Israel. The Emek Shaveh – which has a special expertise on archaeology and the weaponization of archaeology to serve the political agenda of the settlers and the state – wrote a report on exactly how the Trump “Vision” supports settler efforts to use Jerusalem’s history and antiquities to promote Israeli-Jewish hegemony and control over the city.

Emek Shaveh reports that Eli Eskosido, the Director General of the Israeli Antiquities Authority, has been sharing a map showing a new “Hasmonean Palaces National Park” on land located southwest of the Palestinian city of Jericho. Notably, the land in question is located in Area C of the West Bank – where the domestic Antiquities Authority does not, legally (under Israeli law and the Oslo Accords) have any jurisdiction.

The Hasmonean Palaces archaeological site was identified in the Oslo Accords as a place of  “archaeological and historic importance to the Israeli side”,  granting the Israelis control over this enclave of land within a Palestinian population  center. However, the area has not been developed by the Israeli government. Emek Shaveh reports that while a National Park has been planned for the area, it does not currently exist.

Bizarrely, the map promoted by Eskosido is emblazoned with the logos of domestic Israeli government bureaus, which – again – do not have any jurisdiction in the West Bank. A settler group focused on weaponizing archaeology to advance Israeli annexation in the West Bank, “Guardians of Eternity,” alleges that the site has been subject to damage by Palestinians over the years. Emek Shaveh reports that the Binyamin Regional Council – the municipal association in charge of settlements in the area – is reportedly interested in taking over direct management of the site.

“The publication of the map by Mr. Eskosido is another manifestation of steps towards de facto annexation in the realm of antiquities which we wrote about earlier this year following the Knesset’s committee’s recommendation of expanding the Israel Antiquities Authority remit into Area C.

The investment in this site is an outcome of a persistent campaign by Guardians of Eternity (Regavim) and the Shiloh Forum which exploits historical, religious and cultural affinities of the Jewish people to sites in the West Bank with the aim of galvanizing the Israeli government to expand and deepen its control. This latest involvement by the IAA in the Hasmonean Palaces should be considered within this context. Although damage by Palestinians to the site is a problem, for the most part this takes the form of light construction. It is certainly not an expression of a Palestinian Authority led plan to destroy Jewish heritage in the West Bank as the settlers repeatedly claim.”

Over the Sukkot holiday, settlers in the northern West Bank staged a renewed push for the government, specifically Defense Minister Benny Gantz, to act in order to formally establish the Evyatar settlement and yeshiva, located on Palestinian lands just south of Nablus. In February 2022, the outgoing Israeli Attorney General issued an opinion that provides a basis for granting retroactive legalization to the Evyatar outpost (which would mean authorizing Evyatar as a fully-approved new settlement, “legal” under Israeli law). Since February 2022, Defense Minister Gantz has had the authority to declare the area as “state land” as the first (and most significant) step towards authorizing Evyatar. For reasons that remain unclear, Gantz has not (yet) made a move to do so.

The saga of the Evyatar outpost became a recurring headline news story over the past two years, mostly as a result of the determined effort by Palestinians from the nearby village of Beitar to protest the Evyatar outpost and to resist the Israeli government’s efforts to retroactively legalize it. Palestinians staged regular protests near the site of Evyatar outpost, which was built illegally by settlers on a hilltop that Palestinians have long known as Mt. Sabih, land which has historically belonged to the nearby Palestinian villages of Beita, Yatma, and Qablan. No fewer than seven Palestinian protestors died as a result of the harsh and violent attempt by the IDF to quash the protests.