On October 21st, the Israeli news outlet Israel Hayom reported that the Israel Land Fund – which is headed by Jerusalem Deputy Mayor (and longtime settler impresario) Aryeh King – is speeding toward the start of construction of three new settlement projects in the Um Haroun section of the Sheikh Jarrah neighborhood in East Jerusalem. According to Israel Hayom, the projects would provide for the construction of 20 settlement housing units and an office building, doubling the number of settlers in Sheikh Jarrah. 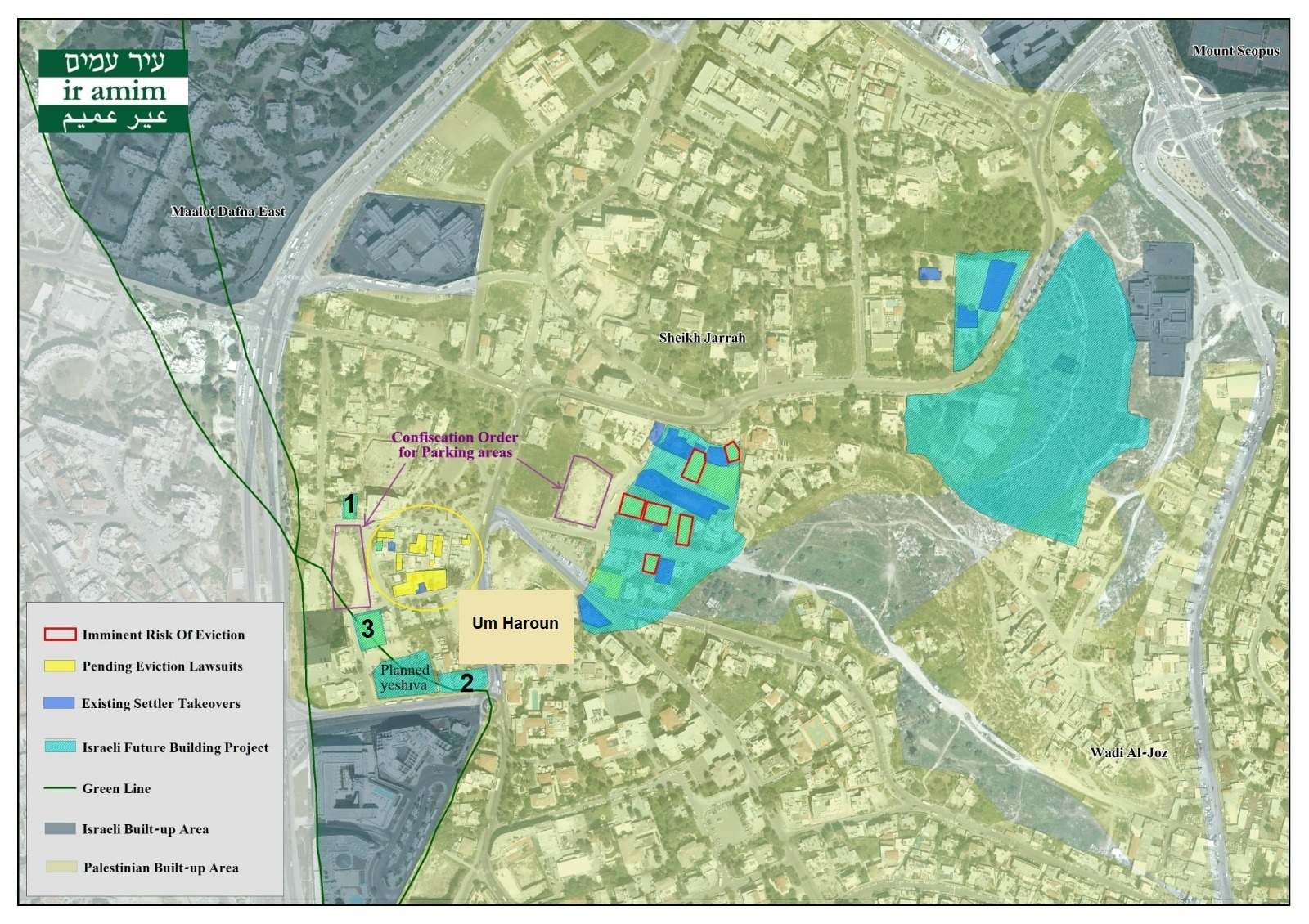 Although Israel Hayom’s reporting is imprecise with respect to the exact plans under discussion, Ir Amim reports that the projects in question are likely those that received final approval in 2019, after having been advanced swiftly through the planning process under the Trump-Netanyahu era. Building permits have not been issued for these projects, but requests for those permits have been submitted or are in process. Notably, Ir Amim reports that two of the three plans being advanced will require the demolition of existing Palestinian buildings that house six Palestinian families, likely leading to legal petitions.

The Palestinian Authority’s National Bureau for Defending Land and Resisting Settlements alleges that the plans have been advanced through forgery, writing:

“The settlement plans are driven behind the scenes by the so-called ‘Land of Israel Fund founded by Arieh King, who is the deputy mayor of the occupation in Jerusalem. Officials in the Fund are very active in seizing Palestinian lands by forging documents and title deeds, preparing fake sale and purchase contracts, and buying land through forged deals.”

While Settler Violence Surges, Israeli Government Appoints a Settler as Next IDF Chief of Staff

On October 23rd, Major General Herzi Halevi was appointed as the incoming Chief of Staff for the Israeli military, marking the first time that a settler has been appointed to this prominent post. Halevi will start a three-year term in January 2023. The appointment of Halevi comes amidst surging settler violence and increasing documentation of Israeli soldiers assisting, enabling, permitting, and joining settler violence against Palestinians.

“There’s this fiction that people in the international community seem to have that somehow there’s Israel and then there’s the settlements – as though they are separate and apart from one another. But really, in reality, we see that it’s all one.”

Major General Herzi Halevi lives in the Kfar HaOranim settlement in the northern West Bank, a settlement which is located in the “seam zone” (i.e. on the Israeli side of the separation barrier, in an area where the barrier’s route cuts into the West Bank). Kfar HaOranim was built on land historically belonging to the Paelstinian village of Saffa.

Exposed: Israel is Trying to Hide Water Allocation to the Settlements

The Israeli NGO Kerem Navot reports that, beginning in 2017, the Israeli Water Authority began hiding details of its service provision to settlements and outposts in the West Bank. The Israeli Water Authority is the Israeli government’s utility provider responsible for water and sewage management, and though it has long operated in the West Bank – which is outside of Israel’s sovereign borders – it suddenly stopped reporting how much water it allocates to settlers.

Kerem Navot explains the importance of this:

“These are agricultural water allocations, without which those same settlers would not be able to establish dozens of illegal outposts and pirated farms, and take over tens of thousands of dunams of land for cultivation or to be turned into pastures. This is a tactic that has been in use for years, in tandem with other channels through which the state supports the oftentimes violent lawbreakers in the West Bank…For some reason, in the water books that have been publicly available since 2018, the detailed information on water allocation to specific consumers in the settlements largely disappeared…A few years ago, someone within the Water Authority seemed to have suddenly woken up and realized that there was a problem with this. No, not a problem with supplying water to those settlers who violate the law, as that has continued without interruption. But rather with the fact that the Water Authority reports about that water supply every year, at the level of detail of cubic meters of water (1 cubic meter = 1000 litres).”

Kerem Navot provides further information on the settlements, outposts, and settlers that have in the past been specifically named in the annual water books – – the history of which shows how the Water Authority provides essential infrastructure enabling the continued dispossession of Palestinian land by violent settlers. Kerem Navot reports:

The incident receiving the most attention this week involves what appears to be a uniformed soldier caught on film providing  smoke grenades to a settler who was participating in an attack on Palestinian harvesters in an olive grove near the village of Burin in the northern West Bank. The settler subsequently threw the grenade in the direction which the soldier was pointing –  towards the Palestinian harvesters. It was subsequently reported that the soldier was actually an Israeli civilian – the security coordinator for the nearby Har Bracha settlement – dressed in IDF fatigues. The individual has since been suspended from his post while the IDF conducts an inquiry into the event. The Israeli NGO Yesh Din, whose employee filmed the incident, reports that the attack caused thousands of dollars of damage and injured at least two Palestinians.

Yesh Din responded to reports of the settlement security officer being suspended, saying

“The head of the Har Bracha settlement must be removed from his position and prosecuted for his serious actions. It must also be investigated why he wore a uniform – being a civilian and not a soldier, and why he possessed any means of dispersing demonstrations in violation of the instructions and the law.”

Also receiving attention this week: settlers launched a violent attack on olive harvesters working their fields in Turmus Ayya in the northern West Bank. Photos from the incident document IDF soldiers standing by while the attack unfolded, intervening only later to violently chase Palestinians off of their own land. One Palestinian was injured by a stun grenade thrown at them. Settlers later set two Palestinian cars on fire while soldiers were looking on.

Meanwhile, there still have been no arrests in the case of settlers caught on film lynching longtime Israeli activist, Hagar Gefen (70 years old), last week. Indeed a new settler group calling itself “The Forum for the Struggle for Every Dunam” has since issued a statement claiming to have taken part in the incident and attempting to place blame on Palestinians.

Remarkably, both Gefen and Israeli activists from the Center for Jewish Non-Violence (who were also victims of settler attacks this week) are persisting in their solidarity work. From her hospital bed, Gefen told The Times of Israel that she “feels good” about continuing her solidarity work, and that:

“Cruelty [against Palestinians] is taking place in those hills, not only during the olive harvest…but all the time.”

The Center for Jewish Non-Violence wrote in a newsletter this week:

“We are only a few days into our mini Olive Harvest delegation and already we have witnessed the variety of obstacles that this season brings to Palestinian communities across the West Bank. On Tuesday, we didn’t pick a single olive before 30 masked settlers came down from the nearest outpost to attack us. Under the full protection of the army, the settlers threw stones at the farmers and activists, burnt multiple Palestinian cars, and successfully delayed our harvesting work.

Returning to and working on olive trees each year is an essential element of Palestinian resistance. In addition to the financial significance that it holds for many families, it often is used to show the Israeli courts that the land is still in use and can’t be handed over to the state. Today, we visited a farmer in Hebron who’s land now sits between the settlements of Kiryat Arba and Givat Avot, where far-right Member of Knesset Itamar Ben Gvir resides. As a result of lengthy legal battles, the farmer and his family won the right to harvest from their land once or twice a year. With the help of a big crew of activists today, we were able to support the family in harvesting all of their olives.

One thing has proven true across the communities we have visited so far — that the unique and powerful symbol of the olive tree is especially important in this time. The steadfastness and rootedness that the olive tree represents models the critical practice of ‘Sumud – existence as resistance’ inside Palestinian communities of Area C.

As the delegation carries on, we will continue to show up where support is needed most, following the activists of Faz3a, Youth of Sumud, Masafer Yatta, and across the West Bank to wherever we can be helpful. Follow our social media to see what’s up!”