On October 28th, U.S. Ambassador to Israel David Friedman signed an amendment to several scientific agreements, removing geographical restrictions limiting the application of the agreements to inside the Green Line. In practice, those restrictions barred Israeli educational institutions located in West Bank settlements and in the Golan Heights (outside of Israel’s recognized borders) from participating in the U.S. taxpayer-funded science programs. This amendment, in effect, confers U.S. recognition of Israeli sovereignty over settlements, defining settlements as a part of the sovereign state of Israel.

Regarding the behind the scenes moves leading up to this change, Axios reporter Barak Ravid says:

“This is a substantial shift in U.S. policy. Until today the U.S. government was not allowed to spend tax payers money in the Israeli settlements in the West Bank and East Jerusalem. The new agreements will allow it…Israeli official told me this U.S. policy shift was led by U.S. ambassador to Israel David Friedman. The official said Friedman wanted to make this move as a gesture for Netanyahu & the settlers after [West Bank] annexation was halted as part of the normalization deal with the UAE.”

“To be clear: this is, in effect, the Trump admin[istration’s] official recognition of Israeli sovereignty over [the] West Bank.”

“a clear recognition of Israel’s annexation of Palestinian territory.”

Putting it rather succinctly, Kohelet Forum scholar Euguene Kontorovich – who has been arguing for the legality of Israel’s settlements for years – told the Washington Post:

“This historic international agreement cements U.S. policy that Israeli settlements are not illegal, and puts money behind it.”

The agreements were signed by Amb. Friedman and PM Netanyahu at a ceremony held in the Ariel settlement – the location of a new medical school funded largely by U.S. casino magnate and Trump mega-supporter Sheldon Adelson, (who was reportedly also behind the push to amend the agreements). Israel has already de facto annexed the university, as a matter of Israeli law, through a drawn out process over the past three years which culminated in Ariel’s university being treated, under Israeli law, as exactly the same as a university located inside the Green Line. The signing of the amendments this week means that the medical school will be able to receive U.S. funding to participate in U.S.-Israeli cooperative projects. It is also worth recalling that the Ariel settlement is located in the heart of the northern West Bank, reaching literally to the midpoint between the Green Line and the Jordan border. The future of Ariel has long been one of the greatest challenges to any possible peace agreement, since any plan to connect Ariel to Israel will cut the northern West Bank into pieces.

In a statement, the U.S. Embassy gloated over the significance of removing geographical restrictions, saying explicitly:

At the signing ceremony – which many settler leaders who have been critical of the Trump Plan were not invited to – Amb. Friedman added yet another rationale for expanding the agreements to include the settlements, saying that the Trump Administration places:

This “economic peace” rationale was lauded by U.S. Senator James Lankford, who has been pushing U.S. legislation that will fund joint Israeli-Palestinian business projects in the West Bank. See FMEP’s Lara Friedman response to Lankford’s reasoning here. As FMEP has explained many times, economic “coexistence” initiatives are in fact efforts to normalize, entrench, and reward Israeli settlements while perpetuating Israel’s economic exploitation of occupied territory (including the local workforce, land, and other natural resources). Congressional support for such initiatives could mean U.S. taxpayer dollars going directly (and publicly) to the settlements.

“annexation is not off the table, just pushed off for now.”

U.S. Takes Another Step to Recognize Israeli Sovereignty Over All of Jerusalem

On October 29th, the U.S. State Department announced that the Embassy will begin allowing U.S. citizens born in Jerusalem to list Israel as their country of birth on their passports, in effect recognizing Israeli sovereignty over all Jerusalem (even settlements in East Jerusalem). The U.S. will now allow individuals to choose whether to have “Jerusalem” or “Jerusalem, Israel” – but not “Jerusalem, Palestine” – listed on their U.S. passports. This is no small matter, evidenced by the decades of lobbying in the U.S. in support of exactly this policy change.

This change builds upon the Trump Administration’s December 2017 recognition of Jerusalem as the capital of Israel.

“We are happy that today the US has kept its promise to Israel and completed the process of recognizing Jerusalem as Israel’s capital. American citizens born in our capital city will finally be able to have Israel written as their country of birth. It is long overdue, and we are grateful to President Trump and Ambassador Friedman for their leadership on this.”

Israeli authorities have informed the Jerusalem District Court that they intend to issue tenders in the coming days for the construction of 31 new settlement units on Shuhada Street in downtown Hebron, despite the fact that the Court ordered a stop on the settlement project until a pending egal challenge is resolved. The Court’s next hearing regarding the petition is scheduled for January 31, 2021.

If built, the units would create a new settler enclave in the city (in effect, a new urban settlement, disconnected from already existing settlements in the city). It will be the first new settlement construction approved in downtown Hebron – where Palestinians already live under apartheid conditions –  since 2002.

Defending the move, Israeli authorities claim that they are able to issue the tenders without violating the Court order because the order only bars actual construction (not preparations for it). It should be noted that award of tenders is considered a point of not return in the pre-construction process, since tenders involve third-party financial interests (meaning that canceling them can mean lawsuits from developers and individuals). 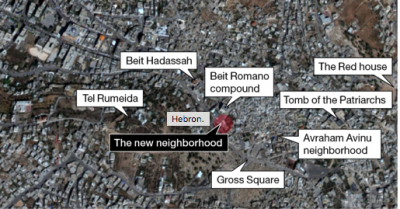 As a reminder: in October 2017, the Israeli Civil Administration approved a building permit for the 31 units, on the condition that the Palestinian municipality of Hebron and others would have the opportunity to file objections to the plan. Soon after, two appeals were filed with the Defense Ministry: one by the Palestinian municipality of Hebron and one by the Israeli settlement watchdog Peace Now. The legal objections to the plan stem from the problematic process by which Israel made land in downtown Hebron available for settlement construction. Located in the Israeli-controlled H-2 area of Hebron (where 500 Israeli settlers live amongst 40,000 Palestinians), Israel seized the land in the 1980s from the Hebron Municipality, for military purposes. In 2007, the Civil Administration’s Legal Advisor issued an opinion stating that once Israel is done using the land for military purposes, it must be returned to the Hebron Municipality, which has protected tenancy rights to the land. Nonetheless, in 2015, the Israeli Civil Administration, with the consent of the Minister of Defense, quietly authorized the Housing Ministry to plan the area for Israeli settlement use, paving the way for that same ministry to subsequently present the plan for 31 units.

In October 2018, with the legal challenges still pending, the Israeli Cabinet voted to expedite the planning of the new settlement and allocated approximately $6.1 million (NIS 22million) for the project, which will require Israel to significantly renovate a military base in order to build the 31 new settlement units, a kindergarten, and “public areas.”

“The state was quick to issue the building permit even though the court has explicitly ruled that work should not start until the… hearing takes place….The attempt to squeeze in this construction of 31 settlement units before the U.S. election is an unscrupulous act that threatens Israel’s national interest and relations on the world stage.”

On October 25th, the Israeli-run Jerusalem Development Authority — a joint agency of the government and the Jerusalem Municipality — held the first of two meetings for developers interested in bidding on a settler-backed project to build a cable car in East Jerusalem, despite the fact that the Israeli Supreme Court has not yet issued a final ruling on whether or not the state is permitted to expropriate the privately owned Palestinian land that is needed to carry out its construction (for background, see recent reporting in the Settlement Report). A second meeting for prospective developers is reportedly scheduled for next week.

The High Court is actively considering the cable car case, having ordered the state to offer a factual explanation for how the cable car line will boost tourism in the city – an explanation that the state has struggled to articulate convincingly. In response, the State recently submitted an 81-page explanation of the project regurgitating the same arguments it has previously made. The Court is now awaiting response from the petitioners to the State’s latest filings.

The Jerusalem Post reports that settler leadership is pressuring Prime Minister Netanyahu to immediately grant retroactive approval to the hundreds of Israeli outposts in the West Bank that are illegal under Israeli law (and for which Israel has been unable, despite an all-out effort, to find a way to legalize, short of simply declaring that rule of law is irrelevant). The Knesset Land of Israel Caucus is also preparing legislation to achieve this end.

The Post reports that settlers, having impatiently waited as the government has delayed action on many outpost authorizations — as successive elections and then the U.S. promise of annexation have come and gone (for now) —  are upping the pressure on Netanyahu to act in a decisive manner on the outposts. Peace Now notes that, despite the settlers’ allegations of foot-dragging, over the past two years the Israeli government has managed to grant retroactive legalization to 21 outposts. with 9 more in process. Instead of considering each outposts’ legal status in a piecemeal manner, the settlers want Netanyahu to grant authorizations in one swift and blanked act – regardless of the facts of each outpost (like private Palestinian ownership of the land on which some outposts have been constructed).

Settlers apparently view this as urgent, given the fact that the Trump Plan leaves around 15 outposts as enclaves within the borders of what is envisioned as a future Palestinian non-state entity. Settlers also view this as just, asserting that Netanyahu owes the settler movement this as “compensation for his failure to to fulfill his annexation pledge.”

The Jerusalem Post article also does a surprisingly great job of explaining Israeli efforts over the past two decades to approve these outposts, which entered a new phase in 2017 with the passage of the Settlement Regulation Law – passed by the Knesset to allow provide a new legal basis by which the government can grant outpost approvals. FMEP has also comprehensively tracked [Table #3] Israel’s efforts over the past two years to retroactively legalize the outposts.