Ir Amim reports that, as a result of Israel’s secret registration of land in East Jerusalem, 30 Palestinian families received eviction notices instructing them to leave their homes by September 1, 2022. Since the deadline has passed, the Israeli General Custodian can open a legal case to pursue their eviction at any moment. The eviction notices appear to be premised on Israel’s secret registration of land between near Abu Dis and Jabal al-Mukhaber, which was made public in August 2022. 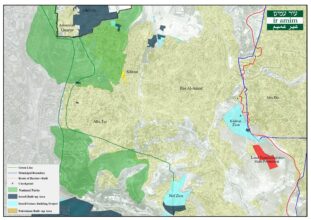 There are two significant problems to this pretext. First, Ir Amim reports that only 3 of the 30 families which received eviction notices actually live on the parcel of land which State seized control of – the 27 other families live nearby but not within the borders of the parcel of land.

Secondly – and perhaps more significantly – Ir Amim has new evidence that forty years ago Israel examined the ownership of the same exact parcel of land and determined that it was privately owned by Palestinians, not Jews, prior to 1948. This new finding completely delegitimizes the premise on which the State seized control of the land this year.  Ir Amim writes:

“Beyond the fact that most of the families facing eviction do not even reside on the respective plot, according to Ir Amim’s examination, there is no evidence to corroborate claims of Jewish ownership of the land designated as bloc 31735. This calls into question the means in which the General Custodian registered the land under its management. Due to the fact that the procedure was carried out in a covert manner and authorized in a closed court proceeding—likely at the behest of the General Custodian—it is impossible to ascertain the basis of its claims. While the Israeli media reported that the Custodian registered the land under its management based on proof affirming Jewish land ownership from the early 20th century, the documents Ir Amim acquired refute those claims.”

To learn more about Israeli land registration – and how it is being used as another tool to dispossess Palestinians in East Jerusalem – listen to FMEP’s recent podcast episode on this topic featuring Amy Cohen of Ir Amim.

Occupied Thoughts by FMEP · A Settler Tool & A Catch-22 for Palestinians: Land Registration in East Jerusalem

In Major Step Towards Authorization (Under Israeli Law), Israel to Provide Security to Outposts

On September 29th, the Israeli military announced that, for the first time, it will provide security for illegal/unauthorized outposts, which will include equipping these outposts with surveillance and warning systems, lighting, public address systems, and firefighting equipment. The army’s announcement touted this as a “major change in policy,” and further, “the army’s job is to protect any place where Israeli citizens and residents are found. This important and necessary change will enable us to bolster the region’s layers of defense.”

Underscoring the absurdity of the situation, the Israeli army plans to only provide outposts with portable equipment – – because permanent construction in the outposts is illegal under Israeli law. The State has tried for years to correct that fact, having commissioned several councils and task forces to examine the legal status of each outpost and plot legal paths towards authorization. That work is still ongoing. By providing military protection to the outposts, Israel is undertaking a significant step towards retroactively authorizing the outposts and in fact proceeding with the de facto annexation of the outposts.

The Forum for Young Settlements (which is a euphemism for outposts) celebrated that military’s decision as a big step towards authorization, saying:

“[the IDF’s decision is] an important step towards full authorization…We are happy that two years after Defense Minister Benny Gantz toured ‘young settlements’ and after our hard work and repeated requests, he has finally decided that it is not possible to endanger our lives and the lives of our children any longer,” the forum said in response to the decision.”

The Israeli anti-settlement NGO Yesh Din said that, with this new decision:

“the army will provide protection to the lawbreakers, and has thereby turned itself and its soldiers into partners in crime. Granting protection to the outposts is a reward for the criminals who live in these illegal outposts and a continuation of the policy of creeping annexation of the West Bank that is being pushed by extremists under the auspices of the Israeli government.”

“Illegal outposts need to be dismantled, not secured.”