The Israeli government demolished eight Palestinian structures in the East Jerusalem neighborhoods of Silwan, Beit Hanina, Jabal Mukaber, and Isawiyyah. According to Ir Amim, the two apartments demolished in the al-Bustan area of Silwan are the first demolitions to be carried out there since 2008. Looking at East Jerusalem as a whole, Ir Amim writes, “[these] demolitions bring the 2017 total to 128, including 84 residential units and 44 non-residential units. These numbers are on well on target to meet or surpass the total number of 203 demolitions executed in East Jerusalem last year.”

Bedouin are Powerless in E-1 Area as Settlement Plans Loom

According to B’Tselem, last week Israeli officials confiscated solar panels that were providing electricity to a Bedouin community’s school in the controversial area adjacent to Jerusalem known as “E-1.” The confiscation happened despite a temporary court-ordered injunction against it. The Israeli government has long refused to connect the Bedouin to a power grid; the solar panels confiscated this week were donated only a month ago by a humanitarian organization. 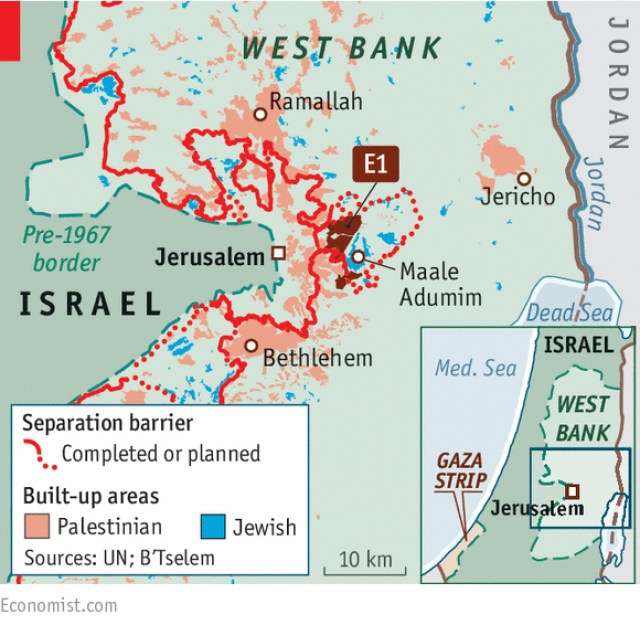 Map by the Economist

The E-1 area has long been slated for Israeli settlement construction, but plans have been continuously delayed by the Israeli political echelon – due in large part to pressure from U.S. administrations and others in the international community. If E-1 is developed it will seal Palestinian East Jerusalem off from the West Bank to its east, and create a land bridge from Jerusalem to the Maale Adumim settlement. The settlement will render the two-state solution impossible because it would preclude the ability to draw contiguous borders for a future Palestinian state with a capital in East Jerusalem.

East Jerusalem expert Danny Seidemann has issued several warnings this year that E-1 – a “doomsday settlement” – might be slated for advancement under the current settlement policy of the Netanyahu government and with no discernable counter-pressure from the Trump Administration. Seidemann warned in January, “The main obstacle preventing a green light for E-1 has, until now, been wall-to-wall opposition from the international community, led by the United States (dating back to the era of President Clinton).”

The Bedouin community living in the E-1 area has long been threatened with forcible relocation (which would amount to population transfer). The 18 Bedouin tribes that live in the vicinity of Maale Adumim and E-1, totaling approximately 3,000 people, have already endured numerous emolitions this year alone.

According to Peace Now, the Jewish National Fund (JNF) is set to resume its practice of purchasing land in the West Bank for use by Israeli settlers, after abandoning the effort many years ago. In the past, many of the JNF’s land purchases reportedly involved fraud, extortion, and/or forgery on the part of middlemen.

Peace Now writes, “Through purchasing lands in the occupied territories, JNF serves the settlers, hurts the possibility to arrive at a two state solution, and jeopardizes the future of Israel as a Jewish and democratic state.”

The JNF – which collects donations internationally, including in the United States – currently owns land (through its Israeli subsidiary) in numerous settlements, including Itamar, Alfei Menashe, Enav, Kedumim, Givat Ze’ev, Metzadot Yehuda, and Otniel.

There have been several recent reports about structures inside of settlements that were built (or are being built) without the legally-necessary permissions, as Israeli officials turn a blind eye. Map of the Hayovel outpost by Times of Israel Red encircles site construction, arrow points to the house of Liberman’s settlement affairs advisor.

Notably, one report identifies dozens of unauthorized homes being built in the outpost of Hayovel (which is effectively an extension of the settlement of Eli), despite a stop-work order issued by Civil Administration (the arm of the Ministry of Defense that is sovereign in the West Bank). The construction is taking place virtually across the street from the home of Israeli Defense Minister Avigdor Liberman’s own adviser on settlement affairs, who is himself a resident of the illegal outpost (Liberman is also a settler, residing in the settlement of Nokdim). The illegal construction will double the size of the outpost.

Another report reveals that Shlomo Ne’eman, the head of the Gush Etzion Regional Council – which promotes the expansion of settlements in the Etzion bloc – lives in an illegal outpost. The Regional Council insists that the outpost is a “neighborhood” of the Karmei Tzur settlement, but aerial images show it is outside of the settlement’s municipal border. The Israeli Civil Administration has ordered the structures there to be demolished but has not carried out those orders. Settlement watchdog Kerem Naboth says, “Ne’eman has joined the list of elected officials and politicos among the settlers who are not only assisting others in stealing land, but are also doing it themselves.”

Haaretz notes that these two are part of a longer list of elected officials and senior civil servants living in illegal outposts, Also on that list far right-wing Knesset Member Bezalel Smotrich (Habayit Hayehudi), who lives in an illegally-built home in Kedumim (not coincidentally, Smotrich was one of the key backers of a law passed earlier this year to “legalize” such settlement illegalities). Likewise, a January report revealed that the head of the Finance Ministry’s department of building regulations enforcement, Avi Cohen, lives in an illegal outpost of the Eli settlement. At the time of the report in January, Rabbis for Human Rights said, “A situation in which the system responsible for enforcing building laws is headed by someone living in an outpost demonstrates contempt for the system and Israel’s values.”

Another report documents how in the Efrat settlement (in the Etzion settlement bloc) a school was recently expanded, illegally, on private Palestinian land located land outside of the settlement’s border. Funding for the project was raised by an organization, called the Ohr Torah Stone, which operates a branch in the United States and is eligible to receive tax-deductible donations from U.S. donors. According to settlement watchdog Kerem Naboth, the Efrat settlement itself was built on land that the Palestinian village of al-Khadr had long cultivated. Kerem Naboth reports, “aerial photographs from the 1980s indicate that in the past there was a vineyard on site.”

Speaking in Sheikh Jarrah, former Israeli Attorney General Michael Ben-Yair called on the Israeli government to intervene to stop the eviction of the Shamasneh family from their longtime family home. Ben- Yair served as the AG from 1993-1997, under prime ministers Rabin and Netanyahu.

Ben-Yair, whose family lived in Sheikh Jarrah until 1948, suggested he would be ready to reclaim his family’s property and then transfer it to the Palestinians currently living there – and called on the government to adopt a policy to do exactly that, across the board. He said, ”If the Israeli government would have acted decently toward all its residents, including you [the Arab residents], it would have appropriated the properties in the neighborhood [from their Jewish owners who lived there before the War of Independence] and given these properties to the Palestinians who live there today.”

The former AG also noted that Jews who lost property in the 1948 war were already compensated – at the expense of Palestinians. Ben-Yair said, “My family and the family of my cousin who were forced to leave the neighborhood in January 1948 got properties of Palestinians refugees on Jaffa Road and in the Katamon neighborhood in west Jerusalem. They were worth much more than the properties that we left in Sheikh Jarrah.

Since we covered the Shamasneh family’s story last week, a temporary injunction against the eviction expired on Sunday, August 13th. The family’s lawyer requested a second injunction, but the petition is still pending. As of this writing the family is still living in the home.

The Palestinian Authority is reporting that settlers from the radical Yitzhar settlement, south of Nablus, have moved 11 mobile homes to an area outside of the settlement, a move which would expand the settlement’s footprint. In addition, nine mobile homes were reportedly placed near the Palestinian village of Qusin, which is a few miles east of Nablus, and another nine were placed near the border of the Einav settlement, a few miles east of Qusin.