Netanyahu: Israel Will Not Withdraw from Settlements, Ever

Israeli Prime Minister Benjamin Netanyahu continues to make the case that no Israeli government has been better for settlements than his own. This time around, he did so at an event held in a settlement, celebrating 50 years since took control of the West Bank (or, occupied and began illegally settling civilians in it).

At the event, Netanyahu pledged, 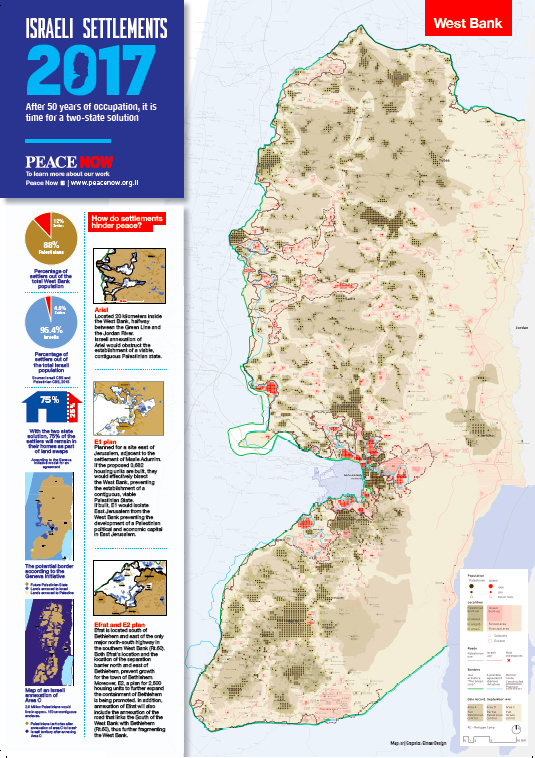 We are here to stay, forever. There will be no more uprooting of settlements in the land of Israel. It has been proven that it does not help peace. We’ve uprooted settlements. What did we get? We received missiles. It will not happen anymore…So we will not fold. We are guarding Samaria against those who want to uproot us. We will deepen our roots, build, strengthen and settle.

At the same event, Minister of Education Naftali Bennett said, “We [Israelis] shouldn’t need permits, building in Judea and Samaria should be unrestricted. The freedom to build in our country.” Bennett is a leading figure in a powerful far-right faction of the Israeli government which is pushing Netanyahu to take radical, anti-democratic positions to advance settlements and sabotage the possibility of any future peace deal with Palestinians.

As a reminder, the Israeli settlement watchdog organization Peace Now documents 131 Israeli settlements and 97 outposts in the occupied West Bank, totaling 385,900 settlers. There are an additional 208,410 Israelis living in Palestinian East Jerusalem. There cannot be a viable, contiguous, independent Palestinian state if all of these settlements remains in place.

U.S. Refuses to State a Clear Position on Settlements

Despite a Palestinian pressure campaign last week to get the Trump Administration to publicly commit to a two-state solution and a settlement freeze while in the region, the U.S. delegation came and went without articulating support for either of those baselines for negotiations.

Immediately after the negotiation team departed, Palestinian news reported that Jared Kushner – who led the delegation – told President Abbas that the U.S. cannot call for a settlement freeze because the it would lead to the collapse of Prime Minister Netanyahu’s government. A senior White House official quickly, and vehemently, denied the report as “nonsense.”

These are just the latest reports adding to the confusion and concern about the Trump Administration’s changing position on settlements. To date, the U.S. has only (and repeatedly) stated that unrestrained settlement growth is not “helpful” to the peace process. President Trump and his spokespeople have refused to comment directly on any of the major settlement announcements Israel has made since Trump took office, including the approval of the first new official settlement in 25 years (Amichai, located far beyond the separation barrier and approved as a pay-off to settlers who defied Israeli law in building elsewhere) and alarming developments in East Jerusalem.

At first the White House even declined to comment on Netanyahu’s promise to never uproot another Israeli settlement (reported above); 24-hours later, an anonymous White House official commented to the Times of Israel that, “It is no secret what each side’s position is on this issue [settlements]. Our focus is on continuing our conversations with both parties and regional leaders to work towards facilitating a deal that factors in all substantive issues.”

Several FMEP grantees and U.S. civil society organizations have put out statements on the Administration’s position:

The Times of Israel is reporting that the Civil Administration’s High Planning Committee has delayed a meeting scheduled for this week until the conclusion of the United Nations General Assembly (UNGA) session (taking place September 12-25 at UN headquarters in New York). The committee’s meeting was set to advance 3,000 settlement units first reported to be moving in June of this year. The units are expected to be advanced by the end of September, despite the short delay.

In addition, the Times of Israel report suggests Netanyahu’s government is moving to significantly shorten the settlement approval process by eliminating the number of authorizations each plan needs to obtain before being implemented.

This week, a group of Palestinians and Israeli NGOs filed a legal challenge against the first settlement to be built in the West Bank in 25 years, Amichai. The petition claims that the settlement’s location will deny Palestinians access to their own private land – land on which they depend for farming and grazing. A construction plan for Amichai was approved earlier this year as payoff to families which the government was forced to evacuate from the illegal Amona outpost. 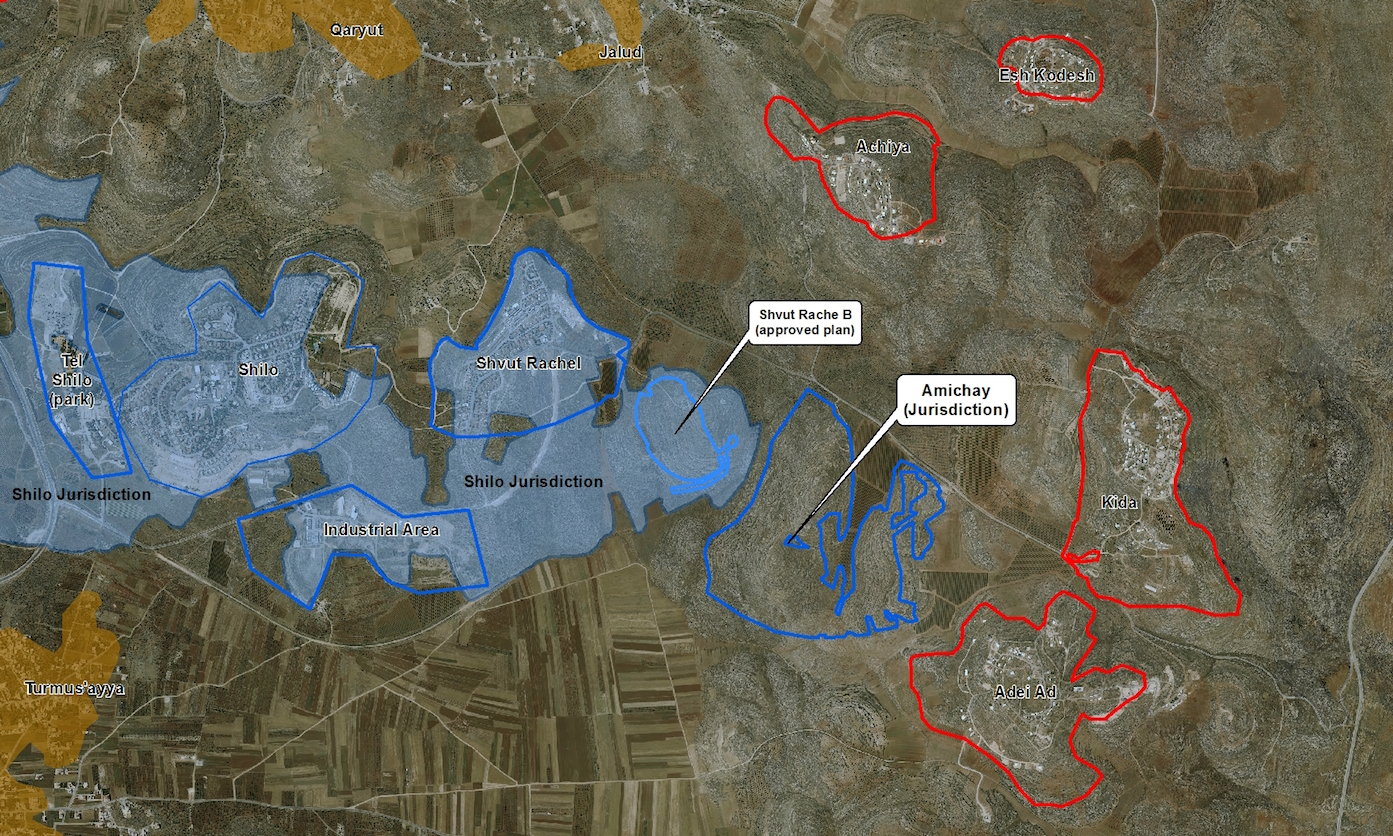 The location of the new settlement, north of Ramallah and deep in the Shilo Valley, is a brazen challenge to Israeli planning laws. Bimkom, an Israeli NGO leading the new petition against Amichai, explains that the IDF has repeatedly demolished an illegal outpost on the very same hilltop on which Amichai is being built. Alon Cohen-Lifschitz of Bimkom says, “We [Bimkom] didn’t even file petitions against the outpost. The Defense Ministry simply understood that it was illegal and acted. But now they want to establish a settlement in that same problematic area…“there was no legitimacy to establish the settlement. They [the Israeli government] rushed through the entire process without gaining the necessary permits.”

The petition might delay the construction of the new settlement for several months while the court considers and demands a State response to the petitions’ claims. Such a delay would be i addition to the problems already facing the new settlement: after getting off to a fast start, construction on Amichai stopped at the end of July due to budget shortfalls, and so far has not resumed despite reports that Netanyahu’s government is seeking to triple the government’s contribution to the project.

Settlers Ordered to Leave the Illegally-Occupied Building in Hebron, or be Evacuated

On August 27th, Israeli Attorney General Avichai Mandleblit ordered Israeli settlers to voluntarily leave the building in Hebron they have dubbed the “Machpelah House” within the week, or face a forcible evacuation. Approximately 100 Israeli settlers broke into the property and took up residence on July 25th, over five weeks ago. The Attorney General’s order has put an end date on attempts by the Defense Ministry to negotiate a peaceful evacuation.

The Attorney General’s order came as the result of a petition filed by Palestinians who say they own the home. Legal ownership of the home is a complicated, fiercely disputed matter; what is neither complicated nor in disputed is the fact that the settlers broke Israeli law when the took over the site.

Hagit Ofran, the head of Peace Now’s Settlement Watch Project, said, “It’s truly a shame that the state needs a High Court petition in order to uphold the law.”

On August 29th, Israeli Defense Minister Avigdor Liberman announced that the government had approved granting the status of an independent municipality to the loose cluster of settlements, home to around 1,000 Israeli settlers, located in Hebron’s city center. Until now, these settlements and their residents have technically fallen under the municipal jurisdiction of the Palestinian Authority while for all practical purposes operating as an enclave under full Israeli control and authority. That changed officially on Thursday, when the Israeli army signed an order to create a new municipal services administration for Jewish settlers.

Map by Mike King for the New York Review of Books

The creation of a municipal body is a major boon to the settlers, who will now enjoy far greater freedom and authority to administer their own affairs and promote their own agenda – which includes attempting to rewrite the city’s history and cultural identity to effectively erase the Palestinians – without having to deal with the Palestinian Authority.

Liberman’s decision, and the actions of the settlers, violate the 1997 Hebron Protocol signed by Arafat and Netanyahu, which divided Hebron into two security areas, H-1 controlled by Palestinians (80% of Hebron) and H-2 controlled by the Israeli army. That agreement stipulated that the Palestinian Authority would provide municipal services to all parts of the city, gave the PA control over all infrastructure, and specifically protected the Palestinian cultural identity of Hebron.

By granting an official status to the Hebron settlers, the Israeli government is formalizing the apartheid system in the city. This step, which happened immediately following the announcement on the evacuation of the settlers who took over a house in Hebron [discussed above], is another illustration of the policy of compensating the most extreme settlers for their illegal actions.

Liberman Comes Out Against Regulation Law…Because It Could Undermine Settlements

To the surprise of many, this week Israeli Defense Minister Avigdor Liberman – himself a settler – railed against the Regulation Law, which was passed by the Knesset in order to retroactively legalize Israeli outposts in the West Bank.

Why would an ardent supporter of settlements do so? Liberman’s logic is clear: he is concerned that the law will provide the basis for legalizing not only illegal construction by settlers but that it could also lead to the legalization of “illegal” Palestinian construction. Unpacking the false symmetry built into this logic, Liberman fears that this law – designed to legalize the approximately 2,000 units settlers built on private Palestinian land, making them illegal even under Israeli law, will compel Israel to also legalize the approximately 10,000 units build by Palestinians on their own private land, but without Israeli permits (it is virtually impossible for Palestinians to obtain such permits in the more than 60% of the West Bank known as Area C, that under the Oslo Accords is under full Israeli control).

Liberman also criticized unauthorized construction in settlements, which his ministry was recently tasked with cracking down on – because, he argued, the lawlessness often brings land cases before the High Court and draws more legal scrutiny to the settlements. In addition, he called the violent Hilltop Youth movement “disturbed idiots,” leading the movement’s supporters to file a criminal complaint against the Defense Minister in order to “send a message that this is not how an elected official is supposed to behave.”

Beit El Settlement Will Get a Wall & New Homes This Year

This week the Israeli Defense Ministry confirmed that it is planning to build a wall around part of the Beit El settlement, located northeast of Ramallah. According to a Defense Ministry spokesman, the wall will be built along a portion of the settlement’s western side, separating it from the Palestinian Al-Jalazoun refugee camp, “based on security needs and circumstances.” The construction does not yet have the necessary permissions, but the spokesman said he expects building to begin in the coming weeks.

Prime Minister Netanyahu has personally promised to approve 300 new housing units for Beit El by the end of September. There was significant outrage in pro-settlement quarters earlier this year, when new homes in the Beit El settlement were not included in the wave of settlement approvals that came out in July. That outrage was rewarded with the Prime Minister’s assurances that the units would, indeed, be built.

Beit El is the settlement with which current U.S. Ambassador to Israel David Friedman is most closely associated, having donated to and fundraised for prior to his appointment (in his capacity as the President of the American Friends of Beit El, reportedly from 2011 until he became ambassador). As of March 2017, Amb. Friedman’s son-in-law was still reportedly involved in fundraising for the settlement.