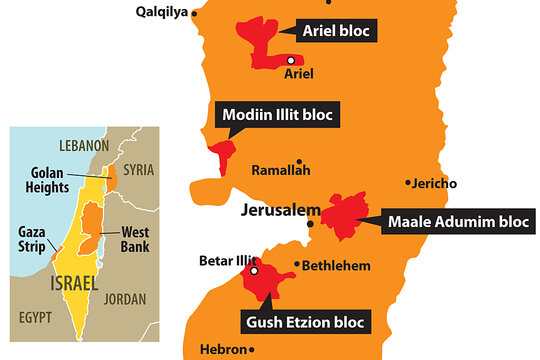 The swap in question would transfer 300,000 Palestinian citizens of Israel (living in the Wadi Ara region, an area known as “the triangle,” near Haifa) to the Palestinians, in exchange for Israel’s annexation of settlements in the Etzion bloc. The plan – which was previously championed by Defense Minister Avigdor Liberman, who even proposed it at the United Nations – is in effect a population transfer that would allow Israel to get rid of a large cluster of Palestinian cities, including the city where the two terrorists who attacked guards at the Haram al-Sharif/Temple Mount last week grew up.

FMEP President Lara Friedman commented on what message Bibi’s endorsement of this idea sends: for the current Israeli government, “citizenship of Jews is inalienable right; citizenship of Arabs is revocable privilege.”

Arab Israeli MK Aida Touma-Suliman responded to the report saying, “The cat is out of the bag and Netanyahu has shown his true colors regarding the Arab population…the [Wadi] Ara residents are not only Israeli citizens, they’re also indigenous people who dwell on their land, and are not to be compared with settlers dwelling on another nation’s land. We the Arab citizens aren’t part of any such equation and aren’t willing to pay the price again for Israel’s policy of occupation and settlements.”

When Avigdor Liberman promoted the idea back in 2014, then-President Shimon Peres said, “Israel cannot take away its citizens’ citizenship simply because they’re Arab.” Then-Interior Minister Gideon Sa’ar said, “An Israeli citizen is not an object and not transferable as part of a framework political agreement.” Netanyahu has never expressed support for the plan prior to this news report, but the plan has allegedly come up in negotiations before.

The area of settlements known as the “Etzion Bloc” is home to over 22 settlements and 75,000 Israeli settlers. The loose cluster of settlements is located south of Jerusalem, extending from the 1967 Green Line deep into the West Bank; most of the settlements are on the Israeli side of the separation barrier. The major traffic junction in the area has recently seen numerous car-ramming and stabbing attacks by Palestinians targeting Israeli settlers and soldiers in the area, including an attack today that resulted in the death of the attacker and no other reported injuries.

In tandem with the Temple Mount/Haram al-Sharif crisis is, three important bills regarding Jerusalem’s future have advanced in the Knesset:

Settlers Set Up Outpost, Seek to Expand Settlement as “Response” to Murders

Following the horrific murder of three Israelis living in the Halamish settlement, the settlement’s leaders are seeking to consolidate and expand their illegal presence in the West Bank. Within hours of the murder, hundreds of Halamish residents set up a campsite and a blockade of the eastern road leading to the settlement. The campsite is being called “Yad Ahi,” or “My Brother’s Hand” in memory of the three family members who were slain by a Palestinian youth last Friday. Settlers are rotating shifts inhabiting the campsite, aiming to make it an official outpost of the settlement and permanently close the road to Palestinians.

Halamish leaders are also demanding the government allow the expansion the settlement’s borders. A spokesman of the Binyamin Regional Council (which represents and provides municipal services to settlements in the Halamish region) called on the government to approve construction plans connecting the Halamish settlement to a nearby outpost called Tzofit, in order to “create a bigger security area and allow building neighborhoods that have already received zoning approvals.” Tzofit (also known as “Zufit” and/or “Elisha Preparatory”) is an illegal outpost that was established in 2007.

U.S. Ambassador David Friedman and Special Envoy Jason Greenblatt went to the illegal Halamish settlement this week to offer their condolences to the victims of the murder.

Halamish is located northwest of Ramallah, deep inside the West Bank. When the settlement was founded in the 1970s, Palestinian residents from the nearby towns of Deir Nidham and Nabi Saleh sued to stop the settlement’s construction, claiming it was being built on their villages’ land. The Israeli Supreme Court ruled in favor of the settlers, declaring the area to be state land. The Halamish settlement and its ever-growing encroachment on surrounding Palestinian villages has inspired weekly protests in Deir Nidham and Nabi Saleh, which has become infamous for weekly demonstrations – often involving clashes with the IDF – in recent years, often with international participation.

On the evening of July 25th — while events in Jerusalem were dominating the attention of the region and the world — 120 settlers broke into and illegally occupied a contested building near the Tomb of the Patriarchs/Ibrahimi Mosque in Hebron. The Israeli army immediately surrounded the building and on the morning of July 26th the area was declared a “closed military zone.” Prime Minister Netanyahu ordered the Defense Ministry to allow the settlers to stay as negotiations on their fate and ownership of the building continue. The Times of Israel reports that, “sources close to the prime minister said that Netanyahu was looking to avoid having to evacuate the families.” On the other hand, Yesh Atid chairman Yair Lapid called for their immediate evacuation. As of this writing, the settlers are still being allowed to illegally squat in the property.

Peace Now warned that the settler’s action can “ignite the region” and called on the government to, “follow the law and the Israeli interest and evacuate the trespassers without delay.”

J Street issued a statement calling on the U.S. government and international actors to pressure Israel to remove the settlers, saying “the Hebron settlers and their allies clearly believe that they can take​ advantage of the present crisis and push their long-term expansionist agenda by creating new ‘facts on the ground.’ It is vital that the prime minister and defense minister act in the best interests of Israeli security and uphold the rule of law by swiftly removing these families from the property.”

Hebron’s settlers have for some time been waging in a legal struggle to prove they legally purchased the building, known as the Machpela House. Palestinians contend they did not purchase it from the legal owners. While proceedings are ongoing, the settlers have once before broken into and occupied the building; when they did so in 2012, they were allowed to stay in the house for a week before being evacuated at the urging of the then-Attorney General of Israel who argued that it was necessary to preserve the rule of law.

A month after construction began on the first new settlement authorized by Israel in 25 years, the project has come to a halt – no over politics but due to insufficient government funds. The government had promised to bankroll the settlement’s construction but has not contributed to costs yet, according to the Binyamin Regional Council, which is currently footing the bill. The spokesman for the Binyamin Regional Council speculated on July 25th that the issue will be resolved quickly and expressed confidence in the government’s commitment to the project. Prime Minister Netanyahu reportedly gave orders to ensure construction is resumed quickly. As of this writing, there is no reporting to suggest construction has resumed.

Last week we reported on an impending demolition order against the Netiv Ha’avot outpost (near Bethlehem), along with the public relations efforts settlers were leading to elicit government intervention in their favor. The settlers got a helping hand this week when Israeli Education Minister Naftali Bennett and Yair Lapid (who heads the Yesh Atid political party) attended an event at the outpost. The Haaretz report suggests Bennett engaged in a conversation with the outpost’s leaders on how to “deal with” the demolition order and impending deadline.