This week the Israeli government announced the advancement of thousands of new settlement units across East Jerusalem. This includes plans inside large settlement neighborhoods like Gilo and Ramot, as well as unprecedented projects in the heart of Palestinian neighborhoods. The settlement floodgates in East Jerusalem are now officially open, and daringly so. The announcements this week will constitute the largest settlement expansion in East Jerusalem in many years, and it reveals the lengths to which this Israeli government will go to in order to increase Israeli control and claim over East Jerusalem, including changing the longstanding modus operandi governing settlement planning and construction to open new areas for construction and to build at far greater density.

For detailed reporting on the specific plans advancing this month, click to read comprehensive resources produced by: 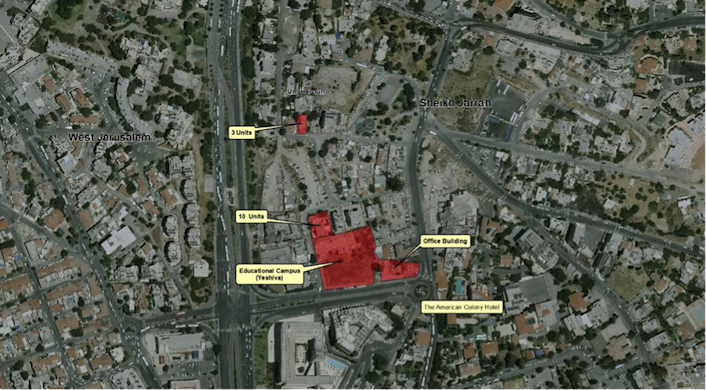 The most provocative projects (detailed extensively in all of the above resources) are in the heart of the Palestinian neighborhood of Sheikh Jarrah in East Jerusalem. Once approved, the projects will require the eviction of 5 Palestinian families. Another project, as we reported last week, will build a large yeshiva (Jewish religious school) at the entrance of Sheikh Jarrah.

The plans for Sheikh Jarrah – and many of the other plans being promoted this month – are efforts to irrevocably change facts on the ground in East Jerusalem by expanding settlement enclaves inside of densely populated Palestinian neighborhoods. These announcements are poison pills for any attempt to re-start a political process or negotiate a permanent status agreement on the contested future of Jerusalem.

Hagit Ofran, Director of Peace Now’s Settlement Watch, writes: “The [Israeli] government is brutally attempting to destroy the possibility of the two-state solution, and this time it is by establishing a new settlement at the heart of a Palestinian neighbourhood in East Jerusalem and [by] promoting nearly 1,800 housing units beyond the Green Line.”

Danny Seidemann, founder of Terrestrial Jerusalem, writes: “This is not routine, either in scope or impact. Within a period of two weeks Israel will be approving more than 1,800 settlement units – an increase of 3.3% of all of the settlement units built in East Jerusalem since 1967.”

Betty Herschman, Director of International Relations & Advocacy at Ir Amim, writes: “The simultaneous lack of restraint in the Historic Basin through the revival of plans in Sheikh Jarrah is of paramount concern – signaling, as it does, the government’s continued determination to exert its sovereignty over the Historic Basin in advance of prospective negotiations.”

Following Israel’s announcement on Wednesday approving 800 units in East Jerusalem – the first East Jerusalem construction announcement under the Trump administration and just the first tranche of units expected to advance this month – the White House gave a statement to the press reiterating its policy on Israeli settlement activity. The statement reads, “unrestrained growth does not advance the prospect for peace,” adding, “at the same time, the administration recognizes that past demands for a settlement freeze have not helped advance peace talks.”

The statement suggests that the U.S. will likely not exert meaningful pressure on Israel to hold back on settlement growth, even in the most contentious areas in East Jerusalem.

Israeli law currently forbids settlement construction on land recognized by Israel as “privately owned” by Palestinians (all settlement construction is illegal under international law). Despite the prohibition – and despite the fact that it is very difficult for Palestinians to get Israel to recognize their private ownership of land – the Israeli government and settlers have built on lands that even Israeli law recognizes as privately owned by Palestinians.

In an effort to find a fix to this problem that does not involve respecting the rule of law and the legal rights of Palestinians as landowners, last year the Attorney General brought up a 1967 government special order entitled, “Order Concerning Government Property.” That document says, in part, that settlers who bought land from the Israeli government believing that it was land the government claimed was “state land” should not face penalties, even if the land turns out to be privately owned by Palestinians.

Late last year, AG Mendleblit recommended using this special order to retroactively legalize illegal settlement construction, while simultaneously warning the government against passing the Regulation Law, which gives license to the Israeli government to legalize all illegal settlement construction and land seizures (it passed into law anyway). Mendleblit warned that the Regulation Law was unconstitutional, and suggested the 1967 special order as an alternative legal avenue to accomplish the same goal. Peace Now currently has a petition before the High Court of Justice challenging the constitutionality of the Regulation Law.

Last week we reported on ongoing controversy over building projects in the Beit El settlement, which in June Netanyahu had blocked from advancing. The subsequent tantrum thrown by settler leaders’ won a promise from Netanyahu that 300 settlement units will be built in Beit El by September 2017.

Not taking the PM at his word – or, as likely, seizing an opportunity to score more pro-settlement political points – far right-wing MK Bezalel Smotrich (Bayit Yehudi) introduced a bill last week that would force Netanyahu to build the units. That bill was scheduled to come up for vote this week, but Netanyahu intervened to prevent the bill from being considered. This does not mean Netanyahu will continue to block the Beit El plan as it moves through the normal settlement planning process governing Israeli construction in the West Bank (the plan is in the final stages of the approval process).