A recent Haaretz report revealed that, more than a year ago, the Israeli Justice Ministry transferred authority over East Jerusalem absentee property cases to a division within the Justice Ministry headed by radical Israeli settler leader Hananel Gurfinkel. According to the report, over the course of the time Gurfinkel has been responsible for the East Jerusalem portfolio, the Justice Ministry has significantly increased its cooperation with nonprofit settler organizations to evict Palestinians and transfer the property to Israeli Jews – particularly in the Silwan and Sheikh Jarrah neighborhoods. The responsibility was transferred from the “Unit for the Location and Restitution of Unclaimed Property” in the Administrator General’s Office, to the economic unit, which Gurfinkel has lead for many years.

Gurfinkel lives in the Nof Zion settlement enclave, located in the Jabal al-Mukaber neighborhood of East Jerusalem (Nof Zion is set to triple in size, btw), and has a history of leading efforts to evict Palestinians from East Jerusalem and to replace them with Israeli Jews. Back in 2016, while serving in the Administrator General’s office he reportedly founded ”Building Jerusalem,” a nonprofit organization dedicated to combating the “Arab conquest” of Jerusalem. In that time he has also been elected to the central committee of the right-wing Habayit Hayehudi political party.

With Gurfinkel in charge of the Administrator General’s East Jerusalem property cases, the office has drawn much criticism, particularly around its decision to hire attorney Moshe Segal to represent the government in property disputes against Palestinians. Segal was reportedly hired without going through a competitive bidding process, as required for government contracts. Even more alarming, Segal provides legal representation to two of the most aggressive settler groups active in East Jerusalem – Elad and Ateret Cohanim – which regularly petition the Administrator General to evict Palestinians and award property rights to Israeli Jews. Segal representation of these clients appears to pose a blatant conflict of interest.

After initially – and bizarrely – denying that Segal works for the government, the Justice Ministry defended Segal’s hiring and dismissed the idea that there might be a conflict of interest, saying “the administrator general and attorney Segal do not represent opposing positions” (suggesting with remarkable honestly, that it is the official view of the Ministry that the positions of the settler organizations and the government are indistinguishable). The Justice Ministry further defended its operations, saying in part:

“The handling of assets managed by the administrator general division were transferred to the economic unit … as part of a structural change and based on the giving of additional tasks to the Unit for the Location and Restitution of Unclaimed Property…The administrator general division manages the property of private owners all over the country and is obligated to act for their benefit, including handling suits against trespassers. The division has no separate policy concerning management of property located in one region or another.”

The Haaretz Editorial Board issued a blistering response to their paper’s breaking news, saying that assigning such authorities to Gurfinkel is “crooked, improper, and possibly illegal.”

On March 12, the Israeli High Court of Justice finally issued a ruling to evict nearly 100 Israeli settlers who have been squatting in a disputed property in Hebron, after having broken into the building nearly seven months ago. Since first ordering them to leave the site in October 2017, the High Court has repeatedly agreed to delay the evacuation, pending various appeals. Since then, the settlers have repeatedly petitioned the Court for delays and comprises, all of which the High Court has rejected.

Peace Now told The Times of Israel that the government should “show zero tolerance for any further attempts to postpone the evacuation” and that hopefully “this time the invaders will honor the court and evacuate without violence and without unnecessary dramas.”

The property, which the settlers have named “Beit Machpelah” (Palestinians call it the “Abu Rajab House”) sits across the street from the historic religious site known as the Tomb of the Patriarch to Jews and the Ibrahimi Mosque to Muslims. Palestinians claim it is owned by the Abu Rajab family, while settlers claim the property was legally purchased. When the settlers broke into the property, the Israeli army protected their presence there (allowing them to freely enter and exit the property) and declared the area a closed military zone to keep Palestinians away from the settlers. The army also failed to protect Palestinians from the settlers, some of whom are violent, squatting there. In a recently published report, the United Nations High Commissioner for Human Rights addresses the case of the disputed property (page 4 and 6), documenting several incidents of settler-violence resulting in hospitalization and slamming the IDF for not intervening, and in once case arresting Palestinians who were the victims of the settlers’ stone-throwing.

According to a report by Al Jazeera, the Israeli army entered the Palestinian town of Burin in an effort to inform its leaders that Israel intends to confiscate a parcel of land in the city that is currently the site of a local secondary school. IDF soldiers reportedly said that the land is being confiscated for “security reasons.” According to Yahia Kadous, who is the head of Burin, Israel has already seized much of the land around the school, and the latest decision is a continuation of Israel’s incremental annexation of land on the village’s periphery. 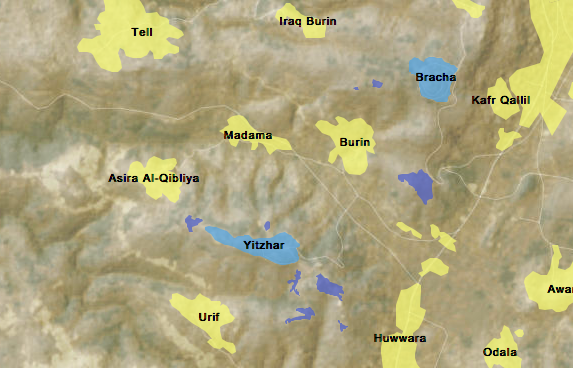 Burin is a Palestinian town just south of Nablus, near the notoriously violent Israeli settlement of Yitzhar. Settlers, mainly from Yitzhar, have launched a string of attacks on the Burin and other surrounding villages over the past year. The Israeli NGO Yesh Din has documented 20 incidents of settlers throwing stones at Burin residents and houses over the past six months alone. As is often the case across the West Bank, the IDF stands idly by as settlers attack, and in some cases the IDF enters Burin to disperse counter-protests – deploying tear gas canisters and stun grenades. In early March, a Yesh Din video showed Israeli soldiers invading Burin and firing a tear gas canister at a Palestinian couple and their infant who were fleeing their home as the soldiers approached.

In response to the constant violence and the IDF’s abdication of responsibility, Yesh Din has launched a campaign seeking to compel the IDF to do more to stop the attacks on Burin. Yesh Din unveiled the campaign, writing:

“The residents of Burin and surrounding villages are thus repeatedly impacted not only by the violence of settlers, but also by the violence of the Israeli security forces, whose task it is to provide protection for the Palestinians. This reality must and can be prevented. Yesh Din has launched a public campaign calling for an immediate end to settler harassment in the Yitzhar area including settler trespass into the village and fields of Burin. The campaign calls upon the Head of the Central Command in the Israeli army to fulfil his duty to protect Palestinians and prevent offences from being committed against them by Israeli civilians. We demand that the Israeli authorities investigate and bring the Israeli perpetrators to justice.”

B’Tselem Report: “Life Under the Shadow of the Beit El Settlement”

In a new publication, B’Tselem documents the detrimental impact that the Beit El settlement has had on 14,000 Palestinians living in the nearby al-Jalazun refugee camp. As a reminder, U.S. Ambassador David Friedman served as President of American Friends of Beit El, and on his watch the organization raised major funding to support the settlement. 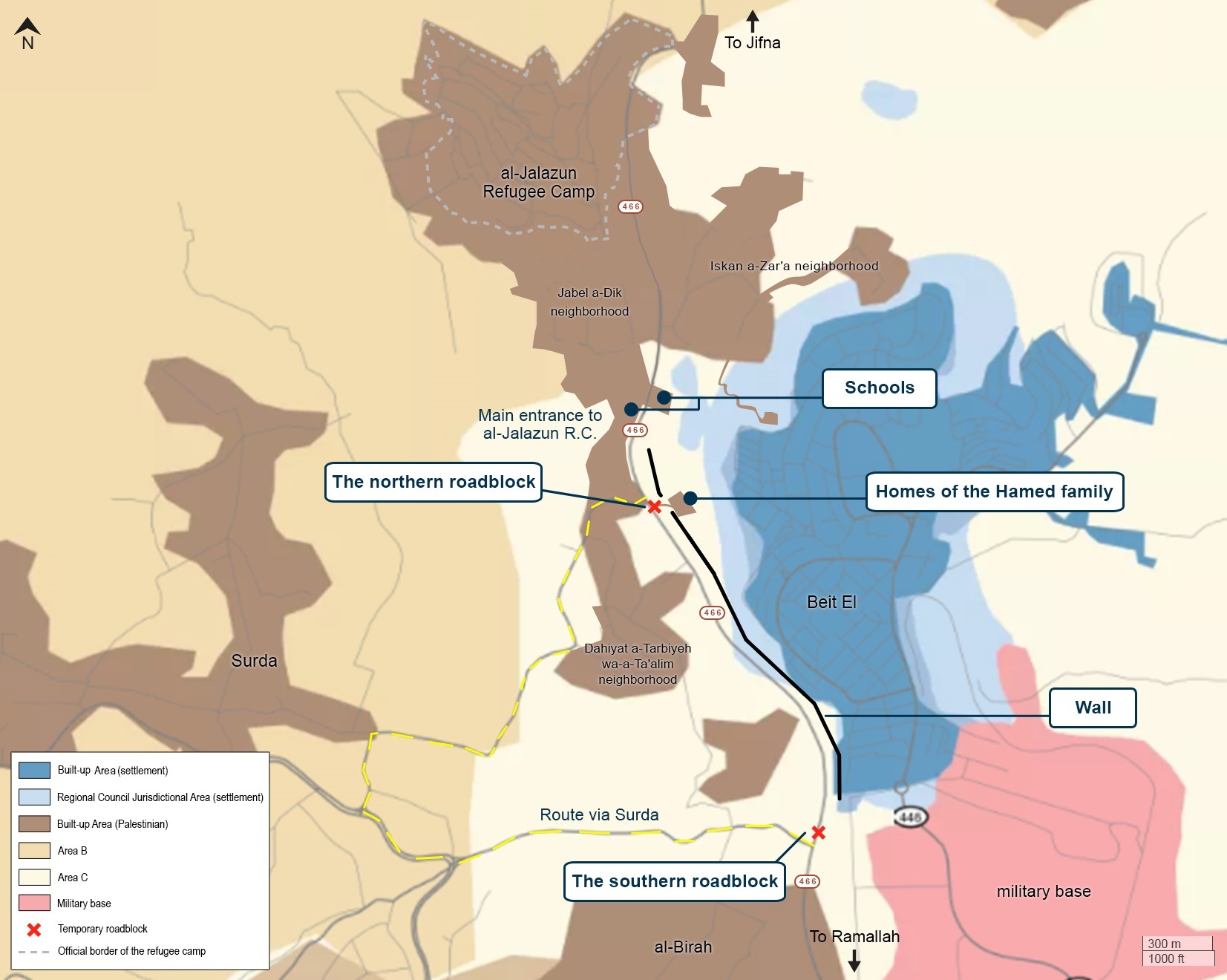 The Israeli army frequently denies al-Jalazun residents the right to use roads near Beit El, which severely restricts their ability to commute to jobs or seek medical treatment, or to simply go about their lives unmolested. Additionally, the Beit El settlement successfully lobbied the Israeli government to build a massive separation wall between the settlement and the refugee camp, a wall which has cut-off one Palestinian family from the camp.

B’Tselem compiled numerous testimonies from residents of al-Jalazun refugee camp that shed light on how such severe infringements on freedom of movement have impacted their daily lives. On resident, Muhammad Safi, said:

“Life here has become unbearable. If it happened once a year, or even once a month, I might have been able to live with it, but for months it happened here every day and it was unbearable. The humiliation, the anxiety, the fear I and other taxi drivers working this route feel all the time can make a person sick. I’m thinking about looking for other work, but there aren’t too many alternatives. I pray to God to make it better for us.”

“Settlements Are A War Crime”: UN High Commissioner Weighs in on 2017 Settlement Activities

The United Nations High Commissioner for Human Rights recently submitted the annual report tracking the expansion of Israel settlements, documenting activities from November 2016 through October 2017. The report covers a lot of ground — documenting and condemning Israeli activities in Area C of the West Bank, legislative initiatives concerning Jerusalem, discriminatory planning and zoning practices, home demolitions and evictions, the role of Israeli security forces, an increase in settler violence, and instances of collective punishment. It also reiterates that all Israeli settlements in occupied territories are a war crime under the Fourth Geneva Convention.

In a key section describing how many of these policies create what the report calls a “coercive environment” that amounts to a population transfer, the report says:

“Forcible transfer does not necessarily require the use of physical force by authorities; it may be triggered by specific factors that give individuals or communities no choice but to leave, amounting to what is known as a ‘coercive environment’. Any transfer without the genuine and fully informed consent of those affected is considered forcible. Genuine consent to a transfer cannot, however, be presumed in an environment marked by the use or threat of physical force, coercion, fear of violence, or duress (A/HRC/34/38, para. 28; A/HRC/34/39 para. 41). Human rights, such as the rights to freedom of movement, privacy and family life, in addition to economic, social and cultural rights (A/HRC/16/71, para. 24), are usually violated within the context of forcible transfer.”