According to anonymous sources, Israel and the U.S. are in discussions regarding Israel’s annexation of the Ariel, Ma’aleh Adumim, and Etzion “settlement blocs” shortly after the upcoming Israeli elections, scheduled for April 9th. The Times of Israel report suggests that officials are discussing a scenario where Netanyahu could move to unilaterally annex those areas – or promise to annex those areas in order to shore up right-wing support during the election – with “some degree of American backing.” [Note: The term “settlement bloc” generally refers to loose groupings of settlements, usually but not always along the Green Line or separation barrier. However, since the term has no legal or formal definition, its meaning is elastic and constantly expanding.]

Attention to Israel’s possible (and increasingly likely) formal annexation of territory in the West Bank (some or all) has caught a strong tailwind from the U.S. recognition of Israel’s annexation of the Golan Heights – which President Trump first tweeted and then formalized by signing a declaration while Netanyahu was by his side at the White House on March 25th. Celebrating the new U.S. acceptance of annexation, Netanyahu said outright:

“Everyone says you can’t hold an occupied territory, but this [U.S. recognition of Israeli sovereignty over the Golan] proves you can. If occupied in a defensive war, then it’s ours.”

“Still, Mr. Netanyahu’s argument reflected how much the diplomatic context for the Israeli-Palestinian conflict has shifted. With the Trump administration unilaterally acting in defiance of longstanding international consensus on the status of Jerusalem, Palestinian refugees and now the Golan Heights, it has become possible to speak openly of annexing the West Bank in a way that was not considered acceptable a few years ago.”

The signing took place during the course of the annual AIPAC national policy conference – where U.S. Ambassador to Israel David Friedman delivered a speech seeming to urge Netanyahu to quickly seize the opportunity for West Bank measures while Trump is in office. Friedman said:

Commenting on Friedman’s speech, an American source told The Times of Israel:

“the next [Trump] tweet will be to recognize Israel annexing the settlement blocs.”

At a meeting convened on March 27th,  14 of 15 members of the United Nations Security Council made speeches condemning Trump’s recognition of Israeli sovereignty over the Golan (the U.S. was the lone supporter). The five European countries that who sit on the the council (France, Germany, Poland, Britain, and Belgium) issued a joint statement criticizing the U.S. declaration and noting the dangerous message it sends regarding West Bank annexation. The statement reads:

“In line with international law, and relevant Security Council resolutions, notably Resolutions 242 and 497, we do not recognize Israel’s sovereignty over the territories occupied by Israel since June 1967, including the Golan Heights, and we do not consider them to be part of the territory of the State of Israel. Annexation of territory by force is prohibited under international law. Any declaration of a unilateral border change goes against the foundation of the rules-based international order and the UN Charter. We raise our strong concerns about broader consequences of recognizing illegal annexation and also about the broader regional consequences.” 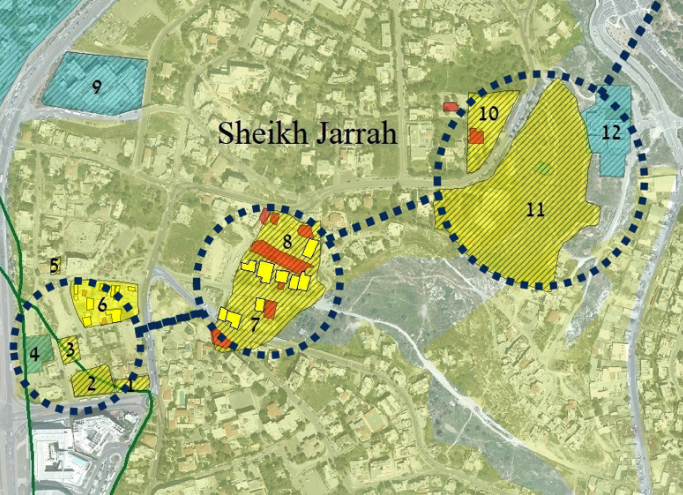 Map by Ir Amim. The section refers to area #6 on the map.

Ir Amim reports that on March 19th, the Jerusalem Planning & Building Committee give final approval to two plans for a total of 13 new settlement units in the Sheikh Jarrah neighborhood of East Jerusalem.

The planning for these units was previously fast-tracked by the committee in December 2018, and because the plans were initiated by private parties (the settlers), the plan will not have to go through the public tender process, meaning that building can start quickly. The last thing delaying construction is the court proceedings to evict five Palestinian families who live in a building that the plan calls to demolish.

“These are two of the plans that were unfrozen in the surge of 2,000+ plans promoted in the summer of 2017, which also saw the Shemasneh family eviction. In Um Haroun, some 45 Palestinian families are living under threat of eviction. There are at least nine families with eviction cases pending in court and an additional five that have received warning letters attached to eviction claims. Two families have already been displaced and their homes taken over by settlers. City Councilor Arieh King has promised to put 400 new families on the ground in Sheikh Jarrah in the next 10 years.”

Ir Amim reports that on March 25th, the Jerusalem District Planning and Building Committee revisited a plan for a zipline park project in East Jerusalem promoted by the radical settler group Elad, for which the committee had already issued a building permit to Elad in March 2018. 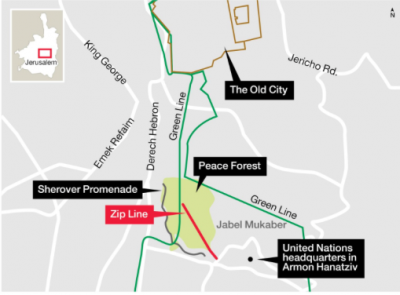 As FMEP reported last year, the process by which the committee issued the building permit was highly unusual — and, it turns out, illegal because the area in question is designated as a forest in Israel’s master plan for national forests. In hopes of finding a legal path around the national forest master plan, the Jerusalem Municipality stepped in to submit a request to the Jerusalem District Planning and Building Committee to designate the area as an “open public space” (which would allow building).

“The request was submitted by the Jerusalem Municipality, creating the appearance of a legitimate municipal initiative as opposed to a settler promoted plan while signaling municipal backing of Elad.”

If the project is implemented, it will be Israel’s longest zipline – coming in at 2,570 feet – and will travel over the Palestinian neighborhood Jabal al-Mukaber. The zipline will connect two popular tourist sites in Jerusalem, the Armon Hanatziv promenade and the Peace Forest in the Abu Tor neighborhood.

“The privatization of project management to nationalist settler organizations enables the Israeli government to exploit tourism as a tool for reinforcing settlement initiatives in the Old City and its environs, erasing the significant Palestinian presence there, promulgating the idea of the entire area as an Israeli environment, and imposing a nationalistic Israeli character that blurs the multi-religious and multi-cultural nature of the space, primarily to the detriment of the Muslim sites and presence. Ultimately, this use of national parks and tourist sites serves the goal of transforming the Palestinian neighborhoods in and around the Old City – including Silwan, A-Tur, Ras al-Amud and Sheikh Jarrah – from a densely populated Palestinian area into one sprawling tourist site that bolsters Israeli control of the area and access to it.”

Ir Amim published updates to its 2019 map of Jerusalem of the settlement ring around Jerusalem’s Old City, along with detailed, comprehensive notes.