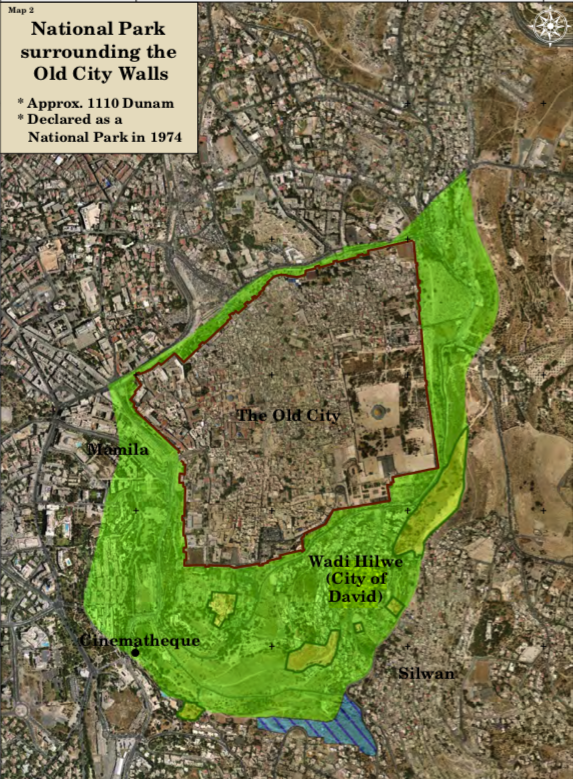 Ir Amim reports that the Knesset has advanced an amendment to the National Parks, Natural Reserves and Memorial Sites Law – last considered in July 2018 – that will allow the Elad settler group to build settlement units in the Wadi Hilweh section of the Silwan neighborhood in East Jerusalem, in an area which Israel previously declared the “City of David National Park.” On November 15th, the proposed amendment (Amendment 17) entitled, “Planning for Housing in an Existing Neighborhood in a National Park,” was moved to the Knesset Interior Committee in preparation for a combined second and third reading, after which it will become law.

If passed into law, the amendment will create a custom made exception that exempts the City of David National Park from longstanding prohibitions against building inside of national parks. Elad has managed the “park” since 2001 on behalf of the Israel Nature and Parks Authority. In Haaretz, Ir Amim’s Director of International Relations & Advocacy, Betty Herschman, explains:

“Elad is not an environmental group or an archeological authority; it has no professional capacity to even compete for a bid to manage a national park (had there been a transparent tender process, which there was not). It is, though, a right-wing settler group. Elad is the only entity promoting this bill. Faced by objections from a spectrum of green groups, the group lobbied for a custom-made exemption to fit the City of David alone to push out Palestinians and permit building homes for settlers in a national park. That by itself should demonstrate Elad’s unfitness for running such a space. Amendment 17 is specifically designed to enable Elad to expand its foothold in Silwan where, backed by the state, it has seized roughly 75 Palestinian homes over the last several decades. The latest eviction took place last week.”

“Promotion of this [bill] lays bare the political drivers behind national park planning and development in East Jerusalem, an integral part of a larger settlement enterprise. National parks have become an effective tool for the state, working in cooperation with private bodies, to transfer administration and development powers for public, touristic, archaeological and educational projects into the hands of private right wing organizations; in so doing, enabling the Israelization of the Old City and surrounding band of Palestinian neighborhoods.”

For more information on the role on national parks around Jerusalem in advancing the Israeli settlement agenda in Palestinian neighborhoods, see Ir Amim’s reporting here; for a comprehensive survey and analysis of national parks in Jerusalem/East Jerusalem, see Bimkom’s report here. 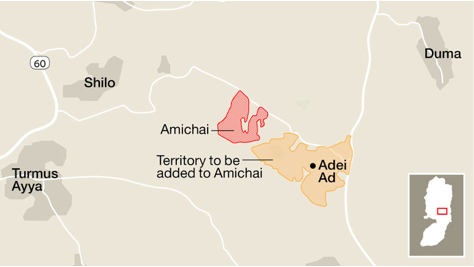 A new Ynet report underscores the ideological significance of the Israeli government’s decision to approve plans for the first new government-backed settlement in 25 years, Amichai, which is currently under construction deep in the Shilo Valley.

As a reminder, Amichai is one of two new settlements the government promised as a pay-off to Israeli settlers who were forcibly removed from the unauthorized Amona outpost, following a High Court order (an order the government tried to avoid enforcing). The plans for the Amichai were originally approved in April 2017;  in August 2018, the Israeli government approved another plan that massively expanded the municipal borders of the Amichai in order to annex several outposts – including the notorious and expansive Adei Ad outpost – to the settlement, expanding its footprint three-fold.

“Some three years before the evacuation of [the unauthorized outpost of] Amona, a group of us residents were sitting in the office of the Defense Ministry’s legal advisor, Ahaz Ben Ari, in the Kirya IDF base in Tel Aviv. To our west was the Mediterranean Sea, to our east were the mountains of Judea and Samaria. Ben-Ari looked east and said, ‘You do realize you’re living there temporarily, right?’ We asked him what did he mean—’you’re talking about our homes, our lives.’ He answered, ‘The international community won’t let us stay there forever.’ I told him someone greater than us (Israel’s first prime minister David Ben-Gurion) once said, ‘What matters is not what the goyim say, but what the Jews do.’ And we said goodbye. This is the common view among the Israeli bureaucrats who decide and run things. This is the view that uses life in Judea and Samaria as a bargaining chip on the way to an arrangement with the Palestinians. Life in Judea and Samaria is put on hold. That is why the construction is only done within the confines of the separation barrier.

So the establishment of Amichai [beyond the separation barrier] is an internal statement to the bureaucrats as well as one to the international community that we’re done with just maintenance, and we’re moving forward by building a new community in the heart of the land. And not just a new community is being built, but this community is legalizing all of the smaller communities in the area. We’re leaving the confines of the separation barrier and building a community that completes the corridor of Jewish settlement from the beach in Tel Aviv to the Jordan Rift Valley. It nullifies the possibility of establishing an Arab state at the back of the mountain. And this isn’t my own personal statement, but a statement made by the prime minister and the entire Israeli government that voted unanimously to establish Amichai, a statement by the State of Israel.”

Want to Track Settlements? There’s an App for that

Americans for Peace Now has released a new and improved version of Facts on the Ground, APN’s smartphone app that gives users the ability to track, explore, and gain a comprehensive understanding of the settlements.

“Originally released in 2010, APN’s Facts on the Ground was the first-ever interactive online map of West Bank settlements. The new version features up-to-date statistics and data, including individual “snapshots” of every settlement and outpost in the West Bank. The app includes informational video, a comprehensive glossary, and a new, expansive statistics section from Peace Now. Facts on the Ground also marks the re-launch of APN’s Settlements in Focus publication. New issues, each profiling different West Bank settlements, will be featured on the app and available to all users.”