Two weeks into a hunger strike led by settlers demanding government funding for security and infrastructure projects, on November 6th Israeli Prime Minister Netanyahu delivered a check for $57 million (USD) to fund the fortification of settler-only bypass roads in the West Bank. Peace Now has detailed reports on the five bypass roads, four of which service settlements deep inside the West Bank at the acute expense of Palestinians, that are part of Netanyahu’s promise to improve security infrastructure for the settlers over the next two years.

The payment is, in principle, advance installment on a $939 million budget Defense Minister Liberman has promised for settler security projects through 2019. Under escalating pressure from settlers who have lost family members in attacks, n Oct. 25th Netanyahu had promised that $228 million of the funds would be invested in 2018. Unsatisfied with that commitment, settlers launched a hunger strike – producing $57 million in immediate results.

Israel has begun clearing nearly 2,200 landmines from West Bank land near the Karnei Shomron settlement in preparation for building 1,200 new units. Deputy Defense Minister Eli Ben-Dahan said that the new units will bring “a million Jews who will live in Judea and Samaria in the future.” 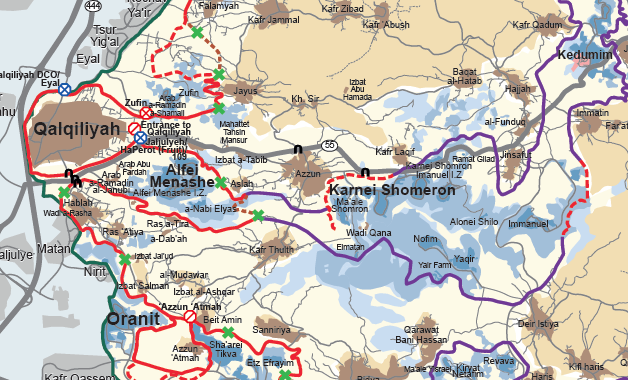 The Karnei Shomron settlement is located east of Qalqilya, a large Palestinian city that is literally surrounded on three sides by Israel’s separation barrier. A checkpoint restricting the town’s only outlet to the West Bank and the separation barrier cuts the village off from its historic agricultural lands. Earlier this year, settler leaders and the Knesset killed a plan promoted by PM Netanyahu and Defense Minister Liberman to permit the construction of 14,000 new homes in Qalqilya for Palestinians.

Israel has repeatedly confiscated land between Qalqilya and Karnei Shomron by declaring it as “state land.” In January 2016, Israel expropriated 104 dunams from Qalqilya in order to build a bypass road to Karnei Shomron. In November 2015 Israel seized 30 dunams of land near Karnei Shomron in order to retroactively legalize settlement structures built there previously. The 2015 declaration was the first time in over a year that Israel used the maneuver to expropriate land.

Landmines are buried across the West Bank, many being relics of pre-1967 conflicts. This mine-clearing effort, explicitly designed for the expansion of a settlement, is the first-ever governmental effort to address the issue since 1967. Indeed, mine-clearance experts note that “Clearance in the West Bank is largely constrained by political factors, including the lack of authorization granted by Israel for Palestine to conduct or oversee mine clearance operations.” They also note that the impact of these mines is substantial – specifically:

In addition to posing a risk to civilians, mines affect the socio-economic development of Palestinian communities. All mined areas are located in, or close to, populated areas, mostly on privately owned agricultural and grazing land or along roads used daily by communities; and are either poorly marked or not marked at all. Yet they are accessible to the population, and in some cases, are even under cultivation.

The Israeli Education Ministry established and funds a non-governmental organization located in an unauthorized outpost known as ”Hill 387,” located near Maale Adumim. The ostensible purpose of this NGO, known as “Jewish Shepherd,” is to rehabilitate the so-called “Hilltop Youth” — extremists who themselves are responsible for erecting illegal outposts. This week, Haaretz reporting revealed that the state-funded group has launched a petition to have the Hill 387 outpost retroactively legalized, even as the constitutionality of such moves are being challenged in the Israeli High Court.

The Hill 387 outpost is currently facing demolition orders against its structures and access road – orders that the Civil Administration (the organization that is effectively the Israeli sovereign body in the West Bank) has not yet mplemented. The outposts’ structures were all built without permits, against Israeli law. Dror Etkes, founder of the anti-settlement monitor Kerem Navot, provided the Civil Administration with aerial photos showing that the access road leading to the outpost was built on land owned privately by Palestinians.

The three proposals to alter the borders of Jerusalem (details here) were the subject of a special Knesset hearing this week featuring Ze’ev Elkin, the Israeli Minister of Jerusalem Affairs. Elkin authored one of the bills under consideration (his version would require a supermajority in the Knesset to approve any deal that cedes land in Jerusalem to a foreign power – almost certainly blocking any future peace agreement).

During the hearing, Elkin backed a second Jerusalem bill that would, in effect, cut some Palestinian neighborhoods out of Jerusalem and place them under a new Israeli municipality, separated from the city by the Israeli barrier. This ethnic gerrymandering would decrease the Palestinian population of the city. Elkin argued these bills are the best way to handle the “demographic challenge” the Palestinian population poses to preserving a Jewish majority in Jerusalem.

Netanyahu Takes His Case for Settlements to London

During a week of anniversaries – the 100th anniversary of the Balfour Declaration and the 22nd anniversary of the assassination of Yitzhak Rabin – Netanyahu once again vowed to protect Israeli settlements from future evacuation or any other demands of a peace deal.

In his speech at the venerable Chatham House, while celebrating the Balfour Declaration in London, Netanyahu said that removing Israeli settlers from the West Bank would constitute “ethnic cleansing.” This is not the first time Netanyahu has employed this argument; writing a year ago, FMEP’s Lara Friedman took apart the “ethnic cleansing” argument here.

Netanyahu’s speech also challenged the conception of sovereignty, positing that Palestinians can only be given a state with something less than full sovereignty. He said, “it’s time we reassessed whether the modern model we have of sovereignty, and unfettered sovereignty, is applicable everywhere in the world.”

In an interview with the BBC, Netanyahu called settlements a “side issue” and dismissed the idea of a one-state solution. When asked if he supports full sovereignty for a Palestinian state, Netanyahu quipped vaguely, “I think they should have all the powers to govern themselves and none of the powers to threaten us.”