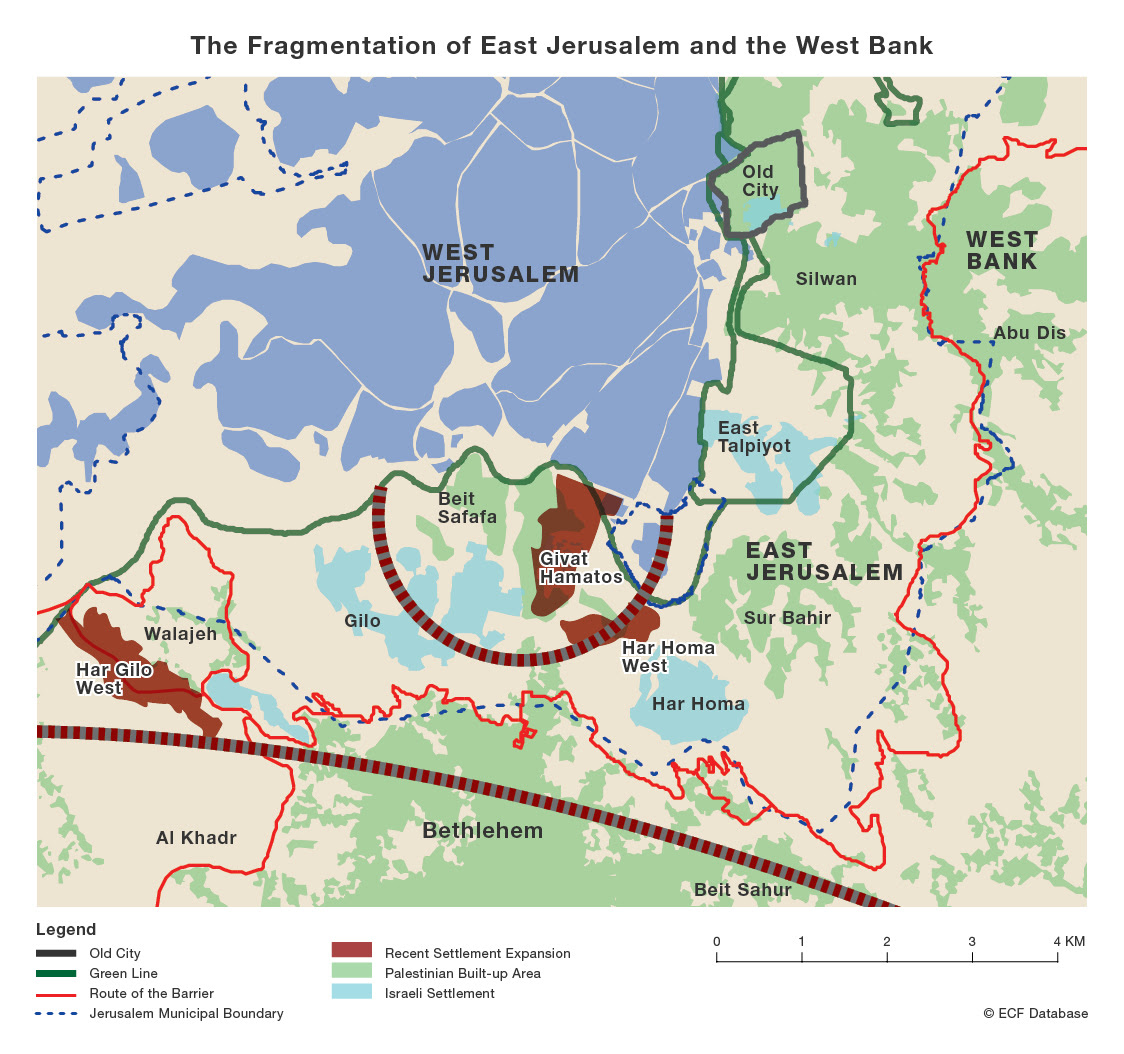 On April 7th the Jerusalem Local Planning Committee advanced a plan to build 540 new units in what is framed as an expansion of the Har Homa settlement in East Jerusalem. However, the new units will be built in an open area –  non-contiguous with the current built-up area of Har Homa – between the Har Homa settlement and the site of the planned Givat Hamatos settlement, tenders for which were issued in January 2021. Meaning that the new construction is more properly understood as a new settlement – called Har Homa E (and sometimes called Har Homa West) – and is a significant step towards completing a ring of Israeli settlements on Jerusalem’s southern edge, and encircling the Palestinian neighborhood of Beit Safafa.

“Along with Givat Hamatos, construction of Har Homa E will serve as another step in linking the existing Har Homa and Gilo neighborhoods/settlements to create an Israeli sealing-off effect along the southern perimeter of East Jerusalem. This will fracture Bethlehem and the southern West Bank from East Jerusalem, while isolating the Palestinian neighborhood of Beit Safafa and depleting the remaining land reserves for further development of the neighborhood. If carried out, these measures will constitute a major obstacle towards the future establishment of a contiguous independent Palestinian state with a capital in East Jerusalem.”

“The plan’s advancement is a worrying sign for those who believed that the change in power in the United States would force Israel to restrain settlement construction.”

As of publication of this FMEP update, the Biden Administration has not issued a comment on the advancement of the Har Homa E plan.

“because the land in question is not state land but rather belongs to private Israeli landowners who claim to have purchased it, the plan’s final approval does not require a tendering stage in order for construction to begin.”

The Har Homa E plan provides the constriction of several highrise buildings – two 30-floor towers and three 12-floor buildings – in addition to a large public green space, a new road, spaces designated for future public buildings, and another open space for the preservation of an ancient aqueduct.

In the pre-dawn hours of April 8th, Israel security forces escorted 15 settler families affiliated with the Ateret Cohanim organization as they moved into three buildings in Silwan, a Palestinian neighborhood in East Jerusalem in the shadow of the Haram Al-Sharif/Temple Mount. The buildings are specifically in the Yeminite quarter of Silwan, where Ateret Cohanim is waging a campaign to take over more and more land and property largely (but not entirely) based on the revival of an old Yemenite land trust.

According to Haaretz, a member of the Palestinian Abu Dihab family, which owned the three buildings, sold them to the settlers; having gained control of the properties, Ateret Cohanim renovated the buildings to accomdate at least 16 total units. The family has issued a statement condemning that member for selling the properties to settlers.

The data also shows that Israel sharply increased the issuance of expedited demolition orders under Military Order 1797, using this military order for 19 demolitions in 2019, and for 134 demolitions in 2020. This data underscores the discriminatory nature of Israel’s policy of expedited demolitions of new structures under Military Order 1797, and the discriminatory manner in which Israel is exercising this extraordinary new power (that it granted to itself in 2018). As a reminder: Military Order 1797 empowers Israel to summarily demolish buildings within 96 hours of the issuance of a demolition order, and all but eliminates any legal recourse for Palestinians.

“[Israel] is failing in its job to provide protection to protected communities and residents, and undermines basic human rights, like the right to a roof over one’s head. Tens of thousands of demolition orders and thousands of demolitions aren’t enough for the regime; it chooses to circumvent the law by creating new orders that allow homes to be demolished within a few days, without allowing for the defense of rights. This selective enforcement does deep and broad harm almost exclusively to the most sensitive Palestinian population – the shepherding community.”

In a vote scheduled for April 11th, the Board of the Jewish National Fund (known as the JNF-KKL in Israel) is expected to approve the adoption of a policy to officially make the purchase of land in the West Bank a part of the group’s mission. Ahead of the formal vote, a coalition of liberal Zionist groups threatened to boycott the JNF if it formalizes its policy on set. The letter was signed by 24 organizations and 7,000 individuals.

As FMEP has previously reported, if this new policy is indeed adopted, the JNF will officially make financing the Israeli settlement enterprise a loud-and-proud part of its mission. This would be a shift not so much in policy as in public relations, given that the JNF has long worked in support of settlements, but until this point has left settlement-related activities deliberately obscured. The shift in approach that will culminate in Sunday’s vote is in line with the JNF’s new right-wing, settler leadership (which effectively took control of the organization in October 2020).

According to a February 2021 report, the proposed JNF policy – which could see hundreds of millions of dollars invested in the settlement enterprise – includes directives for the organization to purchase land subject to the following conditions: