Cashing In Before Trump Cashes Out, PART 1: Israel Awards Tender for the Construction of Givat Hamatos 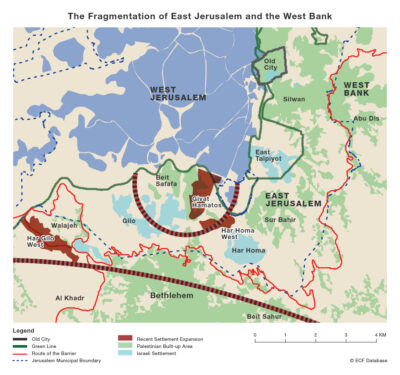 On January 19th, the Israel Land Authority issued the tender for the construction of the Givat Hamatos settlement in East Jerusalem (the tender is for a total of 1,257 settlement units). The issuance of the tender came a mere 6 hours before Joe Biden was sworn in as the President of the United States.

Prior to the issuance of the tender, the Jerusalem District Court rescinded its injunction against the tender, which the Court had issued last week in response to a petition filed by Palestinian residents of East Jerusalem and the Israeli NGO Ir Amim. That petition – which alleges that the planned construction of government-subsidized housing has discriminatory eligibility guidelines – is still pending, and the Court scheduled a discussion of the petition for May 27th.

According to Jerusalem expert Daniel Seidemann (of the Israeli NGO Terrestrial Jerusalem), now that the tender has been issued and awarded, construction of Givat Hamatos is now “virtually inevitable.” Givat Hamatos has long been regarded as a doomsday settlement by parties interested in preserving the possibility of a two-state solution, in that it will prevent the division of Jerusalem into an Israeli capitol and a Palestinian capitol (if the Givat Hamatos settlement is built, the Palestinian neighborhood of Beit Safafa in East Jerusalem will be completely surrounded by Israeli construction, severing its connection to the West Bank). Regardless of the implications of Givat Hamatos on a two state solution, the impact of the new settlement on the Beit Safafa neighborhood are nonetheless significant.

Explaining how Netanyahu bears direct responsibility for the highly consequential decision to move ahead with Givat Hamatos, Terrestrial Jerusalem writes:

“Netanyahu could have made this ‘go way’ at ZERO political cost to himself. He could have said truthfully: I tried, but the Court didn’t let me. Instead, he pulled out all plugs and instructed the State Attorney to aggressively pursue the rescission of the injunction. He went out of his way to make this happen. The tender process may now be completed, after which construction is virtually inevitable.This is happening because Netanyahu wants it to happen. This is happening now, because Netanyahu wants it to happen now.”

Ir Amim punctuates its analysis of the move by writing:

“The fact that the ILA hastened to announce the winners of the tender only 6 hours before Joe Biden’s inauguration serves to underline how determined the Israeli government is to create as many facts on the ground as possible before Biden takes office.”

Regarding the prospects of its petition against the Givat Hamatos tender, Ir Amim writes:

Cashing In Before Trump Cashes Out, PART 2: Israel Issues Tenders for 2,572 Settlement Units

On January 20, 2021 – inauguration day in the U.S., the Israeli government issued tenders for the construction of 2,572 units (total) in settlements across the West Bank, as well in East Jerusalem. Now that the tenders are issued, construction companies are invited to bid to win the contract. Peace Now estimates that building is likely to happen within two years from now.

The issuance of these tenders comes in addition to the Givat Hamatos tender (see section above) and the advancement of plans for 780 more settlement units (see section below).

Commenting on the tenders, Peace Now said in a statement:

“Our out-of-touch government leadership continues to press on with its mad scramble to promote as much settlement activity as possible until the last minutes before the change of the administration in Washington. By doing so, Netanyahu is signaling to the incoming President that he has no intention of giving the new chapter in US-Israel relations even one day of grace, nor serious thought to how to plausibly resolve our conflict with the Palestinians.”

Cashing In Before Trump Cashes Out, PART 3: In Final Hours of Trump Era, Israel Advances Plans for 780 Settlement Units Across the West Bank

At its final meeting of the Trump era — which took place the day before Joe Biden’s inauguration — Israel’s High Planning Council advanced plans for 780 new settlement units. This includes final approval for plans for a total of 365 units plus the expansion of an industrial zone and approval for deposit for public review (one of last steps before final approval) for a total of 415 units, including retroactive legalization to two illegal outposts.

Commenting on the Council’s actions, Peace Now said in a statement:

“By promoting hundreds of settlement units, Prime Minister Netanyahu is once again putting his personal political interests over those of the country. Not only will this settlement activity erode the possibility for a conflict-ending resolution with the Palestinians in the long-term, but in the short-term it needlessly sets Israel on a collision course with the incoming Biden administration.”

Specifically, plans granted final approval by the Council include:

Plans the Council approved for deposit for public review include:

Netanyahu’s Bid for Mass Legalization of Outposts Fails (For Now)

Despite an intensive last ditch effort, Netanyahu did not succeed in pushing through a government decision to grant retroactive legalization to dozens of outposts in the waning hours of the Trump era.

According to reports, Netanyahu made a last minute effort to gain Gantz’s support for a more narrow authorization – for 6 outposts instead of the 43 outposts as included in an earlier draft government decision. Gantz reportedly blocked Netanyahu’s proposal from coming up for a vote at the Israeli government cabinet meeting on January 19th, saying that “no diplomatically irresponsible proposal will be raised at such a sensitive time.” Other reports suggest European leaders intervened to make their objections to outpost authorization clear.

According to Haaretz, Netanyahu made several attempts to get the decision passed, including convening a call with Israel’s Attorney General to make progress. During that call Netanyahu complained that “jurists” were getting in his way. Netanyahu then surprised Gantz by adding the outpost issue to the Cabinet’s meeting planned for January 19th (a meeting devoted solely to the COVID-19 crisis).

FMEP has traced this saga for weeks – from the time when Likud and Blue & White officials were collaborating to draft such a decision, to last week’s news that Gantz decided to continue blocking the move despite a private meeting with settlers asking him to give his OK. It’s worth reiterating that Gantz has made clear he is not opposed to granting retroactive legalization to outposts, but is opposed to this manner of doing so. Gantz prefers for each outpost to be considered on an individual basis.