On Monday, October 25th the Israeli Supreme Court held a key hearing on the case of the Palestinian Duweik family, the fate of which holds monumentous reprecussions for 85 other families in the Batan al-Hawa section of Silwan, all of which are similarly fighting eviction proceedings initiated by the Ateret Cohanim settler group. Contrary to expectation, the Court adjourned without reaching a verdict on the case, but in the course of the hearing the Court’s jurists did the following:

Last week, after repeated extensions on a Court-ordered deadline, the Israeli Attorney General finally submitted his position on the case to the Court. The document submitted by the Attorney General was only 1 page, and simply stated that the case does not merit intervention either on the specific case of the Duweik family or the wider legal principle at stake, which threatens an additional  85 families living under threat of eviction in Batan al-Hawa.

As a reminder, Ateret Cohanim has waged a years-long eviction campaign against Palestinians living in Silwan, on property the settler NGO claims to own. In total, Ateret Cohanim’s campaign stands to ultimately dispossess 700 Palestinians (85 families) in Silwan. The group’s claim is based on having gained control of the historic Benvenisti Trust, which oversaw the assets of Yemenite Jews who lived in Silwan in the 19th century. In 2001 the Israeli Charitable Trust Registrar granted Ateret Cohanim permission to revive the trust and become its trustees, (following 63 years of dormancy). In 2002, the Israeli Custodian General transferred ownership of the land in Batan al-Hawa to the Trust (i.e., to Ateret Cohanim). Since then, Ateret Cohanim has accelerated its multifaceted campaign to remove Palestinians from their homes, claiming that the Palestinians are illegally squatting on land owned by the trust. 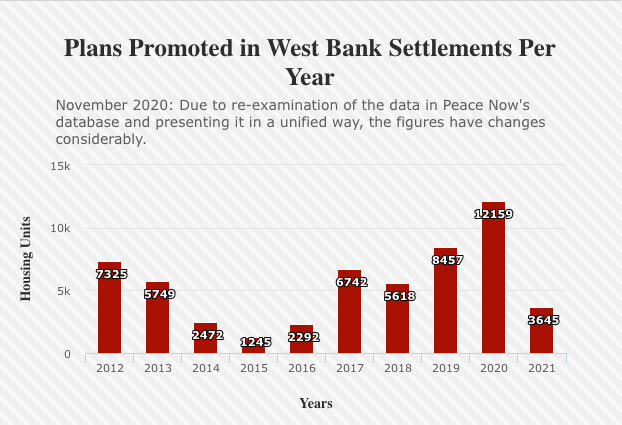 On Wednesday, October 27th the Israeli Civil Administration advanced plans for a total of 3,130 settlement units in 25 settlements across the West Bank. Of that total, the Israeli body gave its final approval to 1,804 units, including two plans which will grant retroactive legalization to two unauthorized outposts – effectively creating two new legal (under Israeli law) settlements. The numbers appear higher than what was reported last week, which can be accounted for by different methods of counting units by the Israeli Civil Administration and the settlement watchdog Peace Now – which argues the Israeli government double counts some units “for certain bureaucratic reasons.”

Details on the units advanced this week can be found in last week’s Settlement Report. 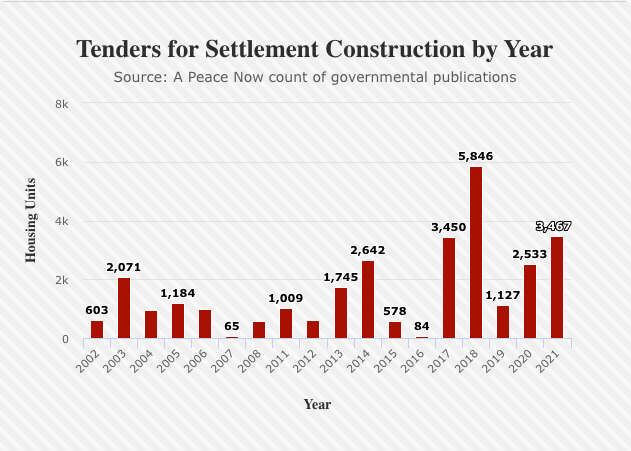 Now that the tenders are published, contractors will bid on the projects and the Housing Ministry will award the tender. Following that, construction may commence. [graph]

The following tenders were published this week:

At the announcement of the tenders, Minister Elkin said in celebration:

“Strengthening and widening the settlements in Judea and Samaria is a necessary and very important part of the Zionist enterprise.”

Peace Now said in response to the new tenders:

“Unfortunately, there is no longer any doubt that this government is not a government of change but rather a government of annexation. The commitment to a political status quo in settlements turned out to be a lip service on the way to continuing Netanyahu’s annexation policy. It is unfortunate to see how while the right is celebrating another step towards the total prevention of a Palestinian state, supporters of the two states within the government are silent. Labor and Meretz must wake up and demand an immediate halt to the construction rampage in the settlements that harms the prospect of a future political solution.”

According to Haaretz, while announcing the publication of 1,355 settlement construction tenders, Housing Minister Elkin also announced that his ministry plans to double the settler population in the Jordan Valley by 2026, saying that he intends to advance plans for 1,500 new settlement units in the area. Haaretz further reports that the ministry’s initiative in the Jordan Valley will have a budget of nearly $70 million (224 million shekels).

In widely reported diplomatic news, the U.S. State Department has been engaged with its Israeli counterparts over the past week to offer its criticism of the multiple settlement advancements announced by Israel over the past week.

According to Axios, the following interactions took place:

Haaretz dubbed this U.S. criticism “harsh.” The Washington Post called it a “rebuke.” The Jerusalem Post called it “strong opposition” and said that the statements made by Price are the “​​strongest statement to date on the matter.” The Times of Israel called it “ire.”

However, Axios reports and important viewpoint from with the Israeli government:

“Senior Israeli officials admit that the U.S. position on settlements was tougher than they had expected, but note that the criticism is coming mainly from the State Department, with the White House not weighing in publicly for now.”

And further, despite U.S. criticism of Israel’s settlement activity, the U.S. formally announced that it is considering adding Israel to the Visa Waiver Program – – which has been a longtime ask of Israel but has, to this point, not been implemented by successive Democratic and Republican administrations (including under Trump) due to a multitude of concerns, including Israel’s systematic discrimination against Arab Americans at Israeli ports of entry.

Divisions within Naftali Bennett’s governing coalition are locking horns over a proposal to grant retroactive legalization to the unuathorized outpost of Evyatar, which has been the site of sustained Palestinian protest and routine violence inflicted on the protestors by settlers and the IDF alike. Evyatar is located just south of Nablus on Jabal Sabih, which is land historically belonging to nearby Palestinian villages, including Beita, on a a strategic hilltop between the villages of Beita, Yatma, and Qablan.

The division within the coalition falls along predictable lines, with Interior Minister Ayelet Shaked (Yamina) pushing for legalization (under Israeli law) of the outposts, and leaders of the Labor and Meretz parties opposed – with Labor leader Merav Michaeli calling the proposed move a “red line.” The settler-run media outlet Arutz Sheva reports Labor and Meretz leaders have met with Bennett and “made it clear to him that Evyatar will not be resurrected. The Labor party will not lend a hand.”

Responding to Michaeli’s statement, Shaked told Channel 12 News that “despite Michaeli’s statement – Evyatar will be established.” Shaked enjoys the support of veteran settler leader Daniella Weiss, a leader of the Evyatar settlers. Weiss predicts that the government will move to legalize the outpost within two or three weeks. Weiss further told Arutz Sheva:

“I see that the time is trickling out. There is a stopwatch. We know there are discussions and I hear that there are intentions to bring the yeshiva and the fifty families back to Evyatar…there is progress that we in Nahala and the Samaria Council know about. It is not yet intended for public information.Things in politics progress at a different pace.”

The fate of the Evyatar outpost was the first controversy that threatened to divide the fragile Bennett-led government when it was sworn in. Bennet’s partners were bitterly divided on whether to evacuate the outpost or let it be, while the government sought to grant it retroactive legalization. In the end, the government reached a “deal” which saw the settlers (temporarily) vacate the outpost on Friday, July 2nd. In return, the government left the settlers’ illegal construction at the site in place (i.e., did not demolish it) — including buildings and roads —  while it “examines” the status of the land to see if it can be declared “state land” and therefore “legally” turned into a settlement (opening the door for the settlers to return). Under the agreement, the outpost is being used as a military base in the interim.

The fact that the “compromise” left in place the settlers’ structures and allowed Israel to maintain complete control over the site during the “survey” process signalled from the start that the government is not concerned with enforcing Israeli law, but rather is focused on finding a political solution that works for the settlers. It was further clear from the terms of the “compromise” that the Bennet government believed it will be succeed in finding a pretext to assert that the land on which the outpost stands is “state land” which can be used by the state as it sees fit (i.e., give it to the settlers). If the state decides, pursuant to the investigation, that it has a basis on which to declare the site to be “state land,” the settlers will be allowed to return and resume the establishment of what would from that point no longer be an illegal outpost, but a new “legal” settlement.

On July 8, 2021, Palestinians submitted a petition to the Israeli High Court of Justice that challenges the agreements the Israeli government and settlers struck. The petition against the deal is led by the local councils of Beita, Yatma and Qabalan (three villages whose land is impacted by the outpost) and a group of nine individual Palestinian landowners. The petitioners seek the demolition of all illegal settler structures and infrastructure at Jabal Sabih, and the lifting of an military seizure order for the land issued by the Israeli army in the early 1980, based on security reasons (i.e., in order to build a military base at the site). The petition further seeks an investigation into the officials and entities that assisted the settlers in establishing the outpost, including Defense Minister Gantz, the Israeli Civil Administration, and the settler regional council governing the area (the Shomron Regional Council).

The petitioners also seek to prove to the Court that they are the rightful owners of the Jabal Sabih land. Since the land was not registered under the Jordanian government at the time Israel took control over the West Bank (after which Israel promptly froze the land registration process, making it impossible for Palestinian to register land), the petitioners are using Ottoman tax records as well as aerial photos to document and demonstrate that they own the land and cultivated it prior to the time the area was seized by the Israeli army in the 1980s.  Notably, by the 1990s the IDF no longer used Jabal Sabih as an army base, yet Israel continued to define the area as a closed military zone and continued to actively prevent Palestinians from accessing and cultivating their land.

Now, as Palestinians seek to have Israel recognize their ownership, the fact that Israel has closed the land to its Palestinain owners for such a long period may itself become the basis for Israel declaring that the land is now “state land.” Such a declaration would be based on the twisted logic holding that since Palestinian owners failed to cultivate the land for more than 10 years — years when Israel actively prevented them from doing so — these owners have in effect abandoned their rights to the land and it is legally state land. [And no, this isn’t a joke.}

On October 24th, the director-general of the Israeli Construction & Planning Ministry, Aviad Friedman, announced that the government will include settlement housing in a new long-term rental housing program managed by the government. The extension of Israeli domestic law to settlements located outside its borders – often called “extending Israeli sovereignty” – is an act of formal, even if undeclared, annexation.  It is a tactic that Israel has used to gain more and more control over not only the settlements but over the entire West Bank. For more examples of de facto annexation, see FMEP’s table tracking such efforts from 2016-2020 [see Table 2 of 3].