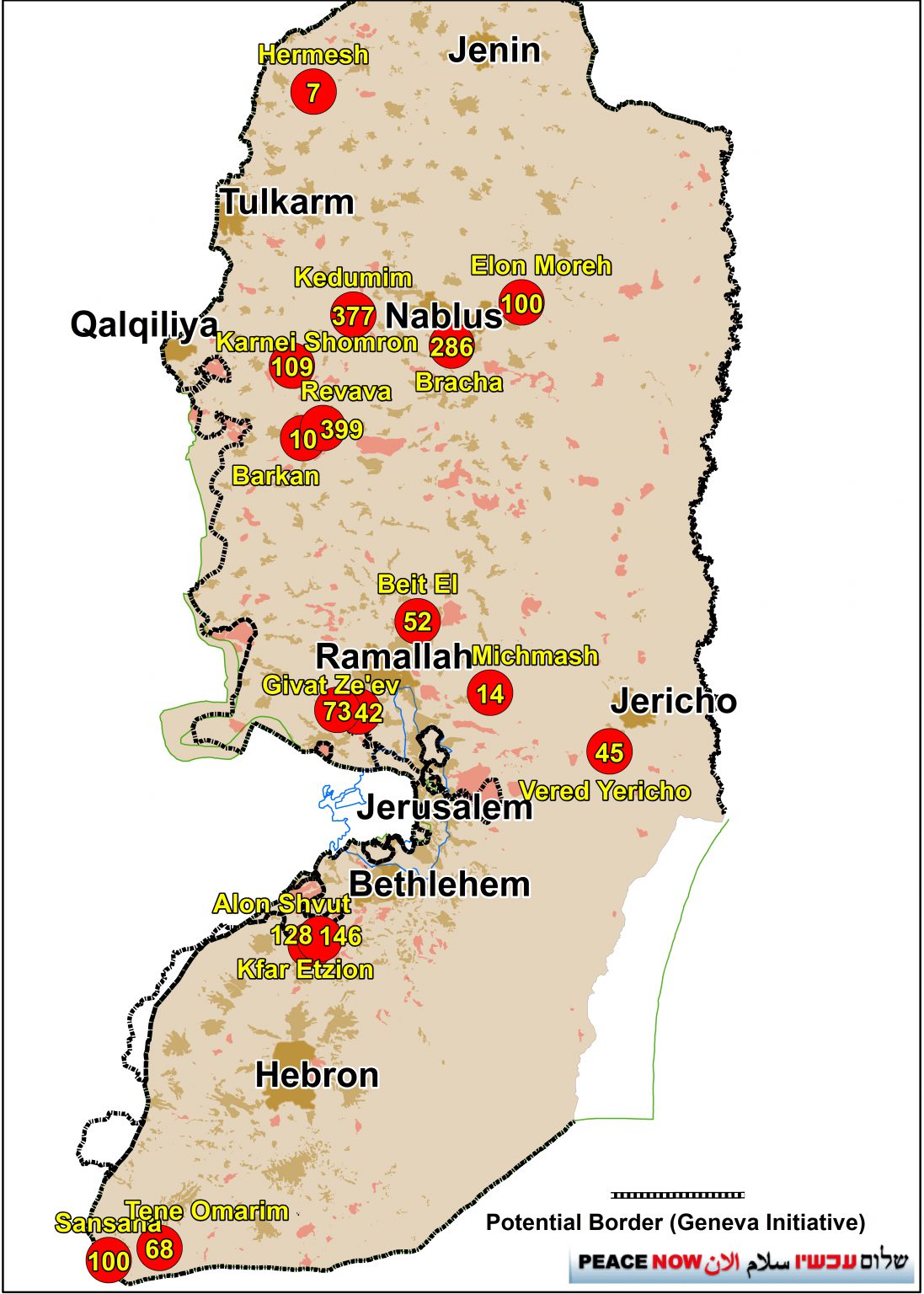 On August 12th, Israeli Defense Minister Benny Gantz announced that the High Planning Council will convene on August 18th to advance 2,259 new settlement units, as part of projects across the West Bank. Of these, 908 units are slated to receive final approval, including many units in areas beyond Israel’s security barrier. This will be the first time that the High Planning Council (HPC) has convened in 10 months, and it will be the first time a large number of settlement units has been advanced since Biden entered the White House. As a reminder, the HPC is a body within the Israeli Civil Administration (which is a part of the Israeli Ministry of Defense) that has authority over construction planning and approvals for both settlers and Palestinians in the West Bank (the HPC does not have authority with respect to settlement construction in East Jerusalem; since Israel annexed the area in 1967, Israeli domestic Israeli planning authorities are in charge there).

The plans expected to receive final approval include:

“The approval of thousands of housing units in the settlements harms the Israeli interest and the chances of reaching peace. It seems that the approval of a handful of plans for the Palestinians is only intended to try to reduce criticism of the government and to please the US administration ahead of Prime Minister Bennett’s expected visit to Washington in the coming weeks. For years, Israel has pursued a policy of blatant discrimination that does not allow almost any construction for Palestinians in Area C, while in the settlements it encourages and promotes the construction of thousands of housing units each year for Israelis. The approval of a few hundred housing units for Palestinians can not cover up discrimination and does not change the fact that Israel maintains an illegal regime of occupation and discrimination in the territories.”

In announcing plans to advance over 2,000 new settlement units, Defense Minister Gantz also announced his intention to issue permits for 863 houses – some of which will be issued for existing structures – for Palestinians living in Area C. Haaretz reports that the permits are being advanced in order to buy the consent of the few members of the Israeli governing coalition that oppose settlement construction, and as “calculated risk” with respect to the Biden administration.

As a reminder, Area C is the 60% of the West Bank where Israel enjoys absolute authority and has systematically denied Palestinian building rights, while promoting the expansion of settlements and unauthorized outposts.  If issued, these permits for Palestinians will be the first issued by Israel in years, and the first of any significant size. Only 21 building permits were issued to Palestinians between 2016 to 2018, while 2,147 demolition orders were issued in the same period.

Commenting on the announcement of the planned permits (which, given past experience, there is no reason to assume will ever be issued) Peace Now said:

“It is a very small expansion of the Palestinian villages and a drop in the ocean in terms of real Palestinian development needs.”

Peace Now reports that these permits, if they are ever issued, might be for:

In reporting over the past week, Axios journalist Barak Ravid has documented the efforts by the Israeli and U.S. governments to square conflicting positions with regards to settlement growth.

On the U.S. side, the Biden Administration has appeared to take pains to make room in its official discourse to begrudgingly tolerate settlement construction. While the U.S. has criticized the new batch of settlement advancements, until this week the U.S. had reportedly identified three actions it has asked Israel to refrain from, notably not including settlement expansion. Those three actions are: the demolition of Palestinian homes, the eviction of Palestinians from their homes, and the establishment of new outposts in the West Bank. The U.S. is also reportedly asking Israel to take positive steps to stabilize the Palestinian Authority, which is suffering from economic shortfalls and crashing levels of popular support.

For it’s part, Israeli press suggests that the Bennett government reduced the number of upcoming settlement advancements in order to appease the Biden Administration. The Israelis wanted to advance 3,623 plans, but announced a total of 2,259 (a 39% cut according to Jerusalem Post). Axios also reports that the Israeli government is assertively framing its settlement policy as one of restraint, prioritizing settlement projects that address the supposed “natural growth” needs of existing settlements.

“While ‘natural growth’ has no formal definition, it has generally been used in the settler context to mean population growth due to births, as contrasted to growth due to immigration from Israel or other places. But in numerical terms (according to Israeli official statistics), taking into account deaths and people migrating out of settlements, births inside the settlements account for approximately 60% of the annual population growth in settlements, while around 40% is immigration from inside Israel or abroad. So clearly population growth in settlements is not simply a matter of births.  Perhaps this is why some excuse-makers have expanded ‘natural growth’ to include other ways that families can grow, from non-settler spouses to aged non-settler relatives moving in.

“Regardless of what definition people want to use, the fact is that ‘natural growth’ is not a legitimate argument against a complete freeze in settlement construction. Yes, settlers, like people everywhere, indeed have the right to have babies, and yes, their children indeed have the right to grow up and have families and homes of their own. But nowhere in the world – not in New York, or Paris, or Tel Aviv – do people have an inalienable right to live exactly where they want – in the size home they want, in the neighborhood they want – irrespective of real estate market factors, or any political, economic, zoning, or other considerations that may come into play (including in this case, considerations about actual land ownership). Inside Israel, just like in other countries, people regularly face difficult decisions about where to live, given that major cities like Tel Aviv and Jerusalem are crowded and little affordable housing is available.

“Settlers have the right to have babies and to take in their parents or grandparents. When settler children grow up they have the right to start families and have homes of their own. But the settlers must do what people everywhere must do: reconcile their needs as best as possible to the housing market, which is affected not only by demand but by a myriad of other variables – including, in this case, the fact that settlers have knowingly and voluntarily chosen to make their lives on land that is the subject of a political dispute of global proportions.”

“The Biden administration knows we are going to build. We know they don’t like it, and both sides don’t want to reach a confrontation around this issue.”

An Israeli government source summarized the dance going on between the respective governments by saying:

“[The U.S.] will express opposition to this move, but everyone wants this impossible coalition in Israel to hold out… It was clear for Bennett he would not have been able to advance this move after his meeting with [U.S. President Joe] Biden at the end of the month, so as not to damage their relations, and that’s why he had to announce it as early as he did.

A lawyer representing the Palestinians involved in these demolition cases said his clients intend to file for permits for the structures, which were built on land that Palestinians assert they own. Israel argues that the land is public land.

This week, an Israeli crew began construction on a new elevator leading to the Ibrahimi Mosque/Tomb of the Patriarchs in Hebron, arguably one of the most sensitive religious sites outside of Jerusalem. The project to install accessible infrastructure at the site has been backed and pushed by settlers for over two decades and provides a means by which the State of Israel has increased its control over the site. The project is roundly opposed by Palestinians along with archaeologists and other experts. The Israeli archeology group Emek Shaveh explains its opposition:

“We claim that while the plan is couched in terms of concern for the disabled and elderly worshippers, in actual fact it is unilaterally advancing changes to a site mired in deep political controversy…The size and characteristics of the structure demonstrate that at issue is not simply a lift for persons with disabilities, but a significant change to the compound.  The lift will constitute a change in the status quo and a strengthening of the settlers’ control of the holy site.  Ignoring the fact that the site falls under the auspices of the Hebron Municipality is evidence that Israel is further reneging on its commitments to agreements signed in the past with Palestinians.”

Atarot Settlement Plan to Be Discussed on December 6th

As expected, the Jerusalem District Planning and Building Committee has set a date – December 6th – for the advancement of the Atarot settlement plan. This plan would allow for the construction of 9,000 settlement units, to be built on the site of the former Qalandiya airport (located at the northern tip of East Jerusalem).

The Atarot settlement plan dates back to 2007. It was pursued by the Israeli government in 2012 but shelved under pressure from the Obama administration. The plan came back into consideration in April 2017 (a few months following the inauguration of President Trump) when it was rumored to be included on Netanyahu’s master blueprint of settlements for which he was seeking U.S. approval. In February 2020, following the publication of the Trump Plan – which designated the area that would be used for the settlement as a “special tourist zone” for Palestinians –  the Atarot settlement plan was formally introduced. In January 2021 then-Prime Minister Netanyahu dangled the advancement of the plan as an incentive for parties to join his flagging coalition in order to remain in power.

In its current form, the plan provides for up to 9,000 residential units for ultra-Orthodox Jews (assuming, conservatively, an average family size of 6, this means housing for 54,000 people), as well as synagogues, ritual baths (mikvehs), commercial properties, offices and work spaces, a hotel, and a water reservoir. If built, the Atarot settlement will effectively be a small Israeli city surrounded by Palestinian East Jerusalem neighborhoods on three sides and Ramallah to its north.

There are currently 15 Palestinian families living in buildings on the land slated for the settlement, part of which is privately owned by Palestinians. Other land in the area has been declared “state land” by Israel or belongs to the Jewish National Fund. To solve the problem of Palestinian land owners, the Israeli government will need to evict the Palestinians living there and demolish their homes — a step that will be facilitated by the fact that all of the homes lack Israeli-issued building permits (which are essentially impossible for Palestinians to receive). The private Palestinian landowners will then be subjected to a non-consensual process of “reparcelization,” in which Israel will unilaterally reparcel and then redistribute the land amongst its owners on the basis of the value of the land (as determined by Israel) and the percentage of their ownership claim.