Haaretz reports that on August 25th the Israeli government was expected to approve a plan to expropriate 17 acres (68 dunams) of privately owned Palestinians land in order to widen Route 55, a road running east-west in the West Bank in a manner simultaneously serving settlements in the northern West Bank while fragmenting Palestinian life the West Banks.  Haaretz reports that despite promises to the contrary made by Israeli planners, the road will not be accessible to Palestinians.

Thirty-five Palestinian land owners – all of whom run plant nurseries on the targeted land – fought this expropriation plan and even proposed a compromise plan, but last week the Israeli High Planning Council rejected both their objections and the compromise they proposed.

By expanding Route 55 (at the high expense of Palestinian landowners) lsraeli is aiming to more seamlessly connect the Israeli town of Kfar Sava, located inside the Green Line, to settlements located near the Palestinian village of Qalqilya. The widened road should also be understood as preparation for more settlement growth, with plans already in the works for 5,650 new settlement units to be built adjacent to the road.

For more on how Israel uses highway infrastructure to advance annexation and settlement expansion, see this December 2020 report by Breaking the Silence.

Ir Amim reports that on August 25th, Israeli forces demolished one building housing two Palestinian families (14 individuals) in the village of Al-Walaja on the southern border of Jerusalem, specifically in the section of the town that was included inside of the expanded municipal borders of Jerusalem. The demolition is notable because the vast majority of Palestinians living in this section of Al-Walaja also face demolition orders, and mass demolitions (and accompanying wide scale displacement) can happen at any time.

Adding to the sense of imminent threat and rapidly changing conditions, the families living in the building demolished this week were only notified of the demolition order on their homes a few months ago. The families submitted an appeal against the order, but that appeal was rejected by the Jerusalem Magistrate Court 10 days ago and the families were not given any further notice of when the demolition was scheduled to take place. The families, therefore, had not yet filed an additional appeal to the District Court.

Ir Amim explains what is transpiring in al-Walaja:

“Since 2016, roughly half of the homes in the East Jerusalem section of Al-Walaja have received demolition orders and roughly 25 of these have been carried out. Indeed, most of the homes in the vicinity of the home demolished yesterday are under demolition orders and three of them were demolished just in the last two years.  An appeal submitted by the village to the Israeli Supreme Court has led to temporarily freezing 38 of the pending demolition orders in the village. Recently, the State Attorney’s Office requested that the Supreme Court reject the appeal. If the court does reject it, 38 demolitions are likely to happen quickly. Some 12 additional homes are also at risk of imminent demolition. Demolitions in Al-Walaja are due to two combined Israeli policy decisions: On the one hand, Israeli authorities have never made an outline plan for the annexed part of Al-Walaja and residents therefore have no possibility of obtaining a building permit. All construction that has taken place in Al-Walaja since 1967 is thereby considered illegal under Israeli law. On the other hand, in 2016 the government decided to increase home demolitions – specifically targeting Palestinian communities. Since that year, the National Enforcement Unit (under the authority of the Ministry of Finance) began issuing and carrying out demolition orders in Al-Walaja. This unit is the most aggressive of the Israeli enforcement units. The combined effect of no outline plan and aggressive enforcement has led to half of the homes of the Jerusalem section of Al-Walaja currently being under threat of demolition. In January of this year (2021), the al-Walaja’s community most recent attempt to advance the outline plan they prepared for their village was rejected by the Jerusalem District Committee. Meanwhile, Israeli construction plans of thousands of housing units around Al-Walaja are advancing – including a new settlement on the Western side of the village. Indeed, demolitions in Al-Walaja are part of the creeping annexation Israel is advancing within the Greater Jerusalem area, specifically with the aim of connecting settlements near Bethlehem to Jerusalem, which would effectively fragment the Palestinian space of the southern West Bank.”

Emek Shaveh reports that the Israeli Civil Administration has approved a plan to renovate an archeological and holy site in the Nabi Samwil village, located just north of Jerusalem. The plan will see the construction of a new access road, a visitors area, a restaurant, a learning center for tour groups, a shop, and a conference room. 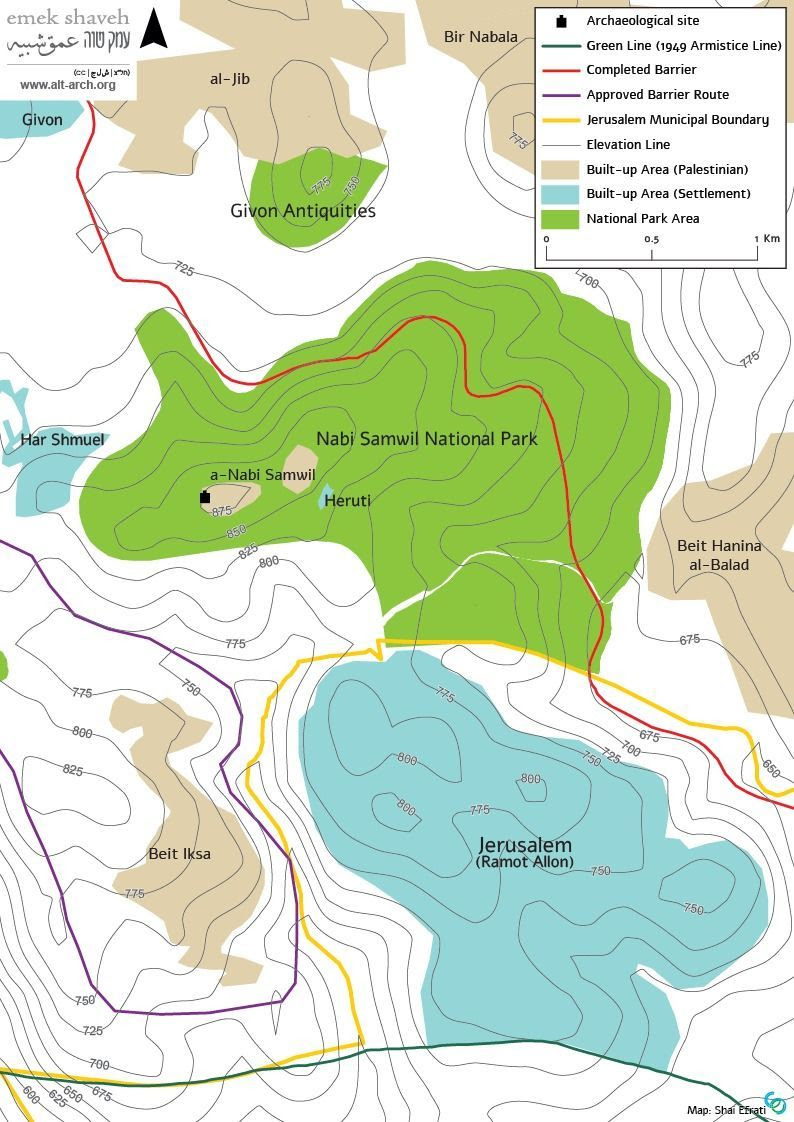 The plan to invest in the development of this tourism site ignores the longtime suffering of the Palestinian residents of Nabi Samwil. This small village is located on a strategic and highly prized hilltop (inside an area that Israel has declared to be a national park) located just outside of the municipal borders of Jerusalem but on the Israeli side of the separation barrier. This location places the village’s residents — who remain in the eyes of the Israeli government residents of the West Bank, for whom access to Jerusalem is forbidden without a special permit — in a Kafka-esque situation: they are cut off from the West Bank by the separation barrier but barred entry to Jerusalem. They are legally forbidden from taking the one road out of the village because it passes through Jerusalem, and the West Bank is accessible to them only via a circuitous route that passes through an Israeli checkpoint (for background see: The Palestinian village where Israel forbids everything, and this Twitter thread of resources curated by Lara Friedman). The suffocation of Nabi Samwil is in line with Israel’s long-time ambitions to completely de-populate the village and take control of the land.

In April 2020 – during one of the most intense periods of the COVID-19 lockdown last year – the Israeli military closed off the village entirely, and enforced the closure with only 14 hours’ notice for residents.

In a new analysis, Ir Amim explains how the Jewish National Fund’s upcoming decision on a proposal to start the process of registering land it claims to have purchased in the West Bank and East Jerusalem will serve as a means for mass land seizure. The JNF’s Board is expected to convene in the coming weeks to approve the plan.

“Anchoring KKL’s ownership claims to these lands is a dramatic move that puts entire Palestinian communities in jeopardy. This move is yet another troubling indication of how the recently enacted land settlement of title and registration process in East Jerusalem is being misused. As uncovered by Ir Amim over the last several months, this registration process – that has been advanced by the Israeli government – is unprecedented in both scope and consequence and is being used as a mechanism to register lands under Israeli ownership, which in the future could lead to settlement construction and displacement of entire Palestinian communities in East Jerusalem. The dangers these measures pose to Palestinian life in Jerusalem cannot be overstated, nor the severity of the political interests that are behind it. Given that the Sheikh Jarrah eviction cases attracted international attention, it is important to understand that the Israeli exploitation of the land registration process will involve vast areas of East Jerusalem, and therefore will lay the groundwork for future eviction demands against Palestinians several magnitudes larger than seen today.”

As a reminder, the JNF, established in 1901, devoted itself to buying land for Jews. Today, the JNF owns about 15% of all the land inside the Green Line (a figure which stands to increase if the review process leads to more properties being registered to the JNF). In addition, the JNF has used two subsidiary companies – both called Himanuta – to purchase land in the West Bank, even though the stated JNF policy (until now) did not support such purchases. Peace Now reports that the JNF, via Himanuta, has already purchased over 160,000 acres (65,000 dunams) across the West Bank; settlements established on some of those lands include Itamar, Alfei Menashe, Einav, Kedumim, Givat Ze’ev, Metzadot Yehuda (Beit Yatir), Otniel and more. At the same time, the JNF and the settler group Elad have been partnering together to pursue the mass eviction of Palestinians from East Jerusalem neighborhoods, including Silwan.

Bennett Goes to Washington to Talk Iran, But Questions on Settlements Remain

According to reports, Prime Minister Bennett’s priority for his first meeting with President Biden – now scheduled for August 27th – is Iran. However, in the lead up to that meeting Bennett has not been able to escape questions and pressure around the issue of settlement growth and annexation.

In an interview with the New York Times ahead of his meeting, Bennett said that his government is not looking to solve the question of Palestine, but also said that he has no plans to formally annex West Bank territory [although de facto annexation policies are proceeding apace) nor to end the siege on Gaza. Bennett said:

“This government is a government that will make dramatic breakthroughs in the economy. Its claim to fame will not be solving the 130-year-old conflict here in Israel. This government will neither annex nor form a Palestinian state, everyone gets that.”

In the interview, Bennett also briefly reiterated that his approach to settlement construction is limited to projects that address the supposed “natural growth” needs of existing settlements [for Lara Friedman’s take-down of this framing, see here].

Even before the New York Times interview, Bennett was facing significant discontent from settlers over the low number of settlement units [in the eyes of the settlers] that were included in the first planning wave under the Bennett-led government. Articulating that discontent, and calling on Bennett to buck what they see as U.S. pressure to limit settlement growth, settler leaders spoke out earlier this week. Binyamin Regional Council head Israel Gantz said:

“We urge you to remember where you came from and to tell the Americans that you are changing your policy and intend to build as needed. All ready-made construction plans in Judea and Samaria must be approved.”

“Prove to us that you are not a [US] puppet that is being played.”