The Israeli government deposited three major settlement plans for public review this week. As noted by Peace Now, all of these plans are related to efforts to legalize outposts located near, but not directly adjacent to, existing “legal” settlements — in effect creating three new settlements under the cover of legalizing “neighborhoods” of existing ones. Two of the plans deal with outposts located in the Jordan Valley; the third deals with an outpost located east of Ramallah. 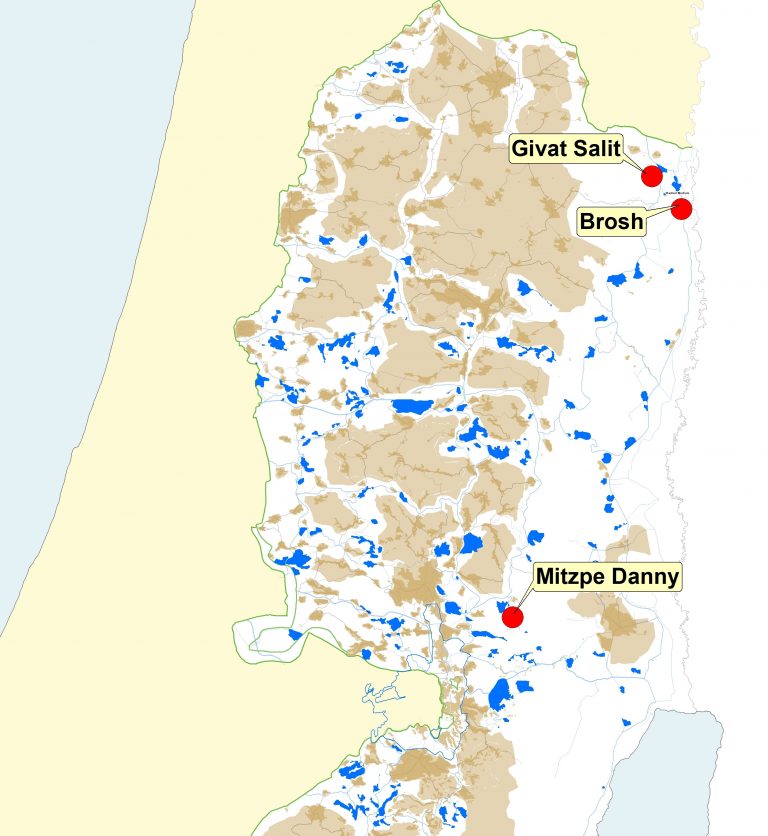 The deposit of these plans comes in the context of the government’s exploration of legal means to retroactively legalize outposts. A task force appointed by the Israeli government recently issued a report – known as the Zandberg Report – recommending that the government adopt a very flexible understanding of legal criteria for handling isolated outposts located near to settlements. Peace Now explains:

“In the Zandberg Report there is a detailed reference to situations of outposts built away from the mother settlement. Under the descriptive name ‘hanging islands,’ the regularization team suggests that the planning principle that expansion of settlements should be made adjacent to the existing settlement (‘adjacent planning’) should be applied in a ‘flexible manner’ in the Occupied Territories.”

Specifically, the settlements plans deposited for public review are:

On July 24th, hundreds of Israeli settlers snuck into the site of the long-evacuated settlement of Sa-Nur, located northwest of Nablus, to protest against the Cabinet’s decision to block a bill aimed at allowing the settlement to be rebuilt/re-populated.

The protest was led by settlers who were evacuated from four settlements in the northern West Bank (Sa-Nur, Homesh, Ganim, and Kadim) as part of the 2005 Disengagement Plan, which also saw Israel evacuate its settlements from the Gaza Strip. Bayit Yehudi MKs Mualem-Rafaeli and Bezalel Smotrich, who were part of the group that infiltrated the site, have been promoting a bill that would overturn the 2005 disengagement plan, allowing Israel to reclaim the land and rebuild the settlements.

“Over the past year and a half, we have been pushing for the cancelation of that Disengagement Law that was imposed on the northern Samaria, which unfortunately has gone up to the Ministerial Committee again and again and has failed to pass due to a veto by the prime minister. As we mark 13 years to the expulsion, to the complete darkness cast over the Jewish settlement that was destroyed in the communities in the northern Samaria, we are turning the light back on. We’re still committed to this place.”

“Mistakes must be remedied. There isn’t a child who doesn’t understand this expulsion has been foolishness. The discussion is with the prime minister and the defense minister. The answer as to why this law hasn’t been canceled yet is at the hands of Netanyahu. We already learned that when public pressure is created, we eventually achieve the goal, as we did with the Regulation Law.”

Members of Israel’s top academic council slammed Education Minister Naftali Bennett (Jewish Home) for interfering in their work. The controversy surrounds Bennett’s intervention to expedite the approval of a new medical school in the Ariel settlement. That school opened in June 2017, with a ceremony attended by Bennett and the school’s largest financial-benefactor Sheldon Adelson. During a meeting of the Planning and Budgeting Committee of Council of Higher Education [known as “Vatat”] on July 25th, three committee members read a letter of protest, saying in part:

“Bennett’s intervention in the committee’s professional work is being done almost publicly….Recently Vatat has made decisions in an expedited and improper fashion, and even by circumventing the committee. These decisions were made without exhaustive academic and professional discussion and contrary to accepted procedures. The source of these decisions is motivations which, in our opinion, stem from extraneous considerations that erode the high standards that characterize the decisions of the Planning and Budgeting Committee, a situation that undermines the values and needs of higher education.”

“In violation of accepted procedures that are in place for more than 15 years, the [medical school’s] approval was hastily inserted into the agenda of a meeting scheduled months in advance to discuss readying the budget for the next academic year, in preparation for the budget’s approval a week later. t’s not proper that such an important decision be discussed in haste. We are well aware of the need to increase the number of medical students in Israel, but a hasty decision may actually do more harm than good.”

According to Haaretz reporting, it is highly unusual for committee members to publicly criticize the committee’s work. Because the letter was read aloud during the committee’s meeting, the contents will be included in the official meeting minutes, making the members’ criticisms a matter of public record.

Prof. Yaffa Zilbershats, who was appointed by Naftali Bennett to head the Planning and Budgeting Committee in 2015, issued an official written statement defending the process by which the Ariel settlement’s medical school was approved. The statement read in part:

“…there is no political intervention in the work of the committee..The professional committees did a comprehensive examination and submitted all the required materials to the Vatat members for discussion. The materials were sent in time, and all the time necessary was devoted to a discussion at the meeting…There is no place to argue that the decision to establish the medical faculty in Ariel undermined the budget work.”

As FMEP has previously reported, Ariel University became an accredited Israeli university in 2012, following significant controversy and opposition, including from Israeli academics. It has since been the focus of additional controversy, linked to what is a clear Israeli government-backed agenda of exploiting academia to normalize and annex settlements. Earlier this year, in an act of deliberate de facto annexation, the Israeli Knesset passed a law that extends the jurisdiction of the Israeli Council on Higher Education over universities in the settlements (beyond Israel’s self-declared borders), ensuring that the Ariel settlement medical school (and its graduates) are entitled to all the same rights, privileges, and certifications as schools and students in sovereign Israel.

As a reminder, Ariel is located in the heart of the northern West Bank, reaching literally to the midpoint between the Green Line and the Jordan border. The future of Ariel has long been one of the greatest challenges to any possible peace agreement, since any plan to attach Ariel to Israel will cut the northern West Bank into pieces.

Yair Lapid Presents (Yet Another) Rorschach Test on His Settlement Policy

Now a key Lapid talking point, the Yesh Atid party leader also explained why he refuses to be more specific:

“The great mistake of the Israeli left over generations has been its willingness to always starts negotiations by announcing what it will give up and what it will not give up.”

Beyond a negotiating strategy, Lapid (who presents himself as a centrist) has been on a publicity tour over the past months in what is widely seen as a bid to win some of Netanyahu’s (mostly right-of-center) supporters ahead of the next elections. As part of this effort, Lapid (whose party is currently polling in second place in a hypothetical election) has presented a rorschach-like test for voters with respect to settlements, likely hoping that his deliberate ambiguity will lead voters to see whatever it is they want to see. Formerly a devout two-state supporter, Lapid’s recent, less-than-specific settlement statements include: