The Associated Press has published new satellite imagery (captured by Planet Labs Inc.) showing the expansive, transformative growth of the Amichai and Bruchin settlements over the past five years – a period defined by the Trump Administration’s pro-settlement policy. 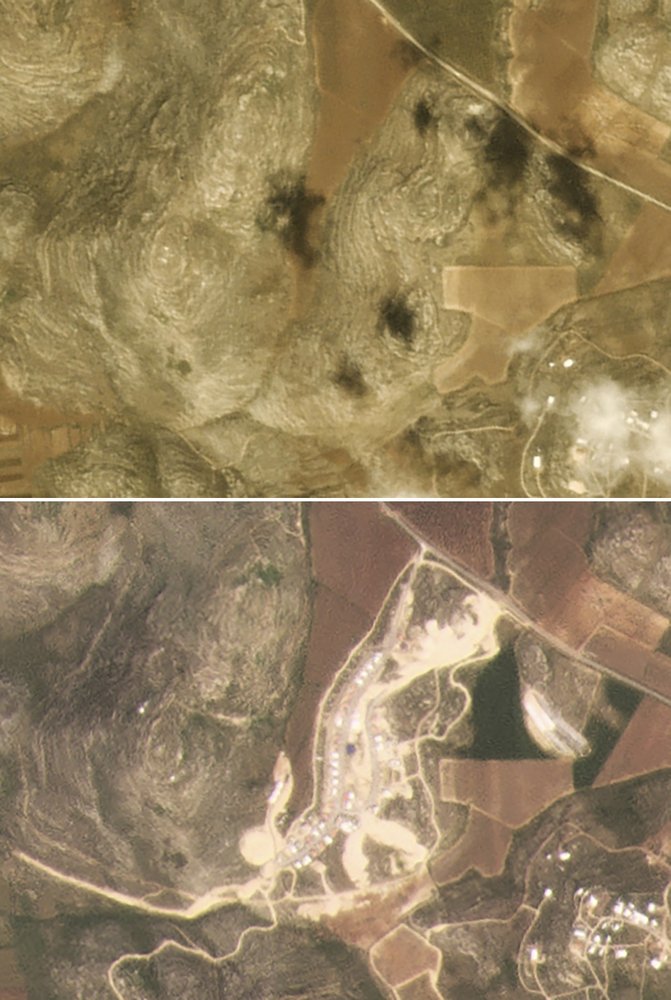 The AP story offers analysis on the predicament facing the Biden Administration, which has articulated support for a two state outcome but has not specifically taken Israel to task for its ongoing settlement construction. The Amichai and Bruchin settlements illustrate this point – both are located in the Shilo Valley region of the West Bank, in a finger of continuous settlements that extends from the 1967 Green Line to the Ariel settlement in the very center of the northern West Bank, cutting the northern West Bank in half. It’s worth recalling that, when the Amichai settlement was built, a settler proudly proclaimed that the settlement would nullify the possibility of a two state outcome.

The new aerial imagery of the Amichai settlement – which was approved in 2017, making it the first new settlement formally approved by the Isareli government in 25 years – is particularly jarring. The images (one from 2017 and the second from 2021) show a previously empty hilltop with cultivated fields nearby transformed into a sizable suburban neighborhood. In addition to the pictured new construction, Amichai was also massively expanded, subsequent to its initial construction, when the Israeli Civil Administration announced that its plan to retroactively legalize the Adei Ad outpost by significantly expanding the borders of the Amichai settlement to turn Adei Ad into a (non-contiguous) neighborhood. In effect, this was a slight-of-hand by Israel to turn the Adei Ad outpost into an entirely new official, legal settlement.

Ir Amim reports that the Jerusalem District Planning Committee will now meet on April 20th — one day earlier than previously scheduled — to hear objections filed by members of the public (one of which has informed the Court that they are not available on that date) against a plan to build the Har Homa E settlement. Simultaneously, the District Planning Committee set a date for a second meeting on the plan for April 27th, at which time the committee is able to grant final approval (and is expected to do so).

“Although one of the individuals who filed an objection to the plan is not available on the new date, the District Committee refused to reschedule. It should be noted that this move is uncharacteristic and underscores the acute pressure on the authorities to approve the plan…While the convening of two separate sessions does seldom take place, the scheduling of the second discussion so rapidly is unordinary and again indicates the immense pressure to expedite approval of the plan.”

Although the Har Homa E plan is framed as an expansion of the Har Homa settlement in East Jerusalem, it is more properly understood as a new settlement since the buildings will be built in an open area that is not contiguous with the built-up area of Har Homa. The plan calls for 540 new settlement units to be built in the area between the Har Homa settlement and the site of the planned Givat Hamatos settlement, tenders for which were issued in January 2021. Meaning that the new construction is a significant step towards completing a ring of Israeli settlements on Jerusalem’s southern edge and encircling the Palestinian neighborhood of Beit Safafa.

As anticipated, the executive committee of the Board Directors of the Jewish National Fund (called the JNF-KKL) voted in favor of approving the adoption of a policy to officially make the purchase of land in the West Bank a part of the group’s mission. The policy will next be voted on by the full Board of Directors, which JNF Chairman Avraham Duvdevani hopes to see happen next week. As a reminder, the JNF-KKL voted in February 2021 to allocate $12 million towards the purchase of land in the West Bank, even though the policy had not been formally approved.

Notably, Duvdevani also intends to have the new policy, assuming it is adopted, applied retroactively to land purchases the JNF made in that past that fell outside of the group’s publicly stated mission. This intention demonstrates once again that this new policy is nothing more than a shift in public relations, given that the JNF has long worked in support of settlements, but until this point has left settlement-related activities deliberately obscured.

Haaretz also reports that the policy voted on by the Executive Committee this week does not have a restriction on the JNF’s ability to purchase land in the Nablus and Jenin areas. That restriction was cut out of the newest iteration.

Terrestrial Jerusalem has published a comprehensive look into the recent news that the Jerusalem Municipality is planning to demolish 70+ Palestinian homes in the al-Bustan section of Silwan, in a move that appears to contradict over ten years of agreement between the municipality and Palestinians to find alternate housing for the targeted families. In addition to recapping what exactly happened and adding more details to what has been reported thus far (the report is must-read), Terrestrial Jerusalem explains how this situation came about.

“Al-Bustan is a target because more than any other Palestinian neighborhood in East Jerusalem, it is an obstacle standing in the way of one of the most important settler/government projects anywhere in East Jerusalem and the West Bank: the socalled restoration of purportedly biblical Jerusalem through genuine artifacts, invented facsimiles, and attractions reminiscent of the pseudo-biblical theme park. Al-Bustan is right in the middle of it.”

Emphasizing the significance of the demolitions pending in Al-Bustan, Terrestrial Jerusalem writes:

“Our analysis above leads to cautious and tentative conclusions indicating that the Bustan demolitions, as abhorrent as they are, have not yet become an acute issue. An important caveat is to be added to this conclusion: over the last few years, the government of Israel has started deviating from policies of restraint that have been a constant since 1967, and is engaging in actions that would have been unthinkable a few years ago. The demolition of al-Bustan is highly compatible into these new policies.Since 1967, Israel was able to transfer 220,000 of its residents to the settlement neighborhoods of East Jerusalem without the largescale displacement of Palestinians.

“The last such largescale displacement took place on the night of June 10, 1967, when the Mughrabi Quarter was razed, and its residents expelled. Nothing remotely similar has taken place in East Jerusalem since then. This, by no means, is meant to detract from the devastating impact the settlement enterprise has had on individual families that have been targeted and displaced by settlers, and the impact this has had on entire Palestinian collective in East Jerusalem. However, the policy of refraining from largescale displacement has recently changed, and is no longer a taboo…”

“The staggering humanitarian implications of mass demolitions in these areas are accompanied by compelling geopolitical ramifications. For the first time since 1967, settlement enclaves that were dis-contiguous with Israel are now becoming extensions of pre-67 Israel, and in a pincer movement: the Old City is being surrounded both on the north and the south by built up Israeli areas.”