On August 1st, senior Israeli government officials were on hand to celebrate the beginning of construction on a new settlement complex, under the guise of a cultural center, located in the heart of the Batan al-Hawa section of the Silwan neighborhood in East Jerusalem. The event was heavily guarded by Israeli forces, in an open acknowledgement of the provocative nature of the settler campaign targeting Palestinian homes in Batan al-Hawa, which is located near the walls of the Old City in view of the Temple Mount/Al Aqsa Mosque. 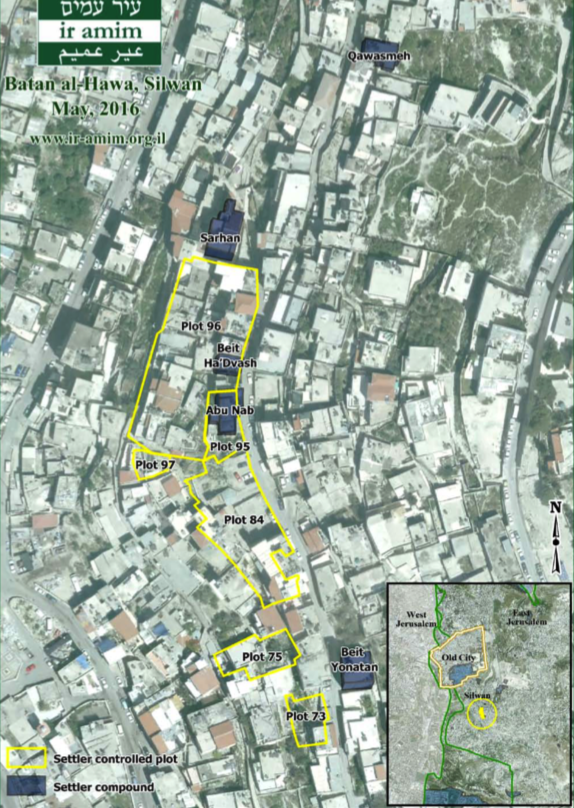 The new settlement initiative is part of a campaign by the Ateret Cohanim settler organization (which works to establish Jewish enclaves inside densely populated Palestinian neighborhoods of East Jerusalem) to exploit the area’s historical connection to Jewish immigrants as a pretext for taking land and establishing Jewish-Israeli control over the area. Israel’s Ministry of Jerusalem Affairs and Ministry of Culture and Sport are contributing an estimated $1.23 million USD to the cost of renovating an old Yemenite synagogue into a settler-run Jewish Yemeni heritage center — in a example of how the government is directly funding extremist settler activity in an area that Ir Amim identifies as “the site of the most substantial settler takeover campaign in Jerusalem since the annexation of East Jerusalem in 1967.”

Attendees at the launch included Cultural Affairs Minister Miri Regev, Jerusalem Affairs Minister Ze’ev Elkin (who is currently campaigning to become the mayor of Jerusalem), former U.S. presidential candidate and governor (and father of the current White House spokeswoman) Mike Huckabee, and former White House Communications Director Anthony Scaramucci (the latter two have been touring Israel and praising the settlements, with Huckabee going so far as to suggest that he might want to have his own home in a settlement someday).

The launch of the project ignores an ongoing legal case before the High Court of Justice that could affect Ateret Cohanim’s ownership claim to the land and building in question. Settlers are acting on the assumption that both are legally owned by the Benvenisti Trust (a historic trust that resettled Jewish Yemenite immigrants in the area in the late 1800s). Ateret Cohanim took control of the Benvenisti Trust in 2001, and in 2002 the Israeli Custodian General transferred land in Batan al-Hawa to the Trust/Ateret Cohanim. Since then, Ateret Cohanim has accelerated its multifaceted campaign to remove Palestinians from their homes, claiming that the Palestinians are illegally squatting on sacred religious land owned by the Trust.

So far, Ateret Cohanim has acquired the deed to six Palestinian homes in Batan al-Hawa, inserting some 20 Israeli Jewish families in place of evicted Palestinian residents. The organization has eviction orders pending against an additional 21 homes, with 800 Palestinians at risk of eviction.

On June 17, 2018, just two months ago, the Israeli High Court of Justice ordered the Israeli government to provide more information regarding its decision to transfer ownership of land in Batan al-Hawa to the Benvenisti Trust/Ateret Cohanim. The Court’s order was in response to a petition filed by Palestinian residents fighting eviction from their homes, and the State’s admission during oral arguments on June 10, 2018 that the land had been transferred to the Benvenisti Trust/Ateret Cohanim without a proper investigation into its legal status. The petitioners argue that the State’s decision to transfer the land was illegal on two fronts: (1) The Benvenisti Trust never owned the land in Batan al-Hawa, but only owned the buildings – all but one of which were demolished in the 1940s; and, (2) the land was transferred without the necessary legal notification to the residents living there.

“We know that this was a well-orchestrated plan to force us to leave. And if we stay, it will paralyze us and isolate us in our homes.”

In a 2016 report that covers the Batan al-Hawa situation in detail, Ir Amim and Peace Now underscore the significance of Ateret Cohanim’s efforts, of which the new cultural center would be the crowning jewel:

“If the settlers are successful, Batan al-Hawa is anticipated to become the largest settlement compound in a Palestinian neighborhood in the Historic Basin of the Old City, with the outcome of significantly tightening the emerging ring of settlements around the Old City and severely undermining the possibility of a future two state solution in Jerusalem.”

“Every acquisition is very difficult. We’re up against a mobilized Arab world, parts of which are violent. There is huge pressure and millions of dollars are being pumped in to strengthen the Arab hold on the city…[the] biggest problem is trying to get the Jewish world to understand what needs to be done. We have the best relations ever with a US administration. For [US Vice President Mike] Pence and [US Ambassador to Israel David] Friedman and the others, [settling Jews in East Jerusalem] is a no-brainer. What’s our right-wing government waiting for? It’s not about what the US says. It’s about what we do. We are not doing anything to stop the peace process but will not compromise on a millimeter of Jerusalem. You have to show strength of conviction and sovereignty to have peace and coexistence. This can only happen when you live together under Jewish sovereignty.”

“Look around. We are surrounded by Jewish heritage. The archaeologists won’t find a single Palestinian coin here! We have come home.”

The Israeli Committee of University Heads wrote a letter to the Higher Education Council  demanding that it reconsider the approval granted to the new medical school in the Ariel settlement, which is already under construction. In a letter addressed to the Chairman of the Planning and Budgeting Committee of the Higher Education Council, Israeli university heads expressed concern that the decision to approve the medical school was tainted by political interference, and was carried out by an “expedited and improper” procedure. A source told Haaretz that the University Heads share a concern “that the Planning and Budgeting Committee [of the Higher Education Council] will be turned into a rubber stamp for [Education Minister Naftali] Bennett.” The signers call on the Planning and Budgeting Committee to hold new hearings on the settlement school to reconsider the data and merits of the proposal.

The letter comes on the heels of claims made publicly last week by three members of the Planning and Budgeting Committee that Education Minister Naftali Bennett interfered in the committee’s work, in order to expedite the approval of the medical school despite the fact that information about the project was missing.

As FMEP has repeatedly covered, the Ariel medical school is part of a government-backed agenda of exploiting academia to normalize and de facto annex settlements. Earlier this year, a part of this effort, the Israeli Knesset passed a law that extends the jurisdiction of the Israeli Council on Higher Education over universities in the settlements (beyond Israel’s self-declared and internationally recognized sovereign borders). This move ensures that the Ariel settlement medical school (and its graduates) are entitled to all the same rights, privileges, and certifications as schools and students in sovereign Israel. The Ariel settlement medical school enjoys the financial backing of American casino magnate, settlement benefactor, and close friend of President Trump Sheldon Adelson.

Defense Minister Avigdor Liberman promised to advance plans for 400 units in the Adam settlement in response to a Palestinian knife attack in the settlement that resulted in the death of one settler and injury to two others. In a tweet, Liberman claimed: “The best answer to terrorism is the expansion of settlements,” continuing, “That’s why I left this morning to promote a plan to build 400 housing units in Adam and approve it in planning institutions in the coming weeks.”

The Times of Israel notes that Liberman’s promise for 400 units is not a new plan but part of an existing plan – for a total of 1,000 units – already being advanced. Liberman’s promise is better understood as a signal to the High Planning Council to expedite the approval of the plan that is already in motion.

The Palestinian Authority issued a sharp criticism this week of U.S. Ambassador David Friedman – and U.S. policy – after Friedman traveled to the Adam settlement to pay a condolence call on the widow of a settler murdered in a terror attack. Although Friedman is not the first U.S. Ambassador to visit an Israeli settlement, Friedman has made a habit of it (see here, here, and here for example), leading some observers to point out the self-evident fact that the Trump administration has – without making an official announcement – adopted a concrete change in U.S. policy regarding settlements, and is now not only refraining from criticizing settlement expansion, but is actively engaged in actions that legitimize settlements.

This week the Palestinian Authority said in a statement that the Trump administration and its “religious Zionist staff” were:

“continuing to make a mockery of international law in a bid to impose their positions and policies, which are blindly biased in favor of the Israeli occupation, on the international community with unprecedented arrogance.”

In a rare moment of agreement, settler leaders articulated a similar view of regarding this shift in the Trump Administration’s settlement policy, with the Binyamin Regional Council issuing a statement after Friedman’s visit saying:

“It seems as if we are talking about a change in US policy with respect to the Jewish communities of Judea and Samaria…they are being treated just like the rest of the country.”

Hananel Durani, head of the powerful Yesha Council which advances the interests of the settlements, said:

“I hope the US government will continue to support Israel and the settlements with the same kind of courageous friendship the ambassador demonstrated today.”

Settler leader Oded Revivi, who is head of the Efrat settlement council and foreign envoy for the Yesha Council, commented:

“I want to express my appreciation to Ambassador Friedman who saw fit to visit the settlement of Adam in Binyamin and comfort the bereaved family. This sends an important message to the world regarding strengthening the positive forces and combating the negative forces in the region.”

Peace Now recently released two 2018 settlement maps, one map the entire West Bank and a second detail map of East Jerusalem. Both are must-have resources for anyone tracking anything related to settlements and the factors that must be addressed in a negotiated solution to the conflict.